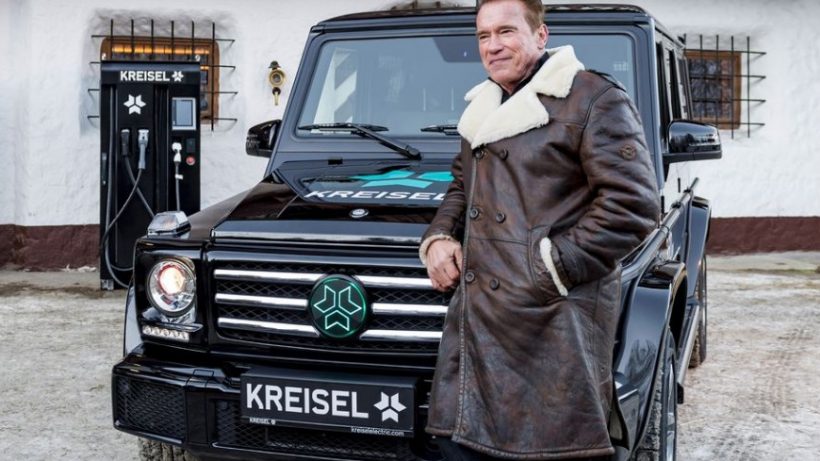 Maybe you know him as The Terminator. Or perhaps you recognize him as the 38th Governor of California, and it’s the only Republican governor since. Maybe you remember him as a world champion bodybuilder with biceps and pecs, so perfect. Moreover, they earned him a spot in the Guinness Book of World Records as the Man with the Most Perfect Body. It’s safe to say, no matter what Arnold does, he does it big.

According to a recent article about the Hollywood strong man, for a man who started out as a weightlifting enthusiast and bodybuilder back in the 1960s, Arnold Schwarzenegger, estimated to be worth around $400 million. But still, he remains a very modest man.

However, that modesty doesn’t extend to his love of fast cars and rugged SUVs. He is said to own around 15 of them, all outfitted to the 9s with the best audio systems, leather interiors, high-end tires, and precise detailing. Arnold might even buy subwoofers (check them out from CarToys.com) to add a big bottom to his big audio systems because the big buyer, no matter how humble, can’t help but do everything big! You get the picture here.

All that said, here are eight of Arnold’s favorite rides to scoot him around the Hollywood Hills. 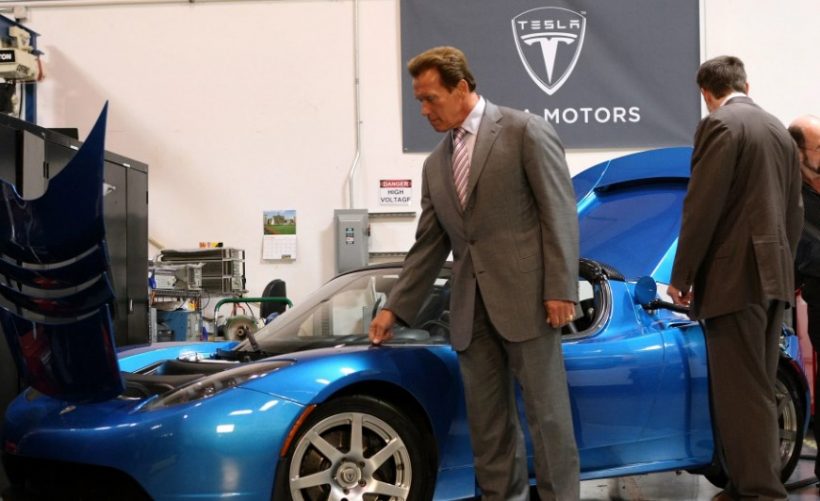 It also turns out that Arnold is a man ahead of his time. Prior to Elon Musk rolling out his famous high-end Tesla electric vehicles en masse, Arnold picked up one its first Model S Roadsters. This car is not the same ride you see and hear about in the automotive websites. In fact, when it was originally introduced, it ended up being quite the flop.

The Model S was and is a fully electric car outfitted with great audio and other amenities, but  no, this is not the Tesla Roadster you’ve been reading about in automotive news. The first version of the Roadster was just a simpler version of what was to come. It was still a fully electric car, but its overall performance was said to be terrible compared to the current model which produces 248 horsepower.

Still, it might not be his biggest ride, but the Roadster remains one of Arnold’s favorite cars, perhaps due to its green, environmentally sound engineering. How much did the Terminator pay for the Model S? Around $100,000. Mere pocket change. 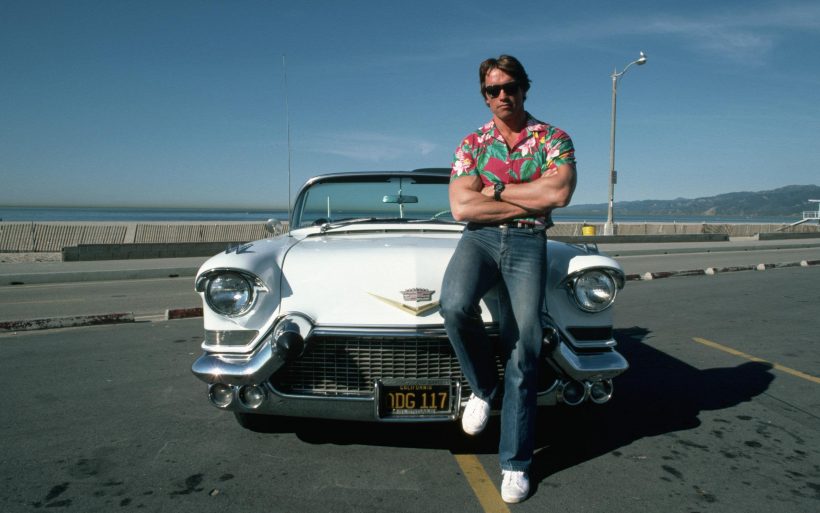 Back when Arnold was still a Hollywood newbie in the early 1970s, he was able to snatch himself a classic Cadillac Eldorado Biarritz, color white. The car is said to possess the classic look that automobiles of the rich and famous movie stars were driving at that time.

The Eldorado was big, chunky, and the front fascia was very “expressive.” The young and hungry Arnold used his new Eldorado to get him from Malibu to the movie studios and back again. Top down, of course. 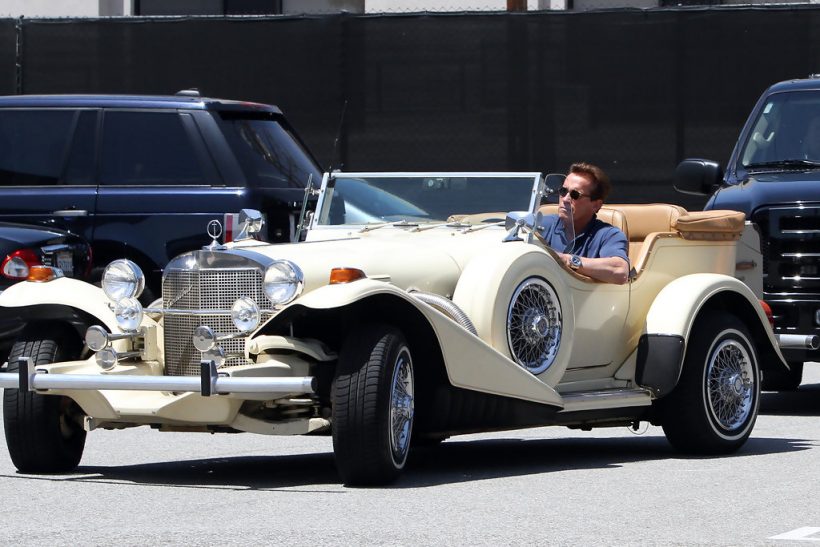 Arnold is said to enjoy an eclectic assortment of vehicles. One of the rarer cars is the Excalibur. The old car is not common for movie stars since it’s so rare. It’s distinguished by its strong vintage appearance.

If you can find one, it has a price tag of around $89,000. All models are said to be a little bit different from each other, which means some are more expensive than others. 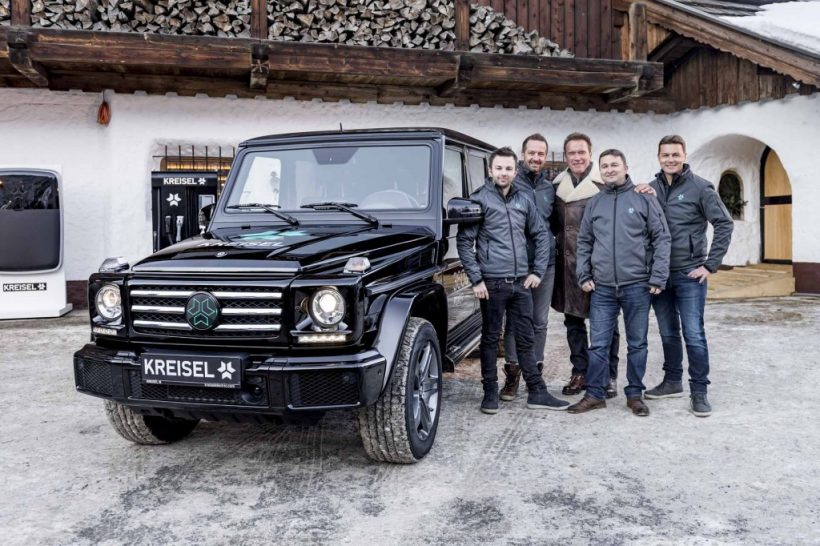 Arnold Schwarzenegger loves big beefy cars. Or so the rumor goes. After all, he’s a big beefy dude. But that might explain his fascination for the Custom Kreisel Electric G500 SUV. According to Arnold, he loves the SUV. Upon his first outing in the electric vehicle, he described its ride as “fantastic.”

The Kreisel is said to be one big, powerful machine with a very powerful future.

5. The Hummer H1 Slant Back

Arnold would not be Arnold if not for the Hummer H1 Slant Back. At one point he owned so many Hummers he became almost synonymous with the military vehicle. A major supporter of America’s brave men and women in uniform, and a veteran of the Austrian army himself, the Hummer will probably go down as his all-time favorite, especially the desert sand-colored vehicle. It’s the very military vehicle he utilized in several of his marketing campaigns. 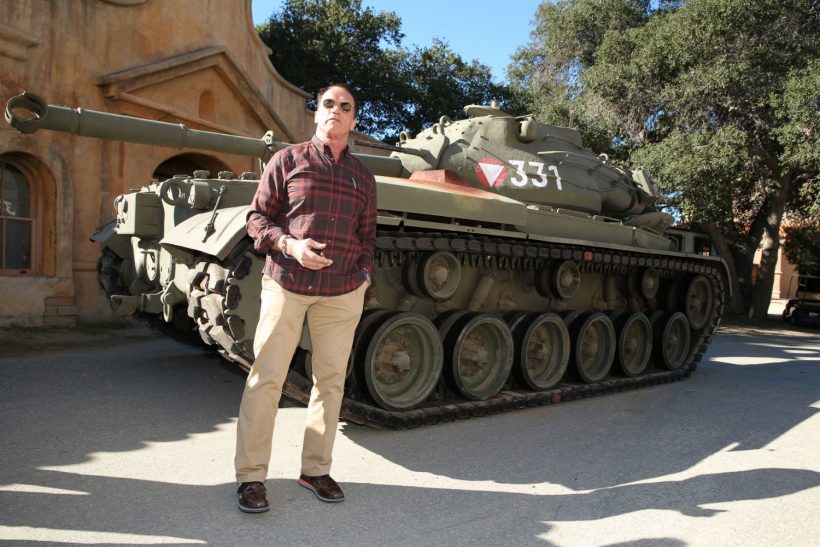 This one is Arnold’s favorite vehicle among all. Arnold drove tanks in the army and he loves driving this M47 around TinselTown. It was engineered in 1951 for the Korean conflict and came equipped with an 810 horsepower Chrysler V12 engine. It’s also got a canon!

Word on the street in Hollywood is that Arnold shelled out $20,000 just to have the huge tank shipped to his home. You have to wonder if he’s installed a state-of-the-art audio system inside it. He uses it mostly to crush cars just for fun and for charity. After all, big guy, big heart. 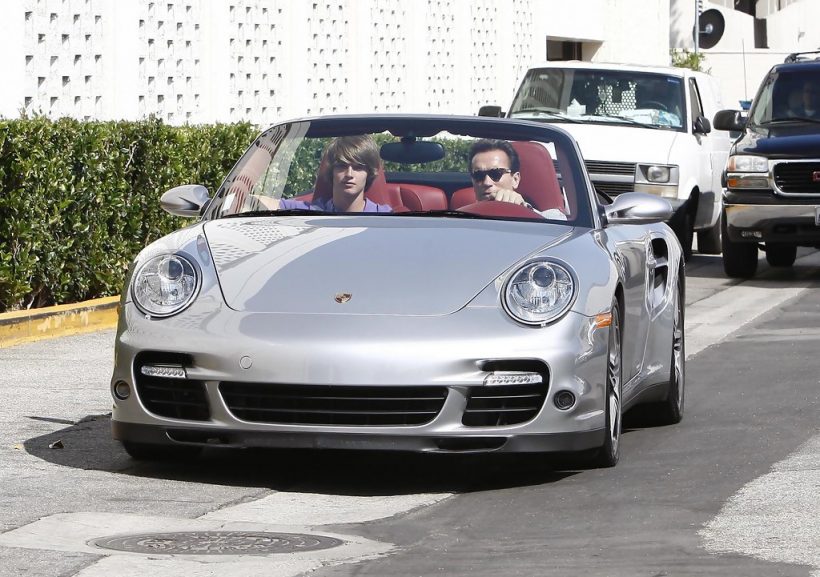 Another addition to Arnold Schwarzenegger’s car collection is the Porsche 997 Turbo Cabriolet. It is one of the fastest convertibles in automobile history.

This car is a 2010 model with a silver body having red interiors. Additionally, it is powered by a 4.0-liter and a straight 6 engine, which can generate a maximum of 650 Nm of the peak torque and 493 Bhp.

But with the acceleration of 0-60 miles per hour in 3.4 seconds makes this Porsche a perfect choice for such a celebrity like Arnold.

It is another convertible in Arnold’s garage. You can’t ignore him driving the 2011 Bentley Continental Supersports. In fact, you can’t ignore the price tag of this car. Currently, it’s valued with an average cost of nearly $115,995.

The latest upcoming model (2023) is even high-speed, powered by 650 hp with a W-12 engine. The speed features sports car special styles that include a Speed Badging with 22-inch wheels and having microfiber interior upholstery and optional carbon-fiber dashboard trim.