Toyota Innova has been in its second generation from 2015 and if you are not located in Southeast Asia, you probably never heard of it, let alone about Kijang, its predecessor which sprung all the way to 70’s. Mentioned second generation of Innova was launched in Indonesia, where it is produced and later was revealed in India, Philippines, Thailand, Vietnam, Middle East and finally, we can say to Malaysia as this model has been just officially introduced.

The previous generation was in production for nine years, and despite having three facelifts, there are limitations in plastic surgery too. The new model looks fresh and aggressive inline with Toyota recent trends. Latest refresh of the outgoing model introduced grille that was quite large, but new one offers even bigger and much more imposing one. We could say that rear of the car received less attention, but it is an improvement over predecessor which featured such a faceless design that you could mistake it for many other MPVs easily. The whole car is still pretty boxy, as the function is way over style here, but at least it is mean-looking box now.

New Toyota Innova 2017 is 35mm taller, 55mm wider, and also 150mm longer, which should be evident in cabin roominess, but surprisingly wheelbase length remained same at 2,750mm long, so all new inches are reserved just for better exterior appearance. Despite being compact MPV it can seat 8 in good enough comfort, so while you are sitting in the third row, you are going to learn to appreciate that boxy look. One huge step forward would be interior design. The previous model was bleak, dark-grayish, and featuring Toyota’s design clues from the beginning of the century. The new interior is modern, confusing (as with all new Toyota’s), and with wood and chrome inserts. Since this is uniquely designed car for special markets, the interior doesn’t have quality adequate to regular Toyota’s models, but it is close enough. 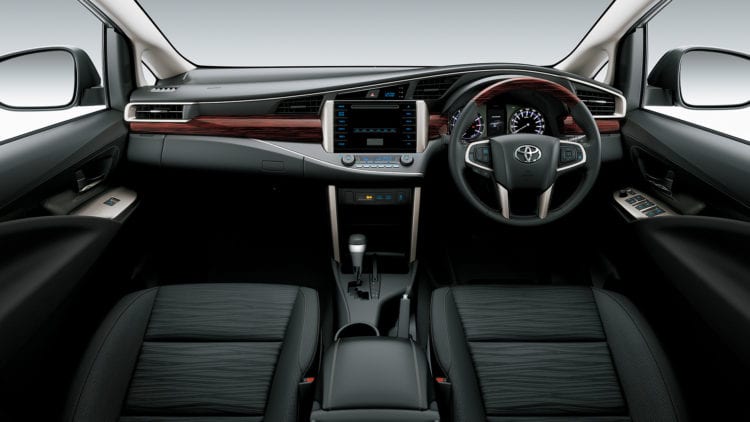 The engine remains the same, 2.0-liter petrol engine producing 139hp and 183Nm of torque, but now it features Dual VVT-I technology, which apparently has improved the fuel economy in a significant manner as today’s 9.1L/100km is visibly less than yesterday’s 11.2L/100km. The car is 100 kg heavier than before, probably due to increased size, unless Toyota is trying to reverse trends in reducing weight upon introducing a new model, in that case, we should stop them. Unlike for engines, you have a bigger choice of gearboxes, as you can opt for 5-speed manual and 6-speed automatic, which replaced old 4-speed from the previous model.

As there aren’t many choices in the engine department for 2017 Toyota Innova as you saw, similar is with trims, as only two levels are offered.. The base trim is pretty generous, and it includes 16-inch wheels, power adjustable side mirrors with signal lamps, rear spoiler with LED stop lamp, 6-speaker audio system with Bluetooth, USB, AUX, and MP3 connectivity. Furthermore, we have glove box with cooler, engine start/stop button, ABS with EBD, front & rear parking sensors and much more. This is far from all as we get chrome radiator grille, LED roof ambient lighting, Brake Assist, Electronic Stability Control, Traction Control, Hill-Start Assist, Emergency Stop Signal, keyless entry and much more, to get these options you have to go for second and altogether top trim level. 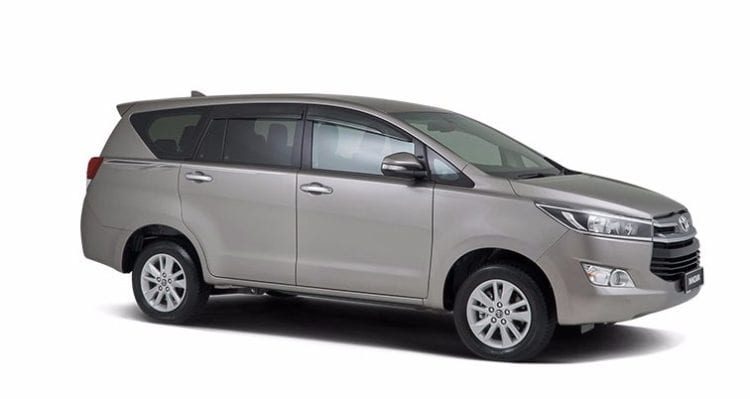 The price tag is RM109,000, and it goes all the way to RM126,000 in Malaysia. That would be around $25,000 to $28,000, and we think that your jaw has just dropped! But if we tell you that Camry in Malaysia starts from $35,000 which is $12,000 above US price, you can slowly close your jaw now. So, Innova has a good price tag in given circumstances, now it has brand’s modern design, funky interior, and it can seat eight people, all enough to forget about its shortfalls.