Toyota revealed FT1 concept car in 2014 during North American International Auto Show, and the jaws were dropping. These days Toyota is joining forces with BMW, so new Z4 is going to be accompanied by the new Supra, and both cars will be produced together in Magna Steyr factory near Graz in Austria. Any news about Supra enlightened the day for all fans of it and believe us when we say there are many of them.

Keep in mind that the last one of it, left the factory in 2002 and it is still holding the record as fastest Toyota of all times, as Supra’s twin turbo version managed to accelerate to 60 mph in 4.6 seconds, which is good even by today standards. Since release date for new Supra is not officially known yet, let us remind you of Toyota FT1 concept, which gave all fans firm belief that they are looking in the future reincarnation of their beloved legend. 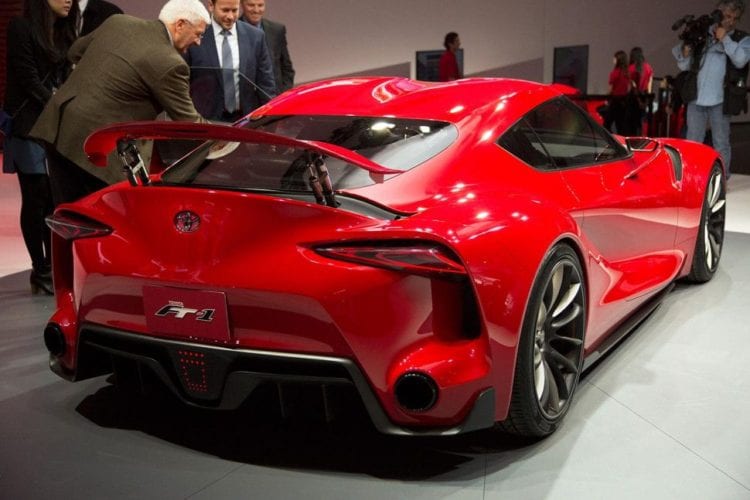 It is a concept car, so nobody knows for sure, expect Toyota’s officials, whether it has a higher meaning. FT part of the name stands for “Future Toyota,” and number one is, well, number one. It was designed by Calty Design Research, and Alex Shen chief designer stated “our team was heavily influenced by Toyota’s sports car past, especially Celica and Supra, and we sought to capture some of that history. It is an aggressive, track-focused sports car concept with a presence that has been amplified for shock and awe.”

While no one has the desire to contradict that statement, one word already mention here creates pounding of heart as it could come to life. The Same design team created FT-HS concept in 2007 which was also viewed by many as possible Supra successor.

Calty Design Research President Kevin Hunter openly stated that concept in question is opening a new chapter in Toyota’s design direction. And it did. And everything is thanks to CEO Akio Toyoda which has to slam the fist on the table at the board of directors and despite opposition, demand more than just reliability. It envisioned new path in which Toyota’s cars are breaking styling boundaries and inspiring imagination and FT-1 was one of the first representatives of their new route.

Well, look at it. Akio requested “Waku Doki,” which stands for the pounding of the heart due to the excitement, and FT-1 delivered. It looks as Batmobile from the front and Ferrari F12 from the rear. The nice combination you have to agree. The car is overly aggressive, yet it encompasses fluidic lines. At higher speeds, this car deploys its big wing, almost huge enough to rival Viper ACR’s one. And if you remember iconic windshield from Toyota 200 GT model, you will find it here too, with hardly visible and distanced A-pillars, which creates astonishing floating roof sensation.

The cabin is purely racing oriented and styling supplements that. Formula 1 inspirations caused absence of many things in front of the driver, and there is nothing to distract you from what sports car should do.

WHY ARE WE REMINDED OF IT?

This one has an easy answer. Toyota FT1 concept was one the first parts of new Toyota’s thinking, and it was a display of its capabilities. Amazing looks certainly goes in here as one of the reasons. And it could be possibly new Supra. Although it is two years old, we can bet that nobody would mind if it materializes tomorrow into Supra without changing even one line. This is how good it is.