Flying cars are probably one of the most anticipated forms of transportation in history. While we also eagerly await Star Trek transporters, we have to acknowledge the fact that they may still be some time in the future. Flying cars, on the other hand, are already here. As with all new and revolutionary inventions, the existing models cost an arm and a leg and not everyone can afford them, but as new models appear, the price will go down, allowing even us mere mortals to maybe one day buy one and drive like The Jetsons.

AeroMobil 4.0 has the potential of being one of the first flying cars in the world. It can switch modes by folding or unfolding a pair of wings along the roofline and serve as either a car or a small aircraft. As an aircraft, AeroMobil should have a range of some 450 miles, which is more than enough for most users. The whole thing is powered by a turbocharged four-cylinder boxer engine that churns out 300 bhp. The latest version, dubbed AeroMobil 5.0, will have an electric powertrain and Vertical Take-Off and Landing (VTOL) capabilities, making it ideal for urban surroundings.

With a range of 400 miles and a top speed of 100 mph, Terrafugia Transition is marketed as the “first practical flying car”. The design is a bit dated, looking like something that came from the 1980s, but that doesn’t affect the capabilities. With foldable wings, Transition can fit in a single car garage when in the road mode. Once wings unfold and the tail stretches out, you get a fully-fledged small sports plane. The company has announced that the next upgrade will include software allowing autonomous flight, including terrain avoidance. In theory that would mean that you can call it to come to pick you up, which would be awesome. 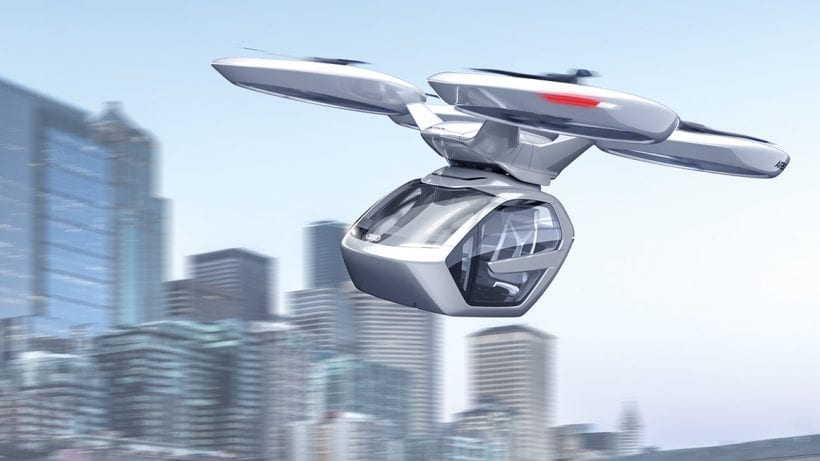 Airbus, Audi, and Italdesign joined forces to create Pop. Up, an interesting concept consisting of three main elements: the capsule, quadcopter, and ground module. Each has its own battery pack and autonomy that allows it to return to the charging station once the batteries are depleted. Its main goal is to be used in a heavy urban environment, relieving traffic congestion. It can either drive you or fly you to your destination, depending on the best available route. Pop. Up is still in the prototype phase and there are plenty of kinks to be worked out by the designers, but it has a lot of potentials.

Another model from Terrafugia, TF-X is a hybrid Vertical Take-Off and Landing (VTOL) vehicle. As such, it resembles a traditional car, unlike its predecessor Transition. Wings are foldable, but they retract into specially designed compartments, making them invisible in road mode. It has a dual powertrain, a 600 hp electric motor and a 300 hp IC engine that acts as a generator and provides power for the rear thrust propeller. It should have an estimated range of 500 miles, which is excellent. TF-X has several safety features, like auto landing system and emergency parachute able to safely return it to the ground in case of a malfunction in the air.

One of the first things people did when cars were invented was to race them. Flying cars follow the same pattern and even though the technology is still in its infancy, we already have the first racing model. Matt Pearson, the CEO of Alauda, decided that the world needs to see flying car races and so he created Airspeeder. It is basically a quadcopter capable of max airspeed of 125 miles per hour. The project is still in the development phase, but the first demo race should be held by the end of 2019, while the inaugural airborne grand Prix is planned for 2020. 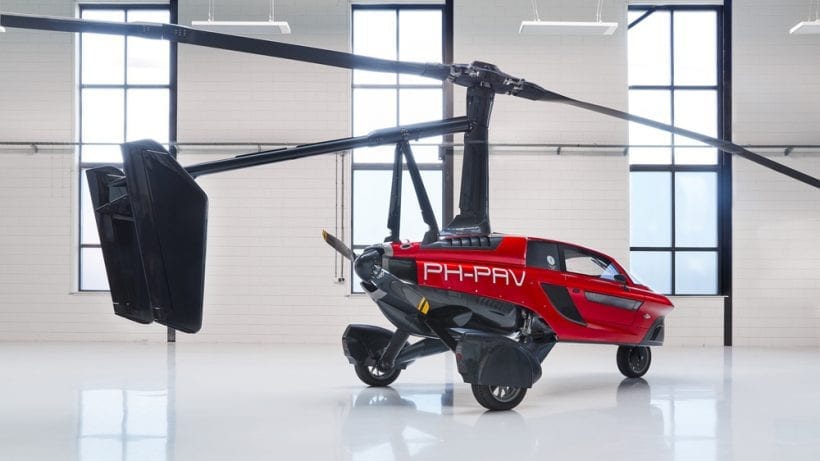 PAL-V Flying Car is a single seater gyrocopter with foldable rotor and tail that can transform into a three-wheeled road vehicle at the push of a button. It has a range of 250 to 300 miles. The development started in 1999 and now the PAL-V is commercially available, but don’t expect it to be cheap. The base model costs $399,000, while fully loaded Pioneer model will set you back $599,000.