Home
Muscle
Top 10 Muscle Car Which Actually You Can Afford 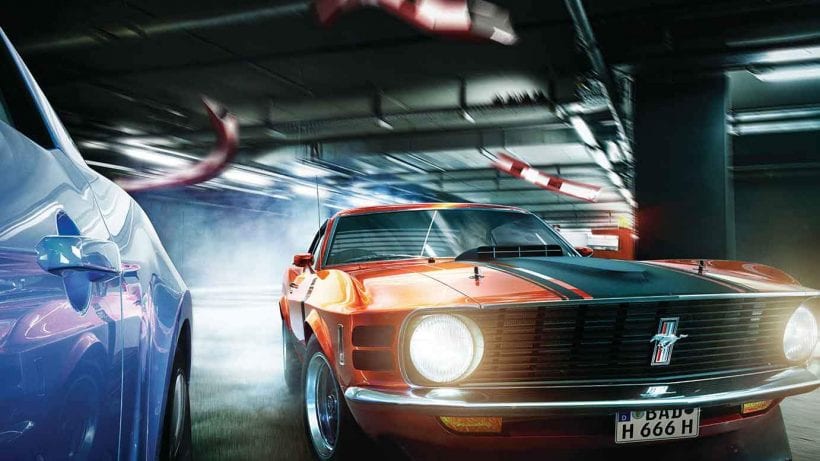 Cars are a passion for a lot of people around the world and the rich ones are separating large amounts of money to own the latest cool machines that are quite expensive. On the other hand, there are car lovers that do not have much money, and they would like to feel as cool as those with the latest machines. If you are one of them, do not worry, we have a solution that does not involve robbing a bank. The situation is quite the opposite because all cars are fairly affordable and we guarantee that you will look very cool while cruising down the street. We have prepared the next article in which we presented you with the top 10 muscle cars that you can actually afford. Well, if you’re ready, let’s start. 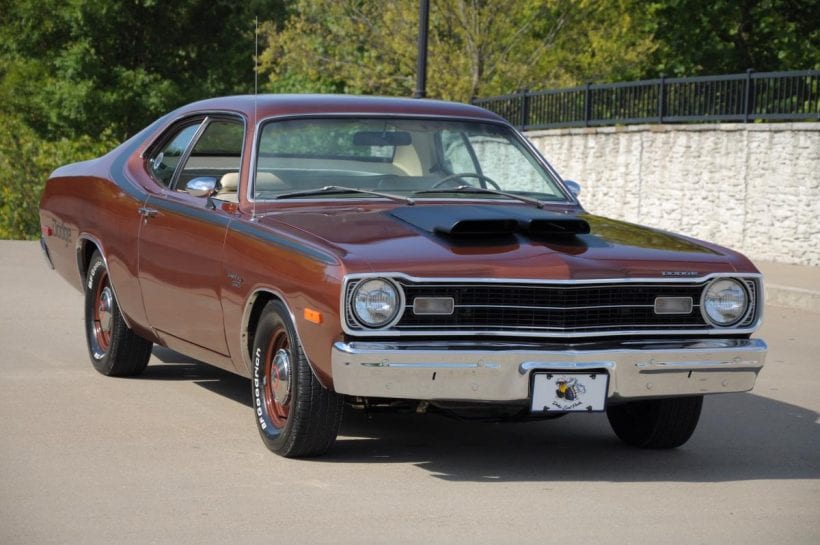 The Dodge Dart is one of the cars you would surely like to have because it is definitely one of the classic American muscle cars. On our list, it got a place first of all because it is pretty easy to get one like this in good condition. However, if you want to rearrange it to your wishes and add some accessories, it will probably be cheaper to pay. Also, if you can’t find a vehicle that is in good condition, it’s not a problem to restore one that is not so good.

As far as its drivetrain is concerned, the Dodge Dart is powered by a V8 that exists in two versions with 225 cu. and 273 cu. What is its price? Well, Dodge Dart is currently available for less than $10,000, but if you want a fully-restored car then the price will be around $15,000. All in all, by purchasing this muscle car you will not make a mistake and you will get a very cool machine. 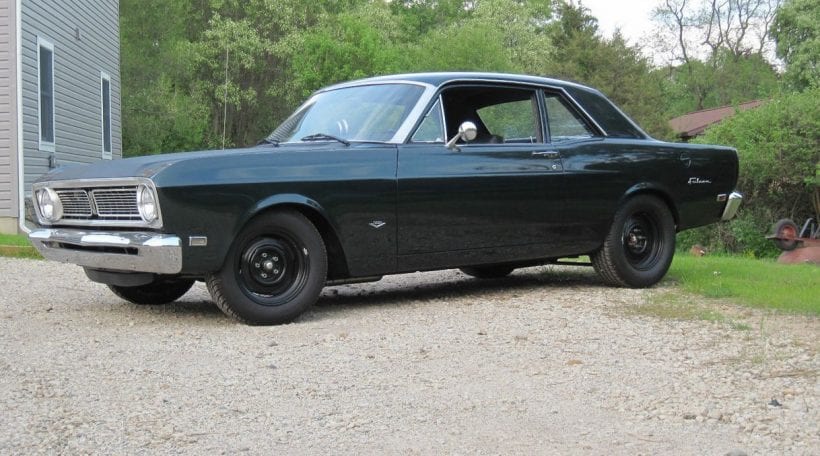 Ford Falcon came for a similar reason on our list as Dodge Dart. Falcon is a machine that you can easily find and you can easily repair by yourself or restore it in the way you want to. Falcon was the name for various types of vehicles that were produced in the period from 1961 to 1970, which is the main reason for the wide distribution of this car. For example, you can find a coupe, sedan or convertible variant, but there is also a van that was produced in the same period.

As for the price of Ford’s machines, it is currently possible to find it for about $15,000, but there are some cars that we managed to find for as low as $6,000 so Falcon is definitely a muscle car worth every dollar invested. 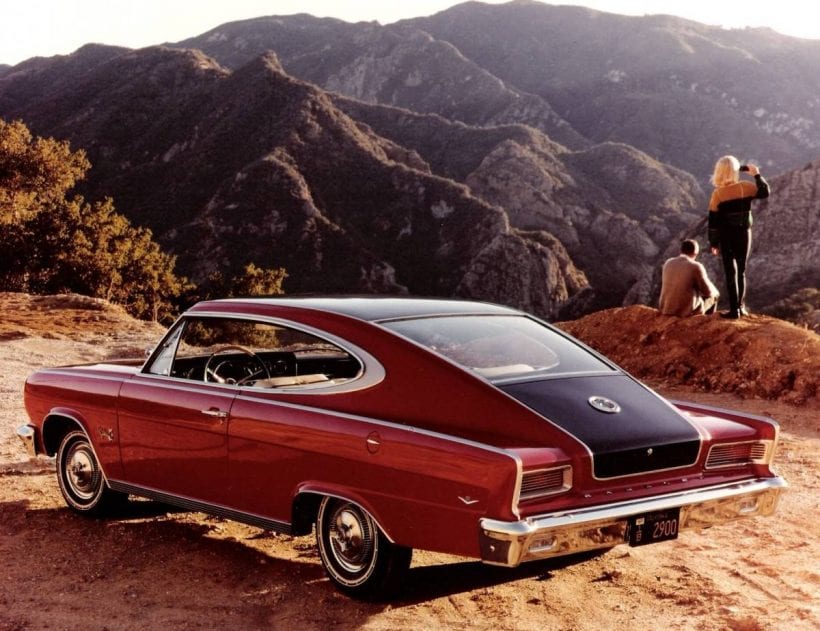 The AMC is an American manufacturer that had several, let’s say, weird cars that came out of their factory, and one of them is definitely Gremlin. However, when we talk about Marlin, we can say that it is a two-door muscle car that was produced in a limited series only two years from 1965 to 1967. Also, we must say that the original name of this machine was Rambler Marlin.

As for his drivetrain, AMC Marlin is produced in two variants, with 287 cu. and 327 cu. in V8. When it comes to price, Marlin is definitely one of the more affordable vehicles with a price of around $16,000. This, of course, applies to a fully restored car. 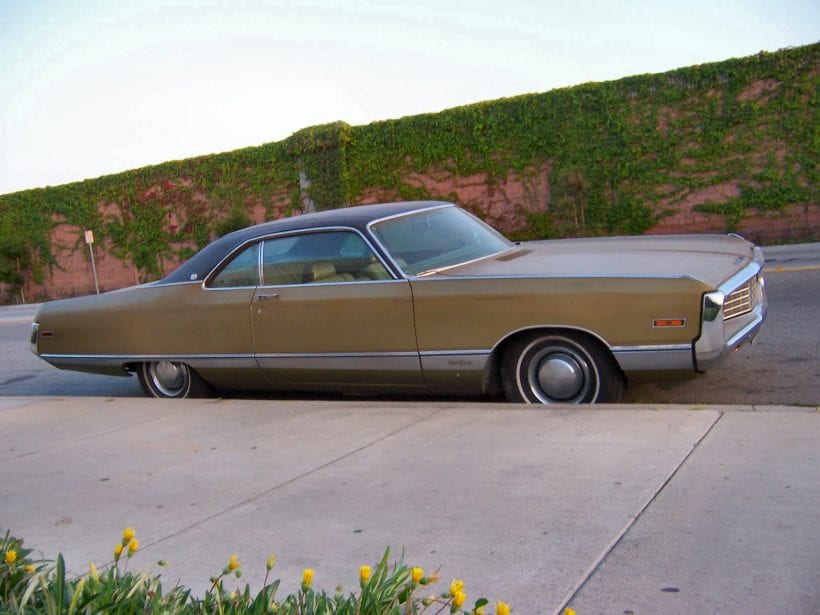 Believe you or not, Chrysler New Yorker is a car whose production has a tradition of over half a century. However, in spite of its long history, it was never very popular. The American car manufacturer has produced two versions of the New Yorker, a luxury sedan and of course a muscle car we are writing about. But it was not even helpful to raise the popularity of the New Yorker.

However, this reduced consumer interest has affected its price, which is now very affordable and amounts to around $10,000, but it can be found at a lower price. This price is approximate for both versions, with two and four doors. 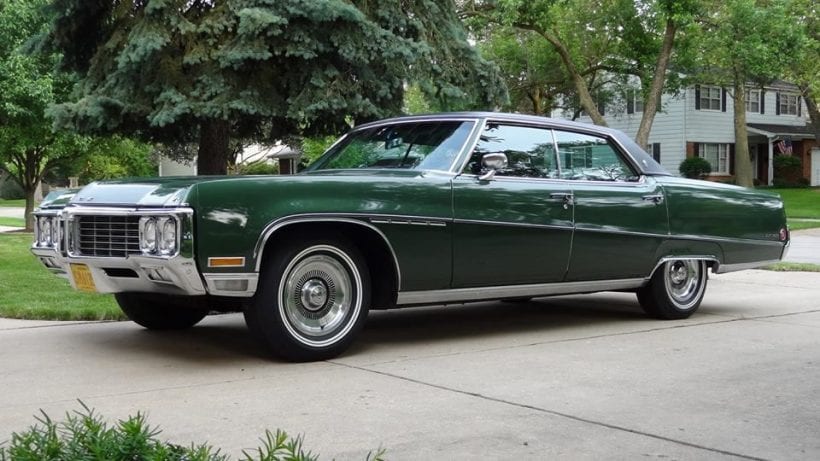 Buick Electra is an American muscle car that is slightly forgotten and ignored by fans of classic muscle cars. Fortunately, we are here to remind you all of this very cool cruiser. Its production took place over a period of five years, from 1965 to 1970, and at that time, it was powered with two versions of engines, 455 cu. as well as 401 cu. in V8.

This machine could be one of the solutions for you because if you decide on purchasing, you can find Buick Electra at a fairly low price of $10,000 or even lower. Also, we must note that if you want to find a unit that you can restore, then the price is even lower and goes low to $5,000. 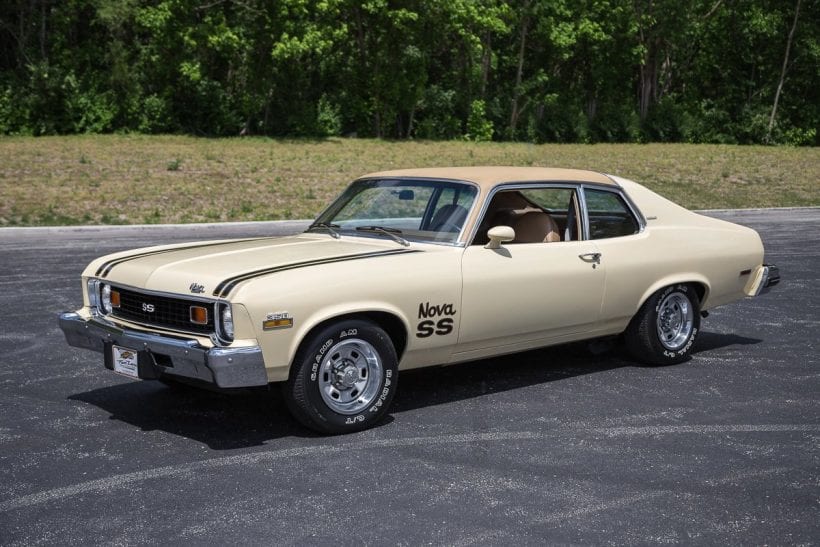 Frankly, no list of muscle cars can be without at least one model produced by Chevrolet. We decided to introduce you a model called Nova that was and still is a very popular choice for many lovers of classic muscle cars. That means it’s not hard to get one like this these days.

The original versions of the Nova machine were quite opposite to what we call the American muscle car. It was available with two versions of the engine, with a 4-cylinder 2.5-liter and an inline-6 3.2-liter power unit. However, later versions were powered with 283 cu. in as well as 327 cu. in V8. Due to its great popularity, the price of Nova is in the range of $20,000 for models that you can restore and adjust to your wishes, up to incredible $60,000 if you can afford some special editions. All in all, Chevrolet Nova is definitely a car that undoubtedly belongs to a muscle car whose value and popularity is still high. 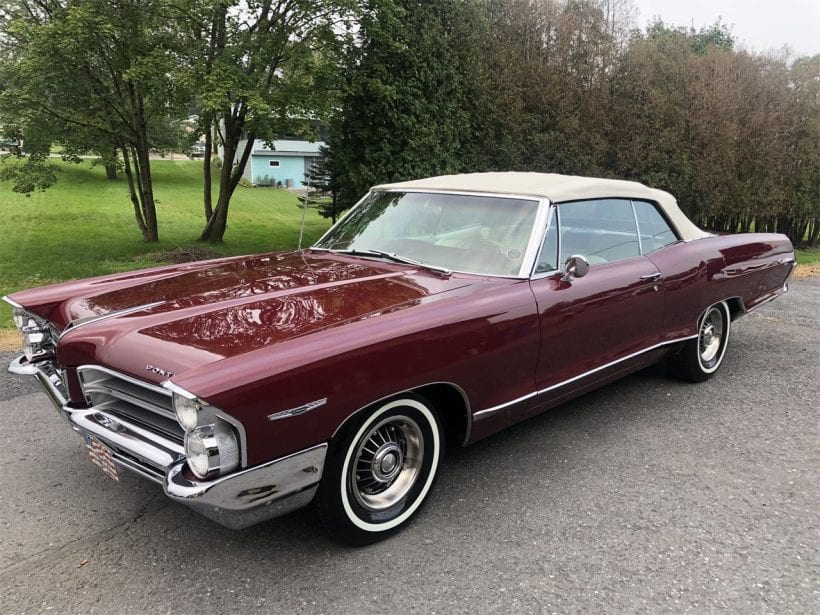 If we talk about the most beautiful classic muscle cars, Pontiac Catalina definitely belongs to them. We can say that by purchasing this one, you get beauty and muscles in one machine. As for the drivetrain, the Pontiac Catalina is produced with two versions of the engines, 400 cu and 428 cu. in a V8 engine that was less present on the market in that period.

As far as the price of this beauty is concerned, it is fairly affordable and for just $12,000 or even less, you can get an excellent car. Certainly, Catalina is a vehicle that can significantly contribute to your cool look. 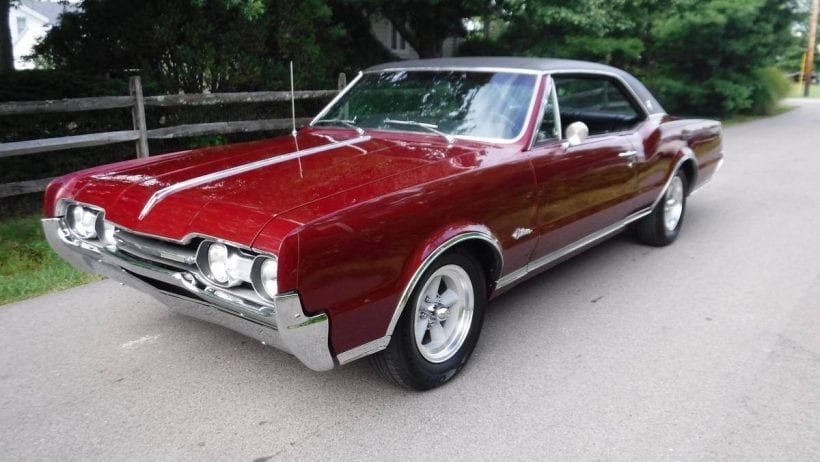 As well as some of the previous cars on our list, we believe that Oldsmobile Cutlass has not received enough attention from the car lovers. First and foremost, we must emphasize the fact that spare parts for this machine can be easily purchased, but in addition, Cutlass has not been subject to restoration many times.

In the period from 1968 to 1972, several different versions have been produced, such as the Cutlass 4-4-2 or Cutlass Supreme, which tells us that it is not too difficult to obtain such a muscle car. If you want to increase the number of restored Oldsmobile Cutlass, then you will have to pay around $5,000. In case you want to restore a machine, the price is twice as high, that’s $10,000. 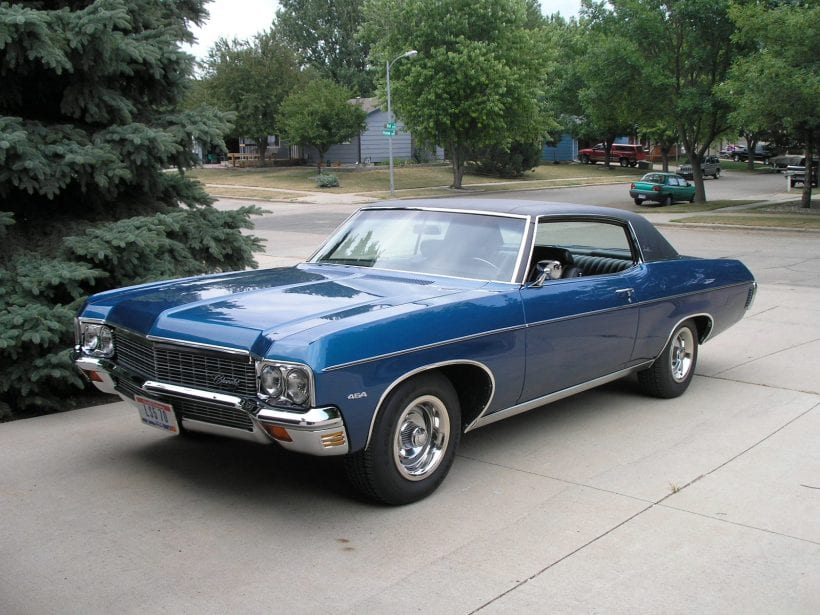 As we have said before, it is impossible not to add a few legendary models manufactured by Chevrolet when making a list of excellent muscle cars. One such iconic model is exactly Impala, which became a classic machine right after the start of production. However, this is absolutely logical when it is superbly designed and we believe there is no real car enthusiast who does not admire this vehicle.

In a way, the Chevrolet Impala has become a symbol of a period in the history of the automotive industry. As for the engines, Impala is powered by 230 cu. and inline-6 but there is a more muscular version with 427 V8 engine. Due to the great popularity of this model, the price has dropped in time, so it is now possible to find a machine that you will need to restore for only $10,000. If you do not want to do this, the restored unit will cost you $21,000. 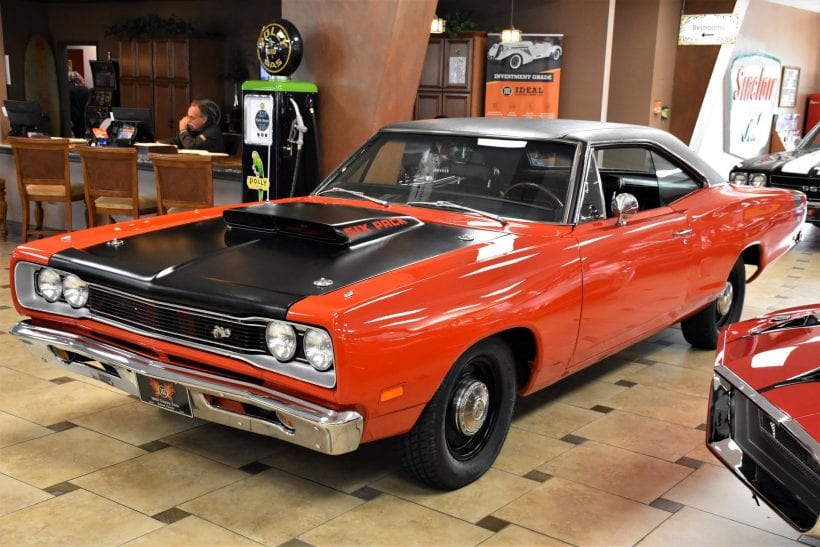 We started our list with the Dodge Dart, and we’re finishing it with the Dodge Coronet. Unfortunately, the Dodge Charger and Challenger models were always more popular than the Coronet, and in some ways, it was in their shadow, so that the production of this great car finally ended in the year 1976.

If you think that the Dodge Coronet is ideal for you, you will have to pay $20,000 even for a non-restored version. However, parts can be found and purchased, so this one can often be found in workshops of restaurateurs and lovers of muscle cars.