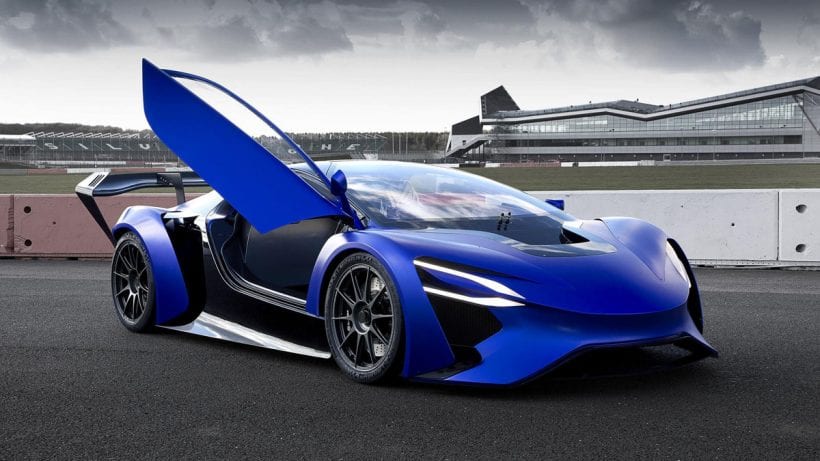 The Consumer Electronics Show (CES) is an amazing event that absorbs all of the usual craziness and extravagance of the Las Vegas Strip. However, what it also does is give us a stunning glimpse into the future of transportation through dozens of futuristic concept vehicles. At this year’s show, there were many self-driving cars, mixed reality experiences, and some real-life Transformers even. Basically at CES, there is something for every kind of transportation future-tech fan. That includes cars, motorcycles, and other vehicles, like scooters and skateboards. Both their interiors and exteriors are unreal, and you really have to see it in order to believe. They even had a flying drone helicopter taxi and, as well as a smart yacht. Read to learn something more about the future of transportation! 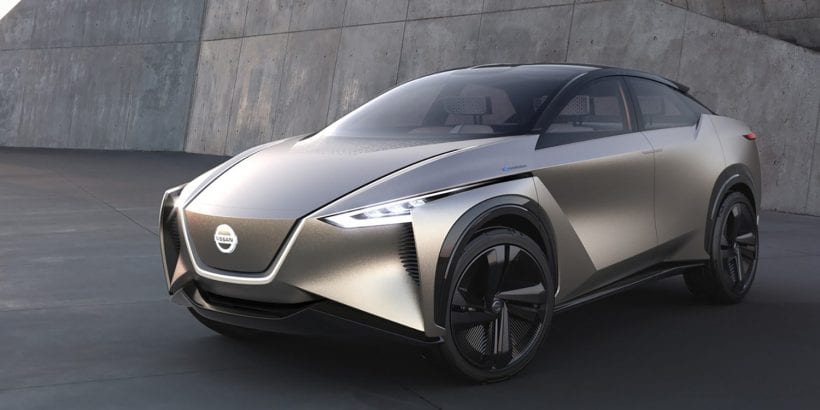 The IMx Kuro concept vehicle by the famous Japanese brand Nissan is a fully autonomous electric crossover vehicle that produces zero emissions. It will probably enter production sometime in 2020. It sports a simplified exterior and a spacious interior that stunned the crowds at the CES show floor. One of the best things about it is the panoramic OLED display present at the dashboard. In addition to this, a separate wood grain-patterned display wraps around the interior door trims. It is there to bring some extra sense of zen while you cruise the roads. 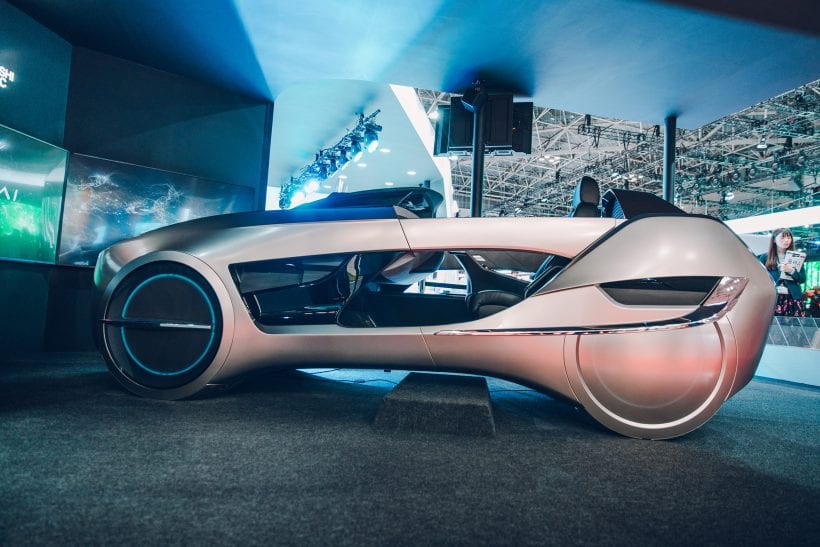 Another Japanese heavyweight, Mitsubishi, showed off the latest version model from their line. It is the newest Emirai 4 version of the smart mobility concept, which has been brought to the CES with a set of flashy new upgrades every year in recent memory. The heads-up augmented reality display has 3D mapping, while a half mirror sports a diagonal LCD panel. This gives the driver 3D images of the whole environment around him. A fully autonomous mode is present as well, as are plenty of interior hi-tech toys and features. These include the haptic feedback control, a mobile device payment integration, and biometric authentication. 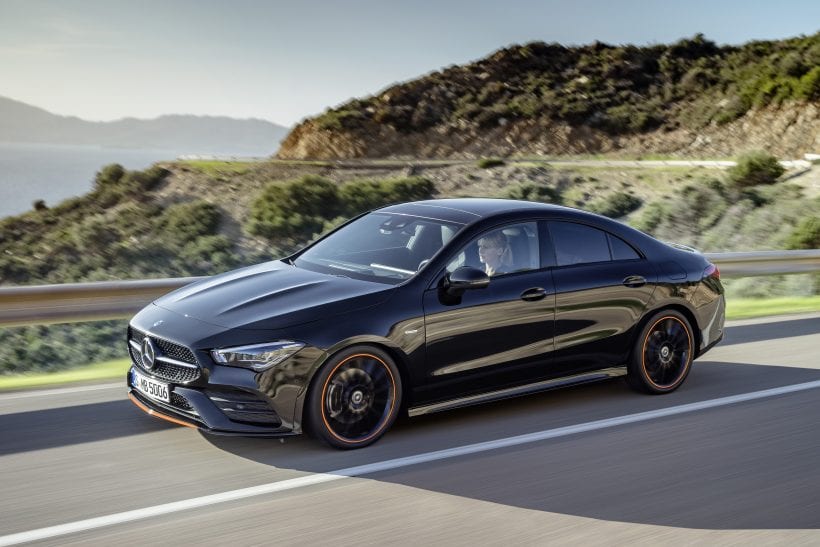 The German automaker giant had the highest-profile vehicle reveal among cars you can actually buy. The debut of their 2020 Mercedes-Benz CLA was long-awaited, and it hardly disappointed anyone. The second-generation sports coupe practically has every digital feature you might need, while the in-car improvements and the first semi-autonomous driving system paired with a hands-free mode are there too. The brand also introduces the new MBUX voice control system. For the fans of wearable tech, the car can synchronize with the freshly announced Mercedes Garmin Vívoactive 3 smartwatch. The 2020 Mercedes-Benz CLA goes on sale later this year, and everyone is eagerly anticipating the price reveal.

Despite the new 2020 CLA, Mercedes also revealed its own futuristic concept vehicle, called the Vision Urbanetic. This is an autonomous driving platform that has switchable bodies. Thanks to the Tron inspired exterior, it can be fitted with a passenger module that offers room for a total of 20 people, think of it as a sort of ride-share taxi. What is more, it can hold a cargo module for transporting freight goods and packaged deliveries. The base of this futuristic utility vehicle does autonomous driving and houses electric batteries, motors, and the propulsion system. To put it simply, this is a very adjustable minibus for people or cargo, using a crazy self-driving body. Amazing. 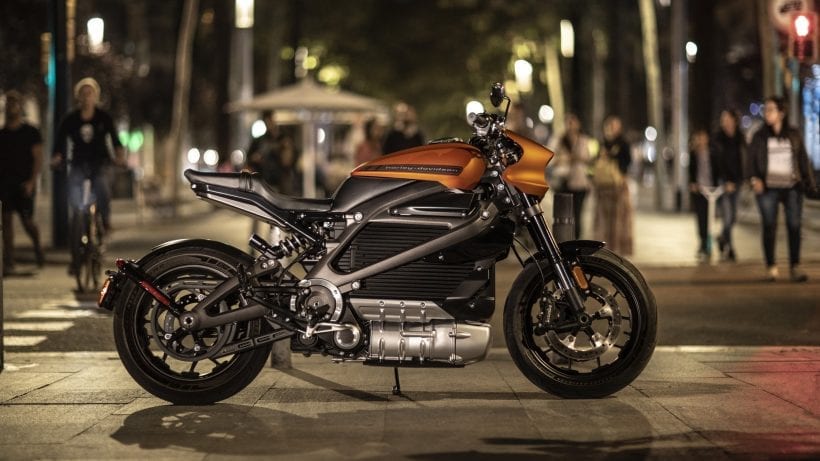 The legendary maker of the American muscle motorcycles is finally ready to step into the future. They proved this by releasing the first-ever electric motorcycle in their long history. The Harley-Davidson LiveWire is a product built through a close partnership with Panasonic Automotive. It has GPS and LTE connectivity with 4G LTE speeds, and a cool 4.3-inch liquid crystal touch-screen display serving as the dashboard. It even offers integrated navigation and music options! The bike itself looks amazing and sports a muscular lightweight body. On the performance end, it goes from zero to 60 mph in less than 3.5 seconds. Its high-voltage battery gives you an amazing 110 miles on a full charge. 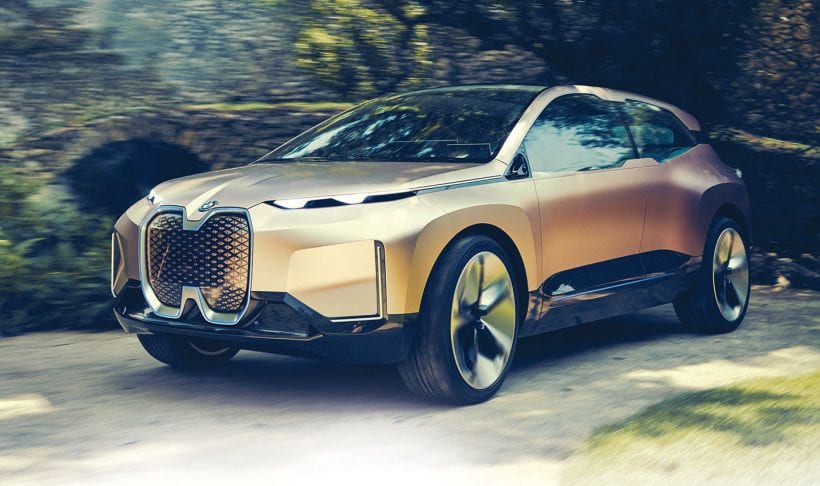 One of the most favorites reveals for the fans and critics at CES was the BMW Vision iNext, essentially a sci-fi living room put on wheels. This is a fully autonomous electric luxury vehicle that has hidden touch interfaces put inside of wooden and cloth surfaces. It also offers an intelligent voice assistant, as well as screen projection anywhere you want in this amazing, comfortable interior. The roomy carpeted back seat surrounding the smart wood coffee table is capable of responding to touch gestures, communicating you through the assistant. This is a dream come true for any sci-fi lover! 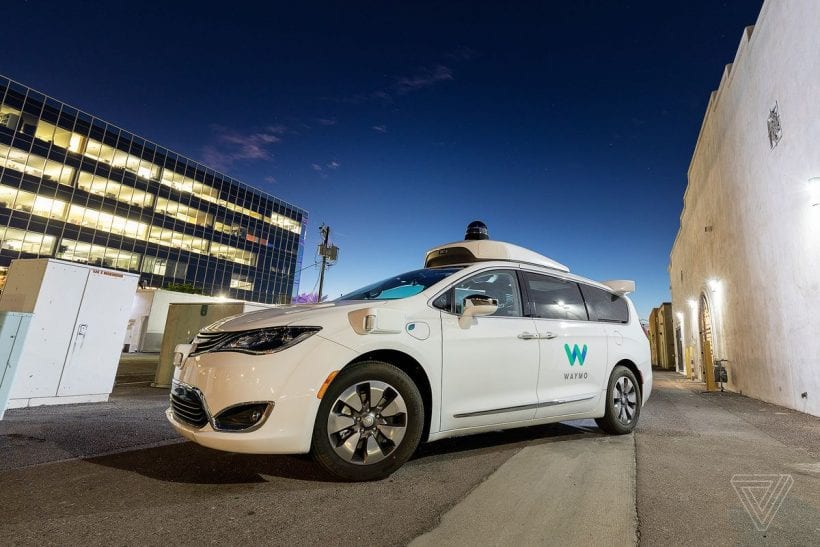 The Waymo self-driving car service by Alphabet showed off an autonomous minivan on the CES show floor, called the Waymo One. The most intriguing features include Lidar arrays and a camera on the roof. This car is made by the first commercial self-driving service, and it is now offered for testing to hundreds of early riders who decided to help and support the development. Now that is quality customer care! 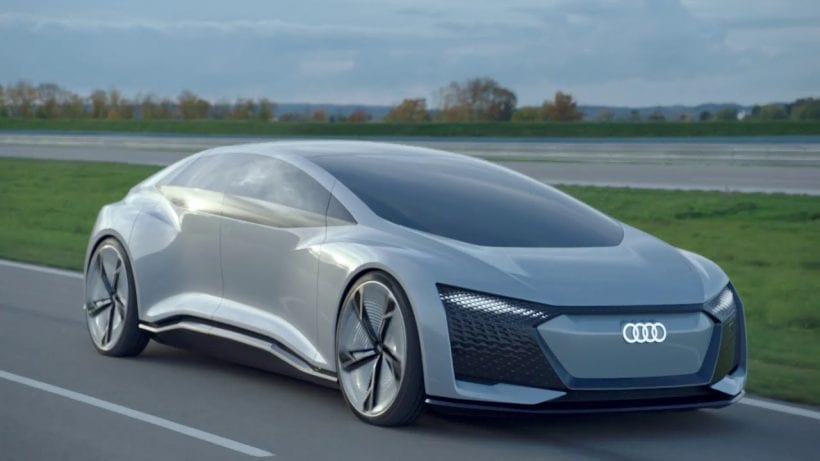 If Mercedes and BMW are there, Audi is there as well! They stepped onto the floor with a car they first unveiled in 2017, an electric autonomous vehicle that is among the sleekest during the event. Their concept car is supposed to start production during 2021, has four motors, and an unreal range of between 435 and 497 miles per one full charge! Audi also revealed it will charge to 80% in under 30 minutes, wirelessly! The interior of this bad boy gives us a glimpse into a fully self-drive future. It does not have any kind of pedals, or even a steering wheel visible. Everything it has are luxurious indoor seating and a transparent panoramic roof for maximum pleasure. 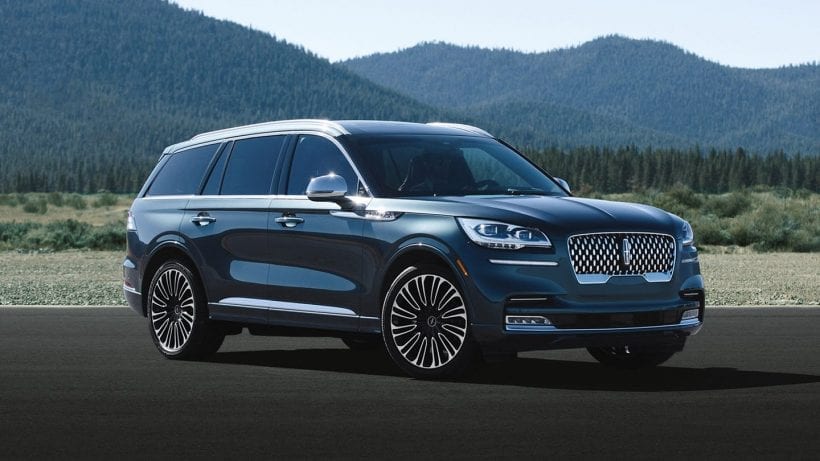 Lincoln came to the CES with its new 2020 Lincoln Aviator, which is a 450-horsepower plug-in hybrid crossover car. It runs on a 3.0-liter, twin-turbocharged V6 engine, and has tons of new hi-tech improvements and smart interface upgrades. The vehicle can be unlocked through a smartphone instead of a key fob, while important features like park assist, traffic jam assist, adaptive suspension, and Conserve and Excite drive modes offer automatic controls to the previously manual experience. We must not forget the crazy 28 speakers from the Revel Ultima 3D system. 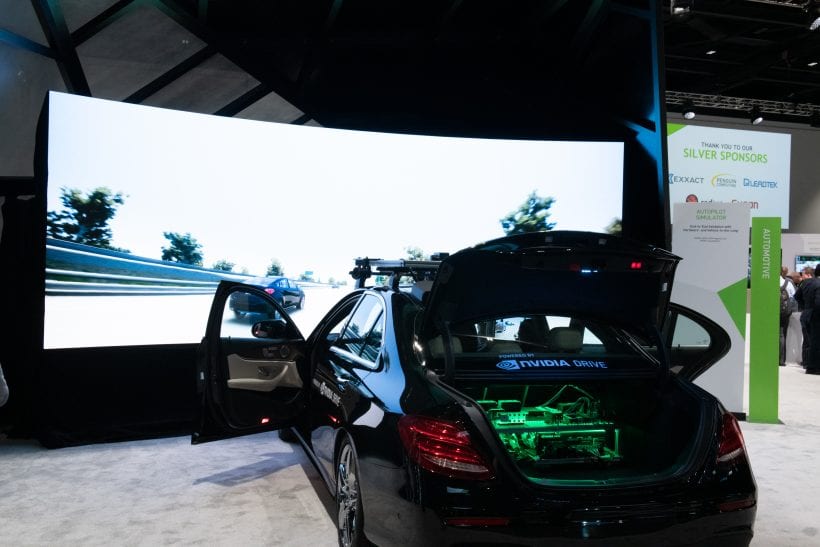 NVidia is a brand that mainly deals with the world of gaming, producing some of the best graphic cards available today. Despite this, they came to the event prepared more than usual and showed off an autonomous vehicle that uses their new Drive Autopilot system. Furthermore, their Xavier automotive-grade hardware can also be integrated throughout this cool new vehicle, including a heavy-duty computer in the trunk. This enables Level 2 autonomy, which means the driver assistance systems help you control braking, acceleration, and steering. 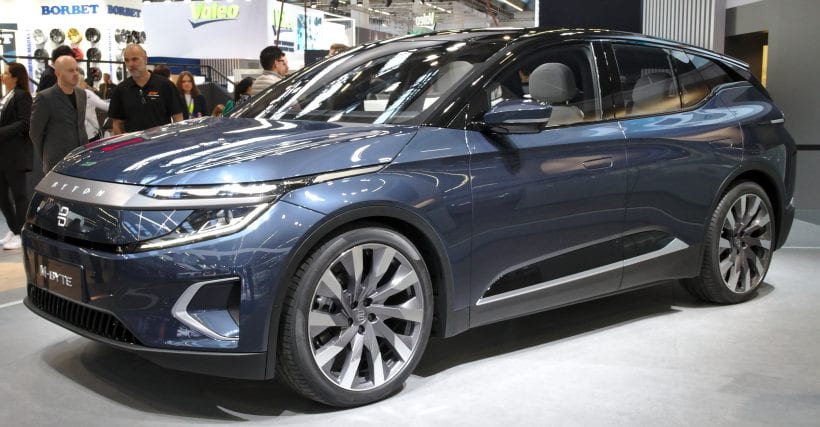 Byton is one of the biggest competitors of Tesla, and they displayed two different autonomous, electric models at CES this year. The first is the M-Byte prototype, which actually debuted last year. It is the less expensive of the two models, with a price tag of $45,000. This electric crossover will enter production later in 2019 and is set to have plenty of futuristic features. They include a 48-inch touch screen that stretches across the whole dashboard, an additional smaller touch display in the steering wheel, and plenty of cameras housed in its luxury SUV body. 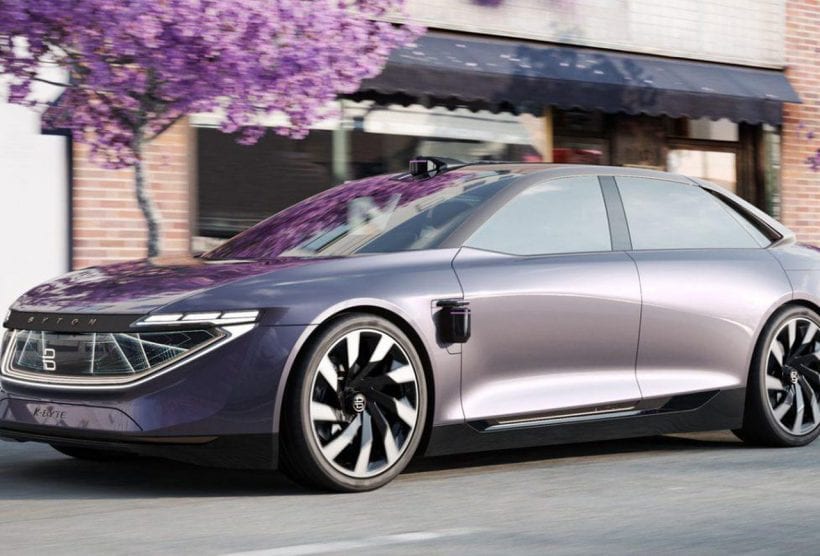 The second model by the brand is the Byton K-Byte, a premium sedan coming in 2021. It will have Level 4 autonomous driving, which means a fully autonomous driving without any human control or oversight. The K-Byte will receive similar interior features like its larger brother, as well as a digital grille in the front. In order to be different from the rest, the sides sport retractable “LiGuard” sensors, which go in when you decide to take controls. Both of the Byton is set to have the Alexa virtual assistant by Amazon, integrated within the Byton OS. 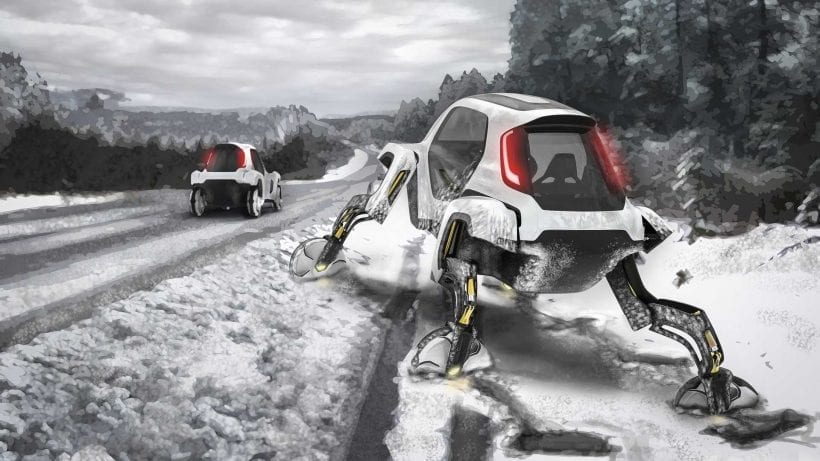 The Hyundai Elevate concept is, so far, the closest thing to a real-life Transformer. This crazy concept car will be able to walk or climb over obstacles thanks to the extendable robotic legs connected to a modular multi-use chassis. The body shrinks down into the regular driving mode when you simply want to cruise around. You can swap out different attachments from the car, and even climb a 5-foot vertical wall, or get over a 5-foot gap! While doing all of this, all of the passengers are safe inside. Hyundai Elevate is set to successfully blend electric car tech with robotics, and usher in a true futuristic age of transport. 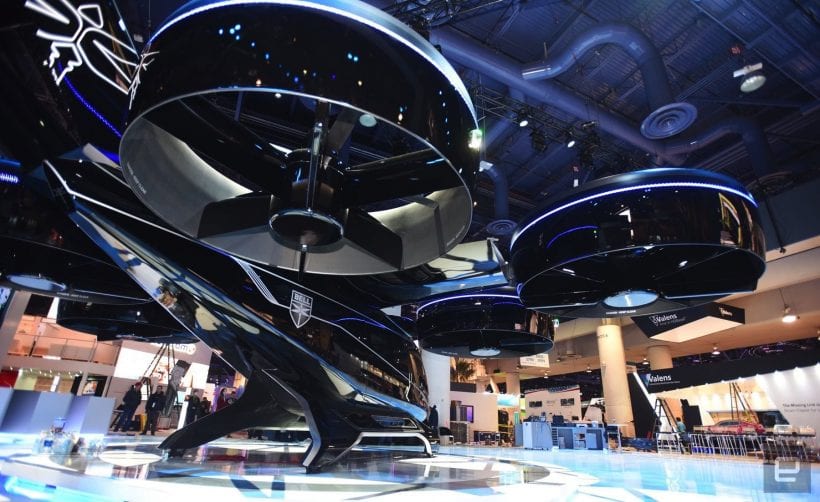 Now, here is something different. Among the most unconventional and eye-catching concepts present at the CES in Vegas this year was the Bell Nexus Air Taxi. This is a massive flying drone-helicopter hybrid, planned to be used as a rideshare service in the air. Right now, it is being tested at various locations, including Dallas, Dubai, and Los Angeles. This electric hybrid will have a range of 150 miles, but it will only be released in 2025 at the earliest. The high-tech cockpit is filled with high-resolution touch screens and control sticks, for a feeling straight out of a Star Wars or Star Trek movies. 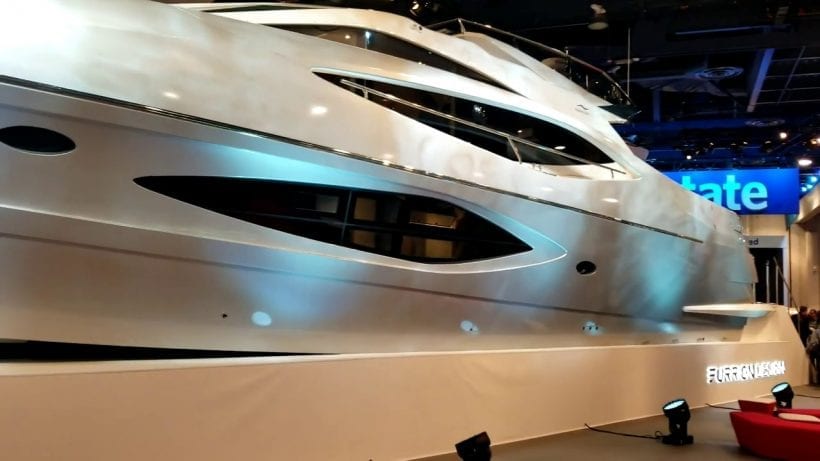 Last but not least, let us take a breather from land vehicles and talk about a vessel instead. This enormous, 78-foot Furrion Adonis yacht towered over everything else present at the CES show floor in Las Vegas. This is a high-tech luxury cruiser the manufacturer described simply as a smart yacht. It has a voice-activated intelligent Ai by the name of Angel. This AI controls electronics, entertainment, kitchen appliances, the facial-recognition camera system, and much, much more. Simply say “Hi, Angel”, and it is at your service. You can order food from the kitchen, control the music, get updates on news and weather, and even shop! The yacht is full of smart interactive mirror displays everywhere, while the cabins have Furrion Sense TVs with soundbars. On top of the deck, there is a drone and a drone port. This was, by far, the craziest and the most expensive thing present at the show this year.