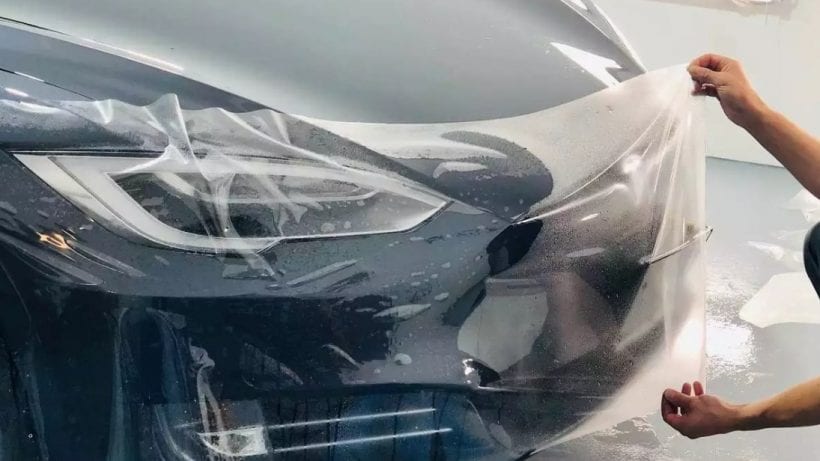 The history of protecting the paint of an automobile goes all the way back to when the first automobiles rolled out of the factories well over a hundred years ago. Long before the internal combustion engine was tweaked well enough to be put into automobiles, humans had already figured out how to properly paint metal with a lasting coat. However, what they did not anticipate were the flying rocks and dirt and other debris that came with driving, and the potential to bump into so much stuff, ruining the paint. So, over the years, people have been busy devising new ways to protect the paint put onto cars in the factories or for aftermarket paint jobs. 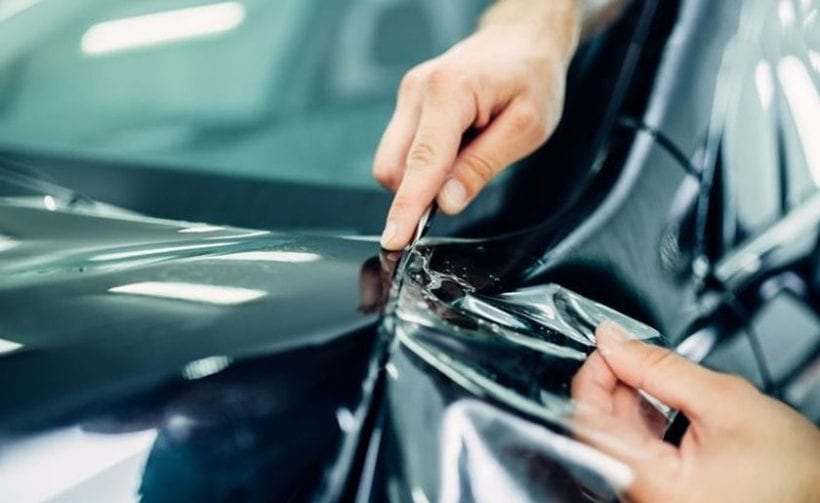 Enter paint protection film, also called clear paint film, PPF, or a “clear bra.” This is a very strong and durable yet incredibly thin layer of thermoplastic urethane that coats the car’s paint and provides ample protection against the weather and small debris and light contact. In other words, with a coat of clear film on the car, the paint is protected a lot better without actually being noticeable on the car. Though this stuff seems pretty common today, it took a very long time and many different advancements to reach this point. You can visit this website here at: calgarypaintprotectionfilm.ca for more information after the article or you can visit it to get your own paint protection film today.

There is no clear, clean A-to-B line when telling the history of a clear film coat to protect an automobile. The waters are very muddy, and the steps taken were very small. In fact, no one thing gave us the clear bra; rather, it’s an amalgam of different advancements that stretch well back over a century. So, while we might take the end result today for granted when we take our cars in for a clear coat, you might be interested to know the long journey chemistry took to bring us to this point.

The Humble and Amazing Beginnings of Thermoplastics

The first step in our journey to reach today’s paint protection film occurred in 1908 when Jacques E. Brandenberger invented the first practical thermoplastic variety called cellophane. Known primarily for being that thin, clear plastic coating over packs of cigarettes and certain snacks, cellophane is actually very durable per its size and function. It can be used for a whole lot of applications. This was the first-time scientists used chemistry to develop such a material, and thus the birth of thermoplastics.

The next stop along the long line was Bakelite, considered the first true plastic. Scientifically speaking, its name was Phenol-Formaldehyde, and Leo Hendrix Baekland used what Brandenberger had created to move this process further along. Then, in 1926, vinyl and PVC were created by Walter Semon. Strong, durable, and able to be cast to any thickness or shape; these materials are still incredibly popular today, nearly a century later.

In 1933, Ralph Wiley created Polyvinylidene chloride by accident during an experiment. This PVDC took plastics to an entirely new level, which paved the way for creating polyamide in 1964. All of these different steps were taken many years in the past to bring us the clear bra material we know of today. It’s because of discovering, exploring and tinkering with the physical properties of chemicals that we could create these sorts of plastic materials. These materials are so thin and light that we can now apply them to an automobile’s surface through spraying, the same way a coat of paint is applied.

How Things Started for the Automobile 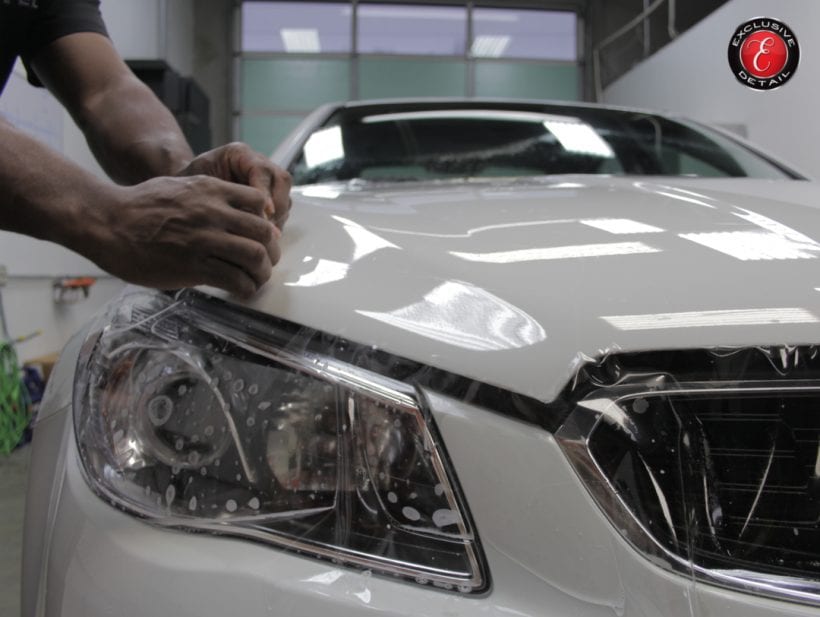 The origins of protective paint film for automobiles specifically began in the military. During the Vietnam War, it became very evident that enemy fire was not the only thing putting helicopters in danger. After a helicopter would return from a successful mission and undergo maintenance, it was noticed that the rotor blades were in horrible shape. So it was then concluded that all the debris and flying shrapnel to hit these blades caused them to fail, even if the helicopter’s main body showed no signs of such damage. Figuring out how to prevent this sort of damage from happening, the military went to 3M and asked them to provide a solution that would be unnoticeable both to sight and flight. The military wanted something so thin and light that it would not affect the physics of flight, and so 3M came up with a protective film, using all of the chemistry processes discussed earlier.

3M coated the blades in a clear plastic material that was no thicker than a coat of paint, yet had the plastic’s protective power. They devised a replaceable film that could be peeled off and replaced any time the military needed to do so, and they made it a very simple process that any mechanic could follow when performing routine maintenance. At that time, due to its overwhelming success in protecting helicopter blades, the clear protective film we know today was dubbed “Helicopter tape” by the military. 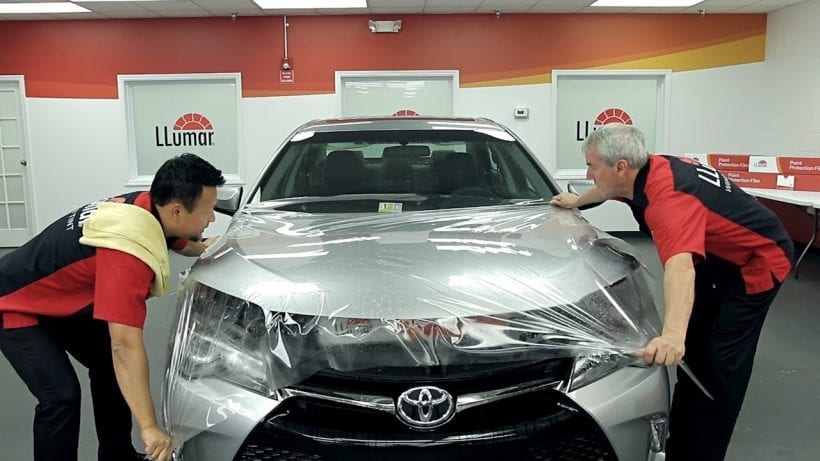 While the military might still use this “Helicopter tape,” it was also quickly adopted by the automotive industry to use with automobiles. After all, if it’s tough enough for blades that spin incredibly fast in a legitimate war zone, then it will certainly work for automobiles on the roads. So, the paint protection film, called PPF at that point, was adopted by automobile manufacturers. The PPF was tweaked, which made it even thinner and more flexible, but still incredibly strong. Many automotive companies started using this stuff at their factories. It eventually became available so widely that aftermarket shops started to adopt and offer this protection to anyone seeking a new paint job.

The chemistry hasn’t changed that much since the Vietnam era when it became popular with helicopters. Today’s PPF is merely thinner and able to be more easily applied to any automobile. Most cars drive off the lot with a coat of this stuff already on, as it’s known colloquially as just “clear coat,” but anyone having their car repaired or repainted should never forget to get a new application of this protective film.