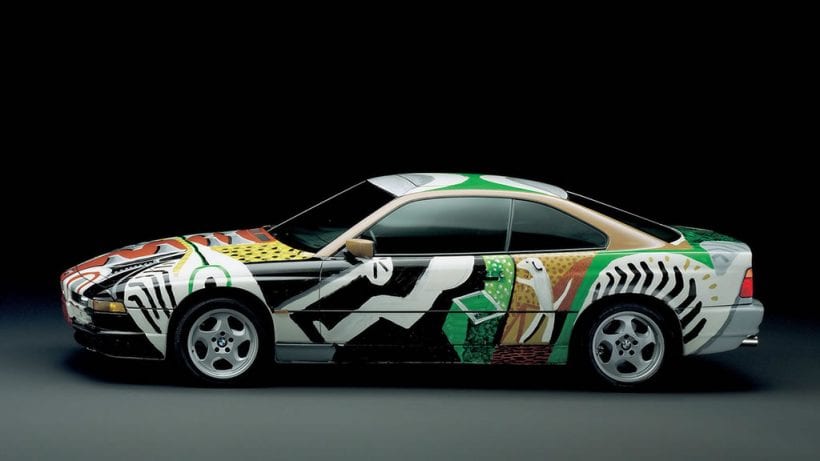 Design in the automotive industry involves many things, and it starts from the creation of a concept or an idea, after which it moves to the actual development of road vehicles. Art cars are much more unique than regular models, and their creators are often the ones driving them. In most of the cases, the appearance is influenced and modified through the very personal expression of the artists. This then adds an extra layer of uniqueness to the vehicle, and art car culture takes great pride in this. Since the dawn of car customizations, the idea of art and cars has been constantly developed. The start of it all can be most credited to the hippie-themed VW cars of the 1960’s. Following seven cars are some of the most beautiful artistic cars out there. Enjoy!

We will start with the most modern and recent example among the bunch. This is a 2015 Lexus RC-F, commissioned for the New York Fashion Week and created by Shantell Martin. The technique used makes it look like the car has been drawn on by a black marker. It also features various simple faces, as well as interesting inspirational quotes. The sharpie style art is a really strong contrast to the shape of the car, and the whole thing seems like the car has been vandalized, but only at a first glance. This design makes this RC-F specimen a true one-of-a-kind vehicle and highlights the much-growing interest of manufacturers in art cars. Interestingly, Lexus now has different annual installments, something like BMW has been doing for years. 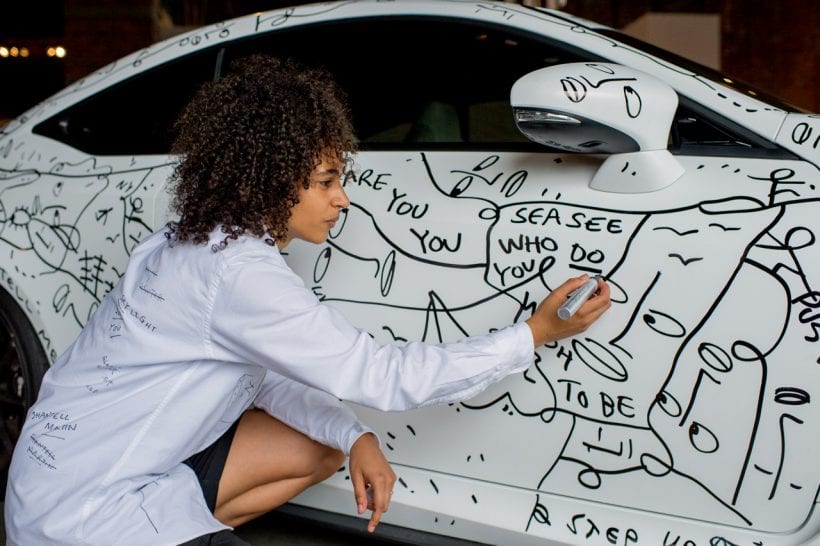 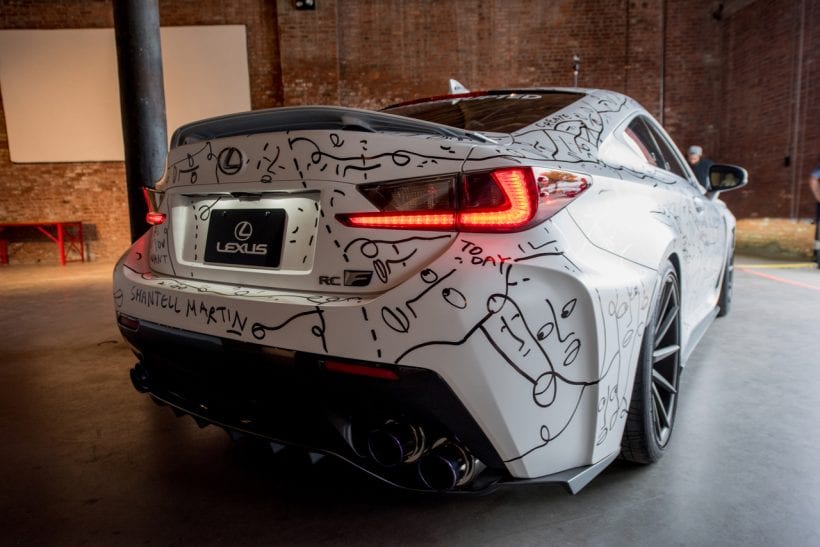 Larry Fuente, an artist from California, converted his own 1960 Cadillac into the ‘Mad Cad.’ The car started as the iconic and classic Cadillac De Ville. However, Mr. Fuente spent four years on his artistic piece, covering the car in various beads, jewels, female mannequins, and plastic flamingos. This car is perhaps the most peculiar on this list, and the huge dimensions along with the overhanging sculptures make give you a lot to look at for sure. The designer used over a million jewels, beads, and baubles for his car, which was so well received that it actually helped to develop the Cartist scene, while Fuente was nicknamed by the New York Times ‘the Da Vinci of the art car movement’. 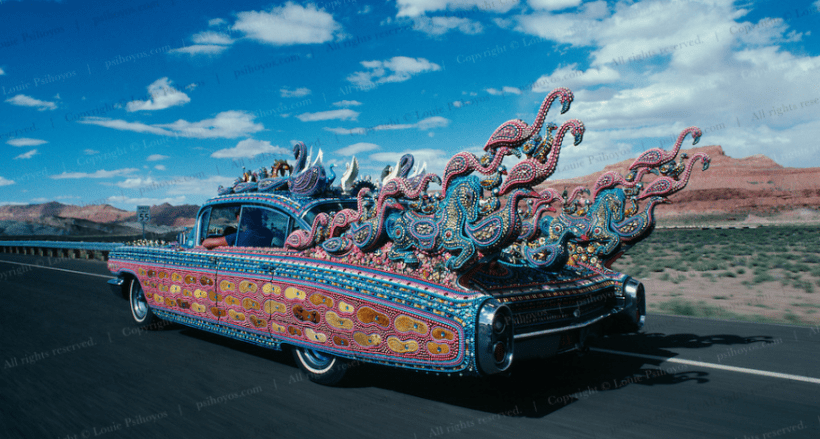 The 15th art car installment by BMW saw the return to racing cars as the base for the project, which is pretty significant because art cars should be seen while moving. Simplicity is what makes this design so unique, however. Holzer, the designer, used statements printed in reflective letters in order to create his vision. Unlike other on the list, the car does not have graphic illustrations or striking colors. Instead, there is only a white base and reflective lettering. The beautiful sports car was even allowed onto the Le Mans circuit for an international debut. Holzer revealed that she was inspired by the fearlessness of racecar drivers. 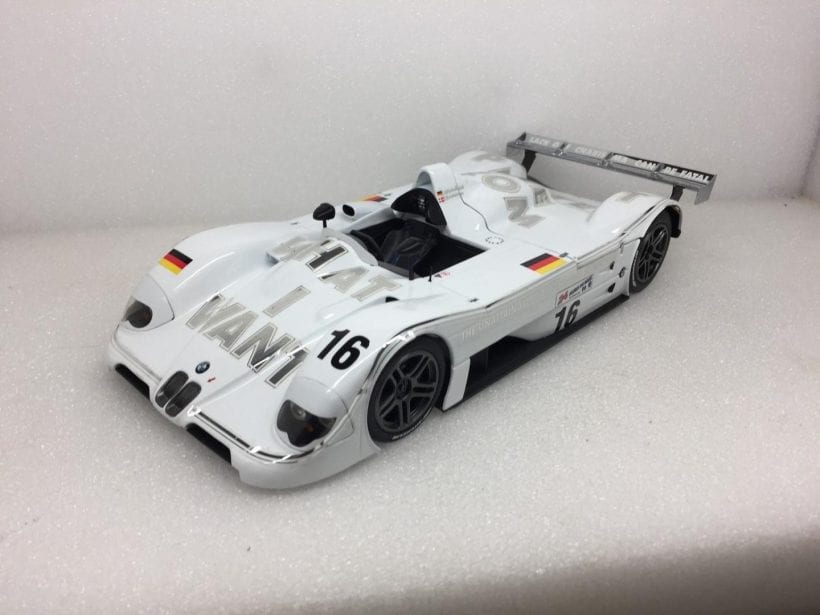 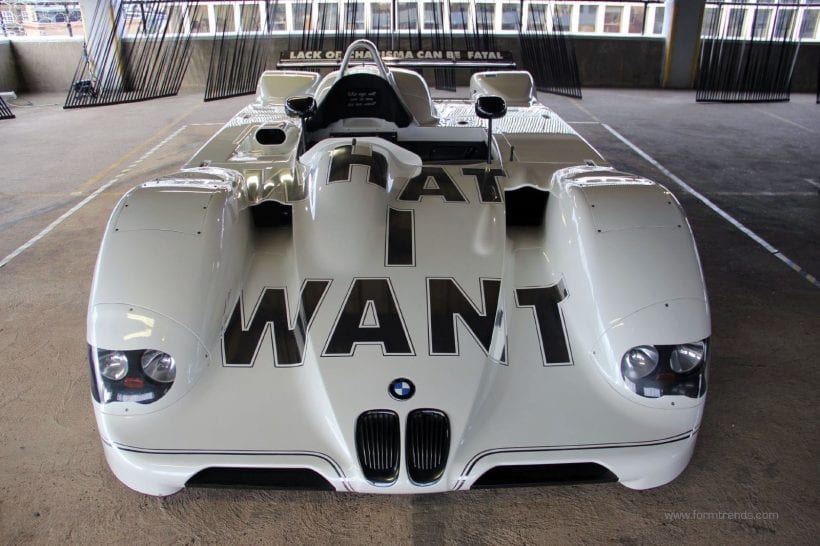 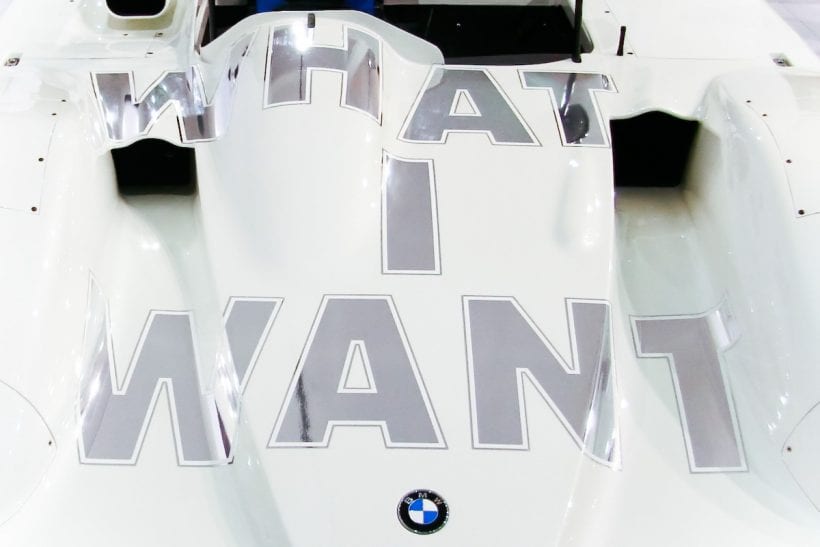 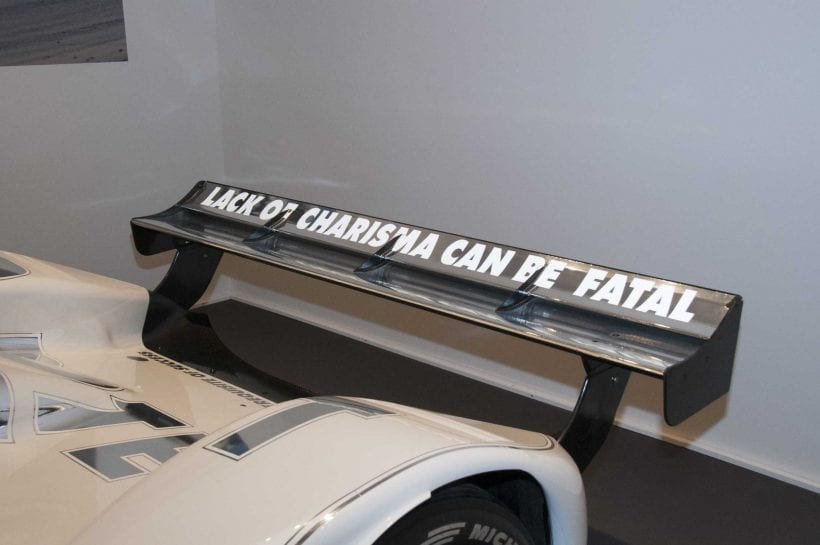 The Volkswagen brand was crucial for the development of artistic cars, which was initially influenced by the hippie movement that mostly used the VW Beetle and the VW Van as their canvas. Out of the hundreds of VW art cars that appeared over the years, the Vochol is one of the most popular. The name is a combination of a Mexican term for the Beetle, and ‘Huichol’, the name of the Wirrárika indigenous group of people. The intricacy and partnership between artists are what distinguishes this car. The eight artists from two Huichol used 2,277,000 beads on the car, as the Vochol is made with striking and beautiful colors and patterns, depicting things from the Wirrárika culture. 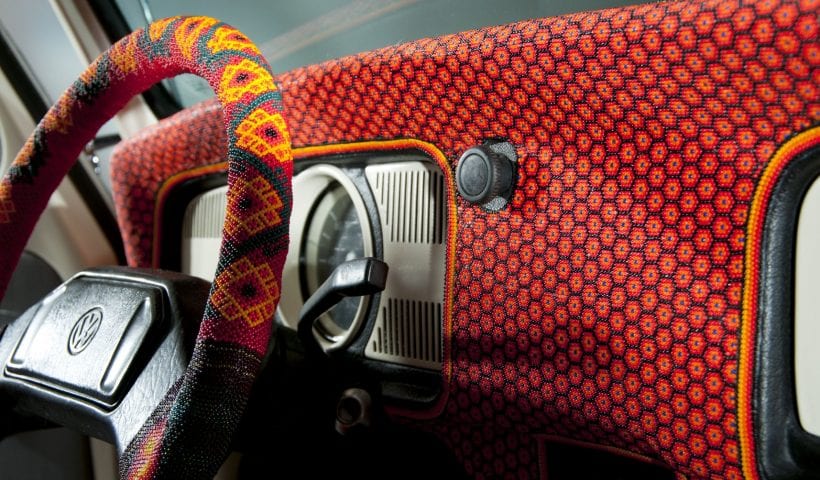 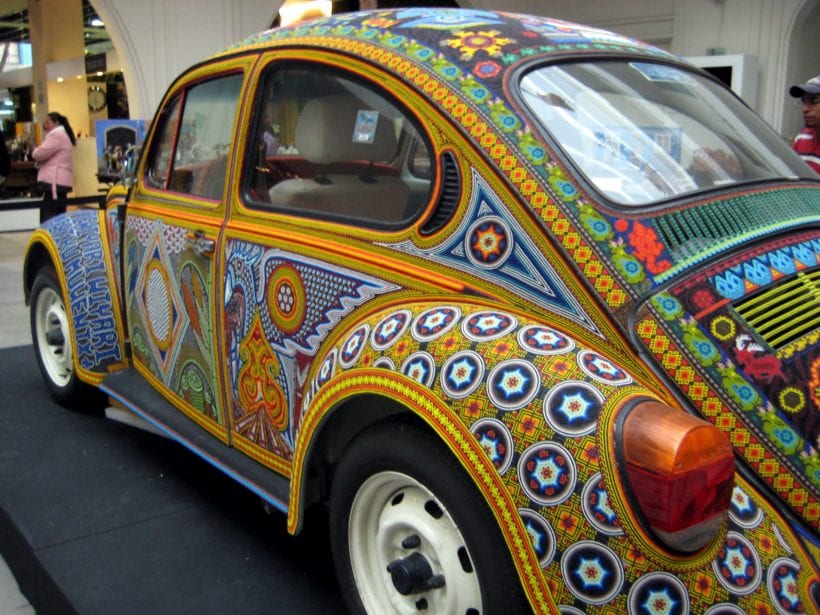 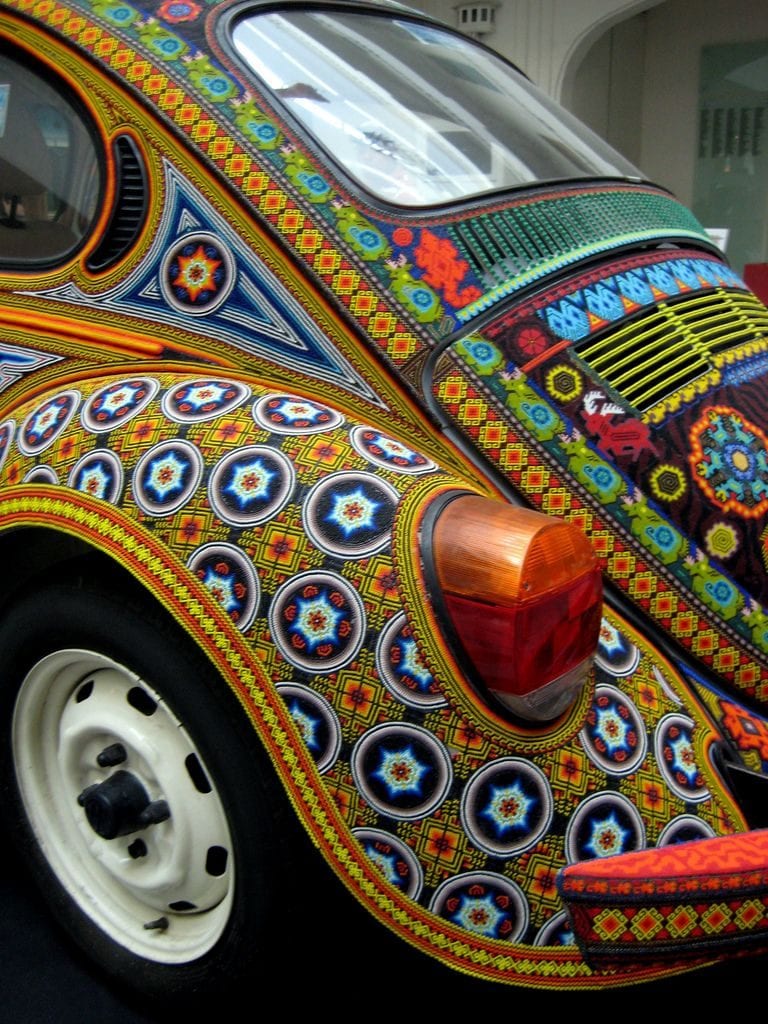 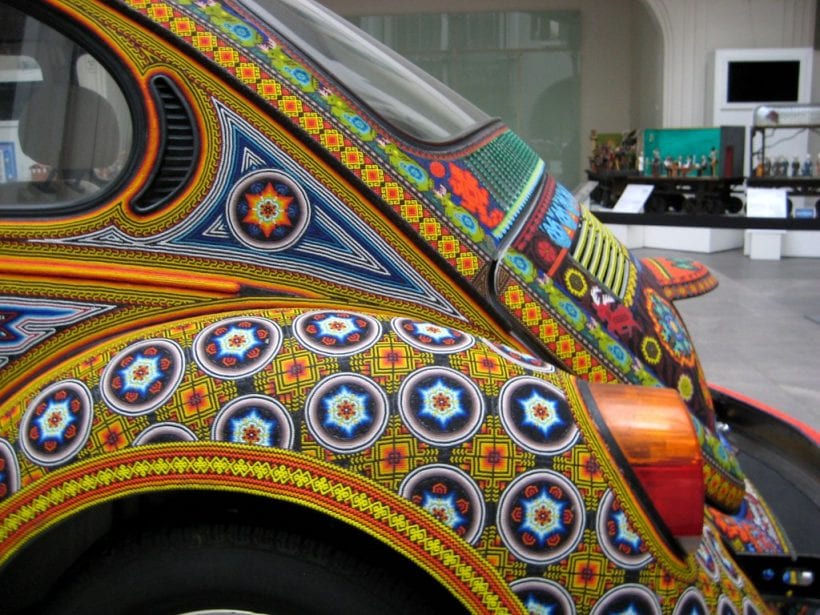 This is perhaps the most valuable art car in existence. Practically priceless, Andy Warhol who used his renowned style to paint it himself, made this BMW M1. Like the other art BMWs, the car was used at the Le Mans. The art contradicts the form of the car, which makes it harder to recognize the true shape underneath. The technique of the artist is present in abundance, as he used his finger strokes over the sides to portray a sense of speed. On the back, he signed his name with his finger. There were plans to record the process on video, but it only took Warhol thirty minutes to finish, so the videographers missed it. 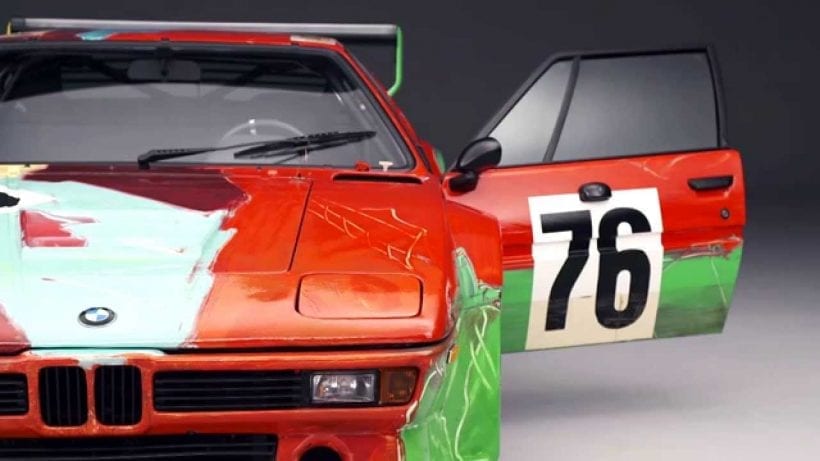 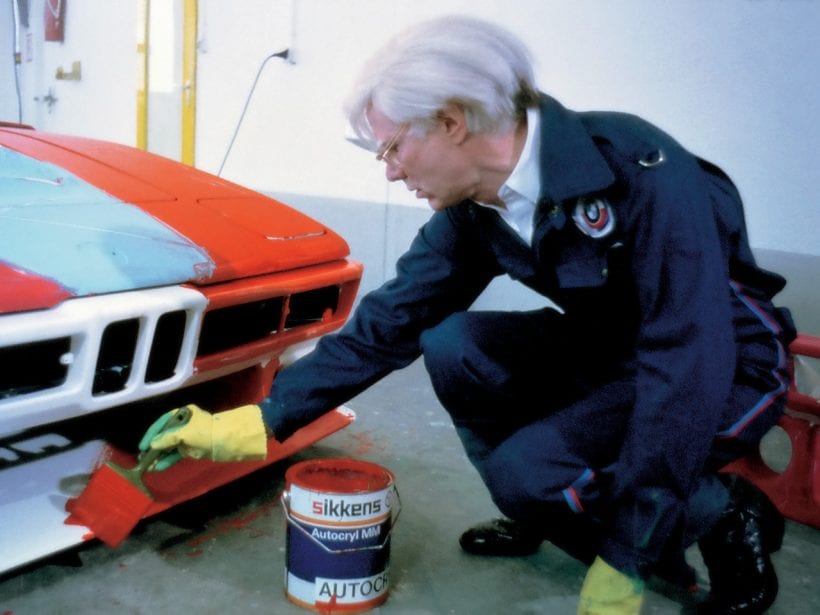 It was crucial to use a 911 for the art community, and their dream was realized with the ArtCars Project, a community that chooses renowned and proven Canadian artists to work on the iconic 911 shape. Marcel Barbeau is an award-winning artist, whose international presence came after his work on Master Piece 4. This amazing car features geometric stripes and colors that complement each other, while the striking and bright color choices are evident throughout the bodywork. Through the use of 3D effects, the art cars are more interesting to some, this is very true for Master Piece 4, where every angle changes how the car is truly seen.

A French artist César Baldaccini was tasked with the creation of this unique McLaren F1 GTR back in 1995. Since then, the piece has been auctioned for $3 million, meaning it is the most valuable art car here. The car sports a modest silver shade with black airbrushing, and the lines are emphasized with simple and cohesive designs, which do not distract the eyes from its shape. McLaren commissioned the car through BMW after they expressed an interest in developing a Le Mans car. The F1 GTR model used a BMW engine, which allowed them access into their prestigious Art Car Program.