American muscle cars are evidently going through a renaissance lately. They were here all the time, but for more than a few years they didn’t have anything special to shout about. The old recipe of cramming V8s under the hood of handsome coupes is still present, but we have new stuff added to the mix. They are not just fast in drag racing anymore, as they can corner, and in a sublime way, indeed. They even manage to surpass natural dominance of Germans in this field, so even Europeans can put aside BMWs or Porsches and pay attention to one of the oldest rivalries in the automotive world. So, ladies and gentleman Mustang vs. Camaro down below.

AT THE BEGINING Mustang vs Camaro

Ford introduced Mustang in 1964, and whole sports car segment went on fire. Sales numbers were so high that probably nothing will ever reach those in the case of any sports car. Chevy was paying close attention to the market and just two years after this the first Camaro debuted. Dodge gave an answer with Challenger coupe in 1969, but it was gone quickly after that. It was later briefly revived as rebadged Mitsubishi, which we bet Dodge would like to forget, and again finally in 2008 as proper muscle car, which hadn’t learn to corner in the meantime, so main battle lies on our two fierce rivals.

Each of them went more modern in recent years. When the current generation of Mustang debuted the whole fascia was modernized, losing some of the brutal muscle car appeals. Luckily rear end remained manly as it can get, preserving some of the heritage. Recent refresh brought more menace to the front, so at this moment overall result is quite satisfying, although far from Challenger’s retro style. 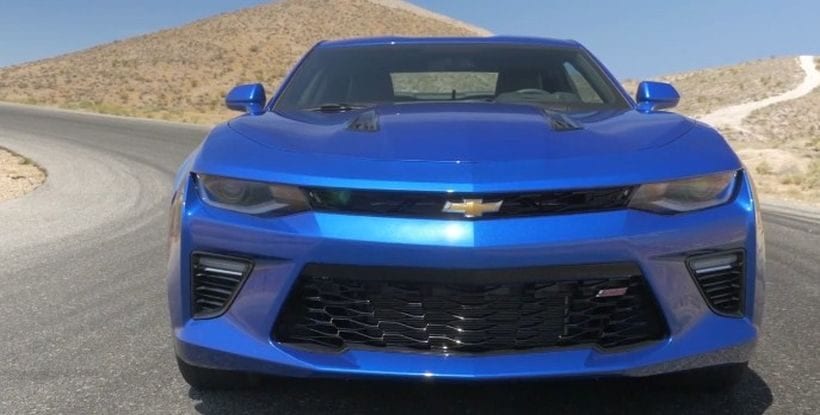 Camaro went somewhat futuristic even with the facelift of the previous generation, and this one pushed things further. Honestly, it lost its traditional muscle car appearance after 80’s, and unlike Ford, it never tried to gain it back. Still, it is masculine with all those hump and muscles over the body, but let’s say that Ford is a bit closer to the original recipe.

Camaro had quite a big problem with the quality of the cabin with the previous generation, which was fortunately fixed, but like the exterior, the interior is just too trendy for a muscle car. It follows Corvette recipe, and we just think that more homage to the heritage wouldn’t hurt. 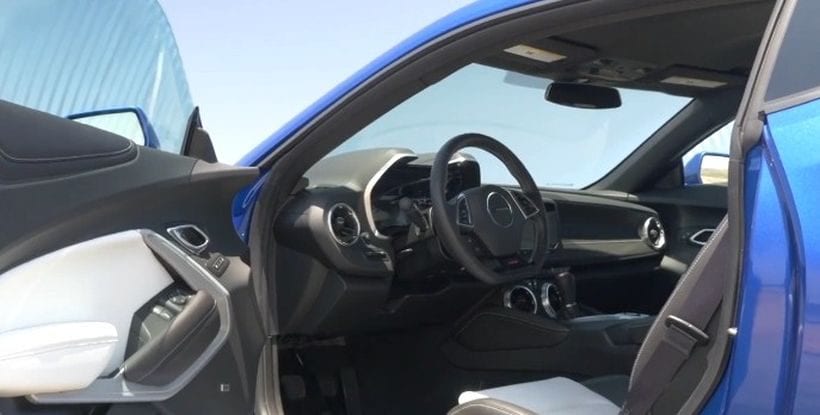 Ford did that way, there you don’t have a feeling that you are sitting in some form of spacecraft, rather in grumping, powerful coupe, which asks for the use of muscle to change a gear. There is nothing wrong with Ford’s shifter, on the contrary, it is just that sense that muscle car can evoke and should evoke in you.

Ford start with 2.3-liter Ecoboost I4 delivering 314 hp and 320 lb-ft of torque. Camaro has an answer in 2.0-liter turbocharged I4 rated at 275 hp and 295 lb-ft. It is obvious that Ford is winning with the base offer, as its thing reach 60 mph in 5.2 seconds, while Chevy takes two-tenths more to do so. But as we move further things are changing. Mustang ditched V6 offer recently, while Camaro still has 3.6-liter naturally aspired one boosting 340 hp.

When we move up, we reach main muscle car territory or V8s. Ford GT model has 5.0-liter naturally aspirated unit delivering 450 hp and 400 lb-ft while taking only 4.5 seconds to 60 mph. But guess what? Camaro SS model has Corvette engine underneath, or 6.2-liter naturally aspirated V8 boosting 455 hp and 455 lb-ft and taking half a second less to 60 mph. So, with the exception of the base offer, Camaro is significantly faster with its V8, and it still offers V6. But if you thought that reaching over 400 hp is enough for this kind of game, you couldn’t be more wrong.

Both of them could go way beyond mentioned figures, and they do. If you want something special from Mustang, as always turn to Shelby. Shelby GT350 model pumps out 526 hp and 429 lb-ft from 5.2-liter naturally aspirated V8, taking only 4.3 seconds to 60 mph. Take highly striped R version and time will drop below 4 seconds line. And one more thing, mentioned V8, also known as Voodoo, has a flat plane crankshaft, and think about how often you see something like that outside area of McLaren P1 for example. As for Chevy, it went even crazier. We have same 6.2-liter V8, but now supercharged, which triggered power rise to staggering 650 hp and 650 lb-ft. ZL1 Camaro then reaches 60 mph in 3.4 seconds, so quite faster than Ford.

They booth handle sublime, unseen for muscle cars before and quite baffling honestly as even German offer was left in doubt. If you are looking for hard-core track abuse of them, point your gaze toward Shelby GT350R version. It is a completely non-compromised thing, and since new Camaro Z28 hasn’t arrived yet, you might think that Chevy doesn’t have a proper answer. Think again as a 1LE package make every Camaro one of best handling cars that you can buy. 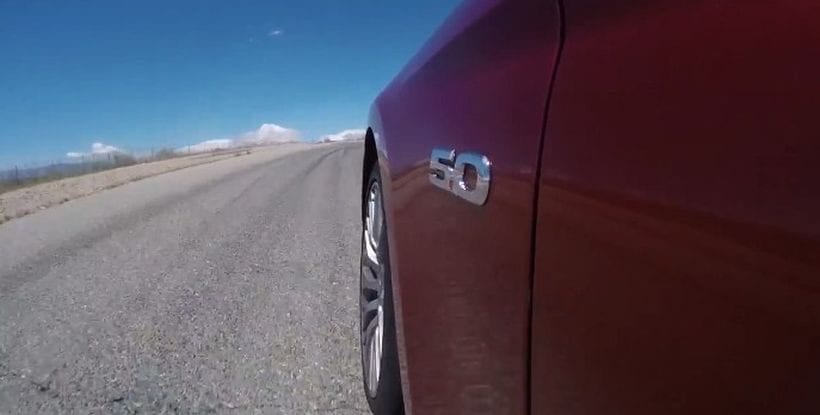 Mate that package with ZL1 model, and you’ll reach lap times of Corvette Grand Sports. Also, GM’s magnetorheological dampers set the bar so high for the automotive industry, that all rivals will have to work quite hard to reach it. Don’t get us wrong, Mustang is a beautiful thing to rush through corners, it’s just Camaro came dangerously close to Corvette, and that should be another territory. Interestingly, if we take both models without ZL, 1LE and Shelby badges, in their base offering, in that case, tables are turned as Mustang outclass Camaro.

Ford’s offer starts at $26k for 2.3-liter I4 while the GT model with V8 goes from $33k. Camaro entry model comes with the same figure, but SS model with V8 is five grand pricier. Shelby GT350 starts at $50k while for R version you need to cash out additional $13,5k. Chevy ZL1 price tag starts at $62k, while the tag of added 1LE package is unknown at the moment, but take it around five grand for example and we would say it is a must for any true car lover. Both of these have an offer of 6-speed manuals, while you can opt for 8-speed automatic in Chevrolet or much better 10-speed one in Ford which just replaced the older 6-speed unit. This 10-speed transmission was developed jointly by GM and Ford, and you can get it in ZL1 model, but sadly not below, unlike in Mustang where it is offered across the whole lineup.

WHICH ONE IS BETTER THEN?

Mustang vs. Camaro? It depends, of course. If you are for macho, muscle car appearance, and you just couldn’t stand Challenger lousy behavior in corners, then Mustang might be your thing. Also, its cabin is quite more mainly shaped, honorably respecting heritage, so visually Mustang takes a sweeping victory. Also, if you are interested in base offers, Mustang is faster and better behaved. 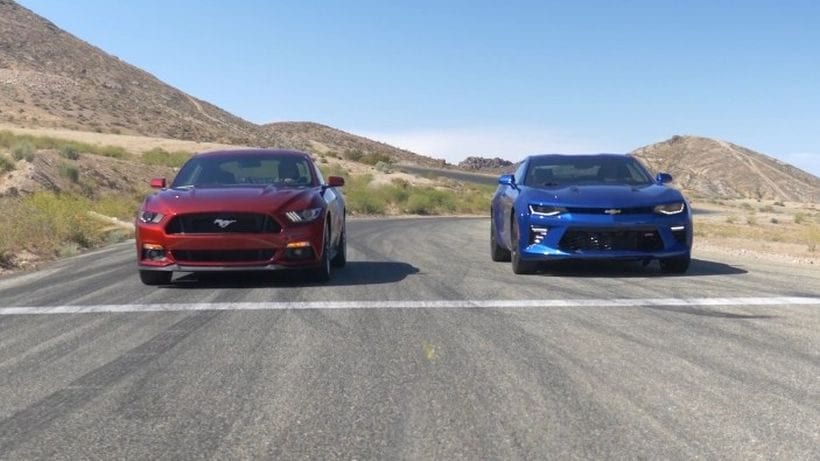 But if you are looking for proper fun at the wheel, Camaro is just outstanding and unmatched. It is pricier in higher echelons, but 1LE package and ZL1 model are simply out of this earth, and there is nothing near to it in its price range, at least until Ford finally brings Shelby GT500 model. There you have it! Looking to spend around $30k, go for Mustang. Not being shy to cash out above $40k, Camaro is yours to go. Hope we helped…