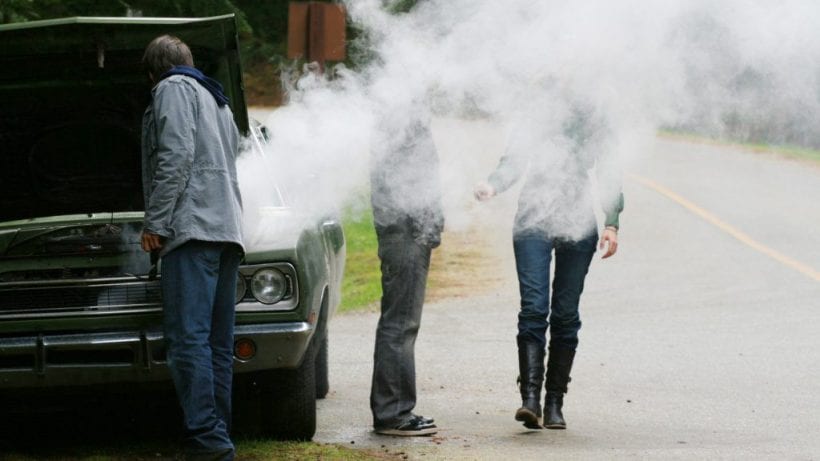 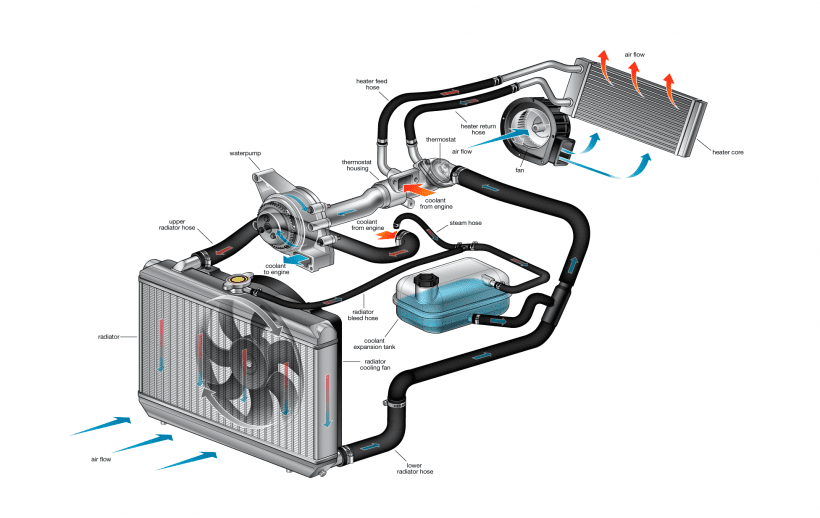 In fact, if you have a problem with the water pump or another art of the cooling system it’s possible to keep the temperature of the engine down simply by maintaining airflow through the radiator. Of course, it’s not recommended to do this for an extended period of time as you’re likely to damage the head gasket and cause an array of engine issues.

One of the best ways to prevent radiator issues from occurring is to get a regular radiator service, you can find out more here.

To help you take early action and prevent more serious problems, you should also be aware of the five most common radiator problems.

The most common issue with a radiator is actually leaks. These can originate from the hoses or the radiator itself. Hoses are subject to extreme pressures and will perish as they age. It’s possible that a hose can spring a leak or that the connection can work loose, creating a leak at the joint.

In general, joint leaks will cause a slow loss of pressure in the coolant system while a hole in the pipe can cause a sudden loss of water, that’s potentially deadly for your engine.

Of course, leaks can also occur in the radiator itself. One of the downsides of it being sat at the front of the vehicle is that it is most likely to be hit by road debris. This can punch holes or dents in the radiator. Holes cause leaks but dents may simply restrict water flow, making the radiator less effective. 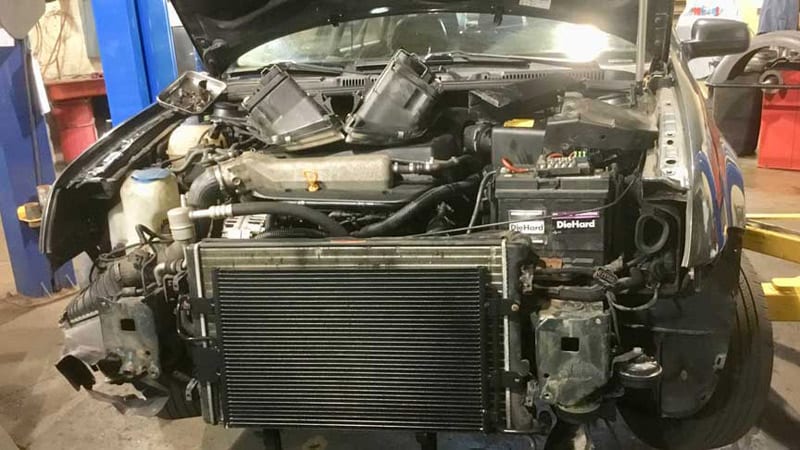 Rust occurs whenever water, metal, and oxygen are present. These elements are all present in the cooling system of any vehicle. Unfortunately, you can’t usually see the effects of these components as the rust will occur inside the pipes. The rust will gradually increase and then create hoes in your radiator, causing leaks and the associated issues.

If you notice rust building on other areas of your vehicle there is a good chance it will be forming inside your radiator. The rust will also turn your coolant brown and is likely to make your car run hot.

It’s a good idea to flush the engine regularly to prevent any rust issues from occurring. 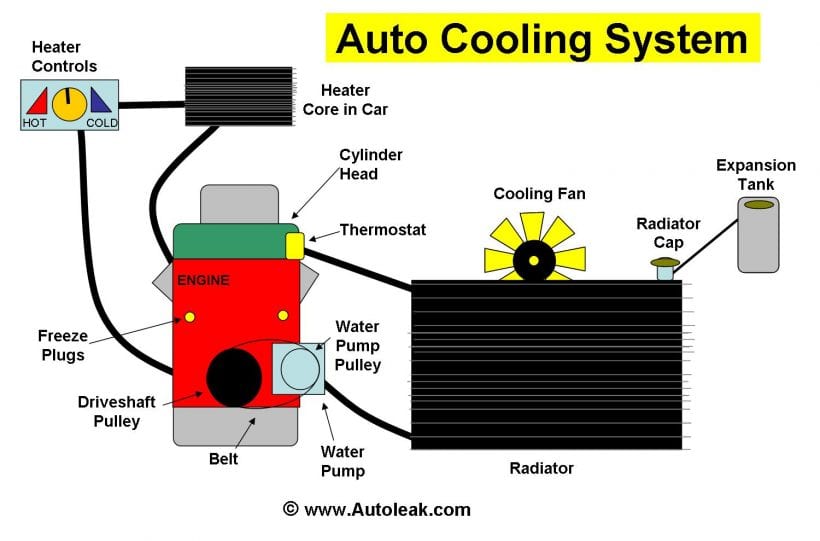 Water is not pure. There are minerals in it that can react with other substances inside your coolant system. Alongside this you’ll find debris from the inside of the cooling system moves around with the coolant.

This debris and minerals will tend to collect in similar spots, slowing the flow of water. You’ll know there is an issue as your car will be running hotter or even overheating regularly. If there are no leaks or rust you can suspect gunk building up inside the system causing clogs.

Ultimately the partial clogs will block the pipes or radiator completely, causing the failure of the cooling system and your car to overheat. 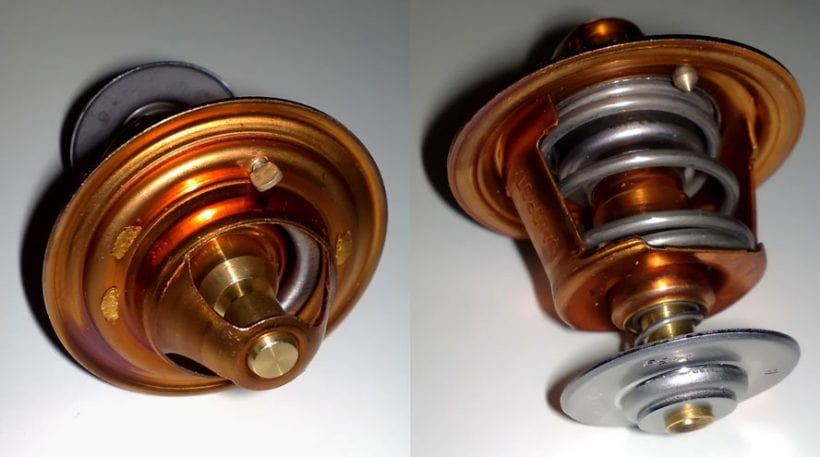 The thermostat usually sits next to the water pump on the side of the engine block. It stays closed when the engine is cold, allowing it to heat faster. Once the engine has reached temperature the thermostat opens, allowing the coolant to circulate through the radiator. This helps the car to maintain the correct operating temperature.

When the thermostat fails it will be stuck in either the open or closed position. An open thermostat means your car will take a long time to warm up on cold mornings. A closed thermostat is more serious as the water will only go round part of the cooling system, it won’t be cooled properly and will increase the operating temperature of the vehicle. This can lead to overheating.

You should also be aware that the water pump itself can fail, this prevents the water from circulating properly as there is no pressure to keep it moving. If the coolant doesn’t circulate it won’t be able to cool the engine, again your vehicle will overheat.

Unfortunately, the only way to resolve this is to replace the thermostat or water pump. 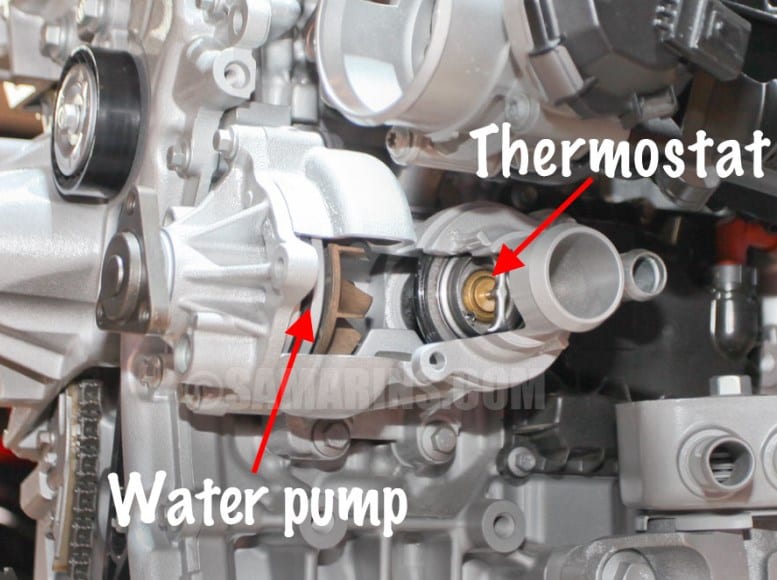 The fifth most common radiator issue is when the fan has failed. Most radiators have an electric fan attached to them or situated very close to them. This pulls air into the engine bay through the radiator, cooling the water. It usually activates when the engine temperature goes above a specific setting.

In many cases the fan needs to come on when you’re stuck in travel, this creates the same airflow that driving faster does. If the fan fails the air won’t cool the water and the car will quickly start to overheat.

This is another time when the fan or the fan relay will need to be replaced.

Knowing the most common radiator faults means you can stay alert and have issues dealt with quickly. But, it is still important to get a professional to look at the issue and ensure you’ve diagnosed the right fault. If you haven’t you’ll be wasting money replacing the wrong part and your vehicle may still overheat. That’s not the best outcome, an annual vehicle inspection is a much more cost-effective solution.