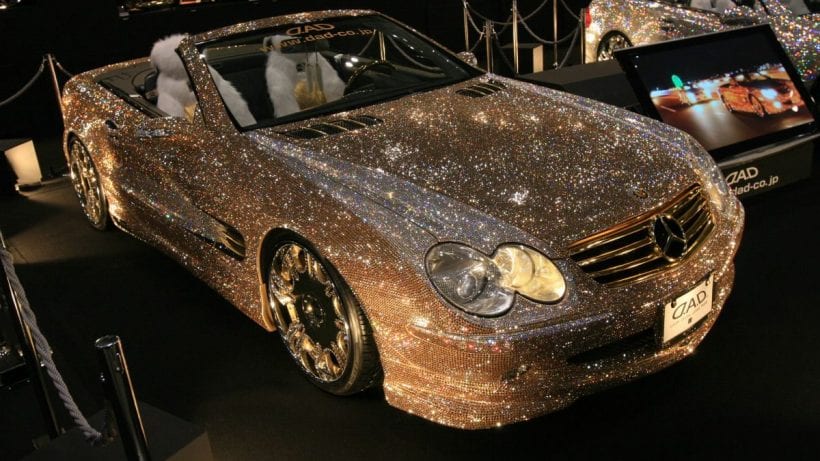 Believe it or not, the latest trend among rich people has emerged (oh no, how did that happen). Of course, it has become quite commonplace that people who can buy anything that money can buy spend their fortune on completely ridiculous things. However, by spending millions, they show their status in society and point out that they have a ton of money. The last thing that has become incredibly popular among rich people is wrapping luxury cars with shells that make these powerful machines look like made of marble. Perhaps this is not so strange, considering that in previous years we had similar scenes that we could see. Specifically, the trend at the time were Swarovski crystals or even gold. Still, the price was a few million for this boasting. 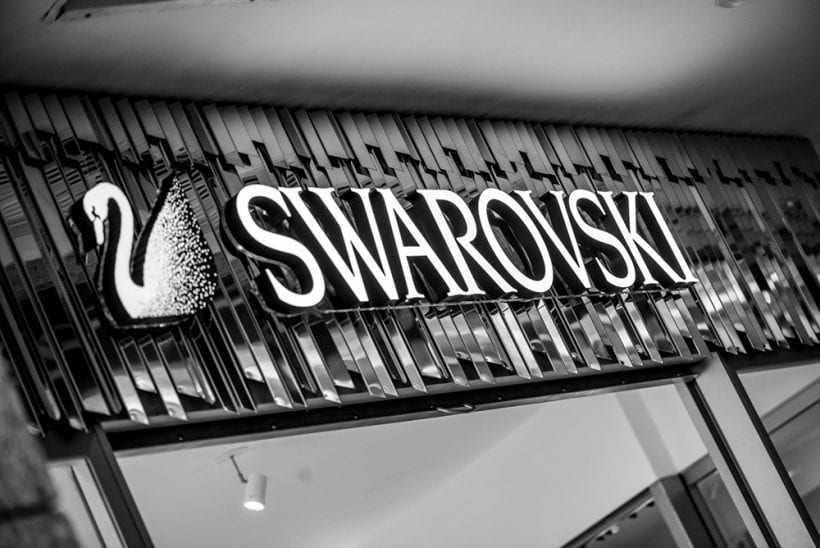 You are probably wondering now who owns these supercars. We can tell you with certainty that the photos were made in London, but not who exactly owns these machines. The fact that reveals to us the country from which they came are license plates. If you look closely, you can easily conclude that these cars were registered in the Middle East, more specifically in Saudi Arabia. This is the time of the year when the so-called Supercar Season is underway in London, with many visitors coming from the Middle East. Logically, the main focus is on their expensive machines that everyone in attendance can photograph and dream of maybe someday driving them.

However, why do they come to the luxury parts of London such as Knightsbridge, Kensington or Mayfair where these photographs were taken? Quite simply, it is already a tradition, but earlier, the reason was completely different. Namely, during the summer days, the average temperature in the Arabian Peninsula is over 100 degrees Fahrenheit (which is about 38 degrees Celsius). In such conditions when it is too hot no one wants to drive and such a high temperature is not suitable for these expensive super cars because the high heat can cause a malfunction of many electronic components. Therefore, the more practical option is to send them with a private plane in Europe to a city such as London and show only one small part of their wealth. In doing so, rich people will excite all those who came to take pictures of cars that are likely never to be approached. So, an unforgettable experience for both classes. 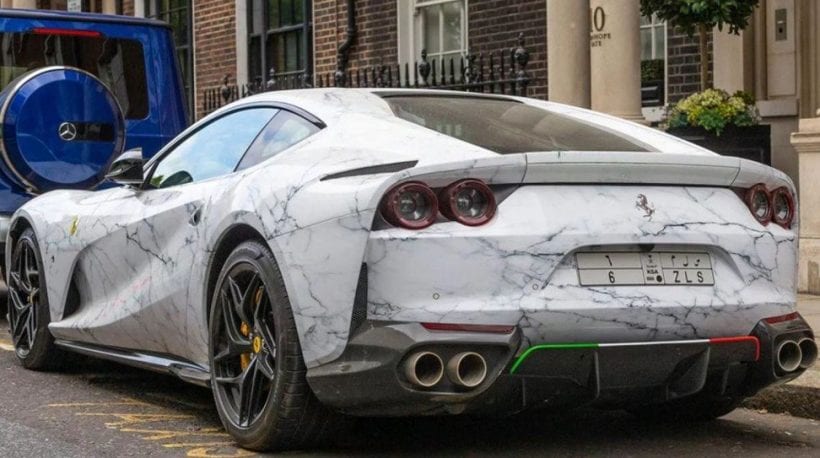 According to Fox News and SWNS, these marble-wrap machines that were photographed in Mayfair and have attracted a large number of car enthusiasts but also YouTubers who come to be the first to upload videos and images on their social network accounts. However, what about ordinary people, do they like this? Here’s what one passerby said:

“They look like the sort of sink you’d get in a gaudy hotel. Obviously, the owner thinks they look fancy, but to me they look ridiculous.”

As for people on social networks, there are various comments. Some are enthusiastic, others don’t like it at all, but mostly the impression depends on the brand of the car. True, on some supercars this marble wrap looks really luxurious and pretty, but on other models it just doesn’t fit and doesn’t give the impression it should be. So, a little advice for all mega-rich people from the Middle East, think about what wrapper you are using, it will maybe ruin a great machine.

As you can see, these are very expensive Ferrari 812 Superfast and Bentley Bentayga SUVs. The price of the Ferrari 812 Superfast is over half a million, while the Bentley Bentayga is “more affordable” with a price of just under $300,000. Beside them, there are many more luxury cars that are coated with like-marble wrap. For example, if you put in a little more effort, you will be able to find a lot of such cars. We were able to find a Lamborghini Urus and several other Bentleys with the same outlook.

In addition to parked wrapped Ferrari and Bentley, there are Mercedes-AMG G-Class and another Ferrari that don’t have stone-style covers. In our opinion, the Ferrari looks fantastic both with and without wraps, but Bentley is much better without it. 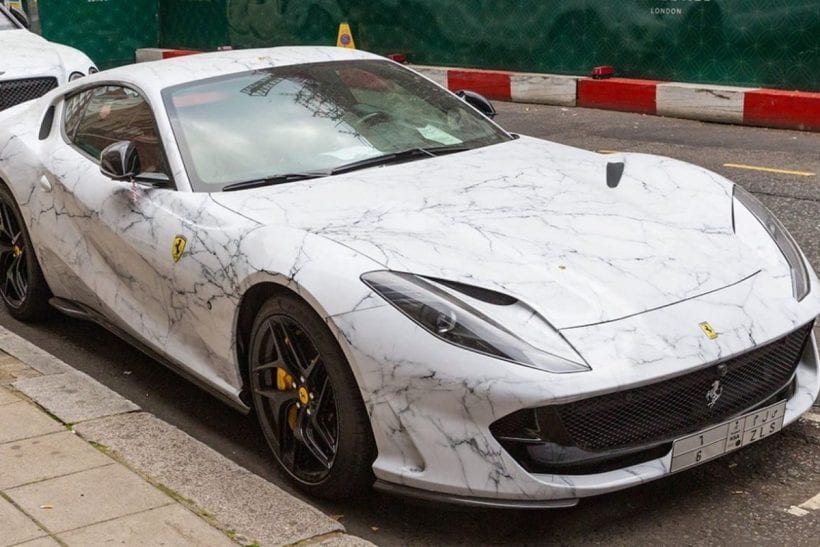 Definitely the most expensive marble-wrapped vehicle is the Bugatti Chiron, and there are several samples, with an astonishing price of $3 million. Although the ultra-lightweight carbon-fiber body was a big hit among car enthusiasts until recently, this is not the case in 2019. Simply, the rich people of Arabia realized that simple paints was no longer attractive, but something needed to be done to make their supercars look epic, like statues created by the best Greek and Roman sculptors.