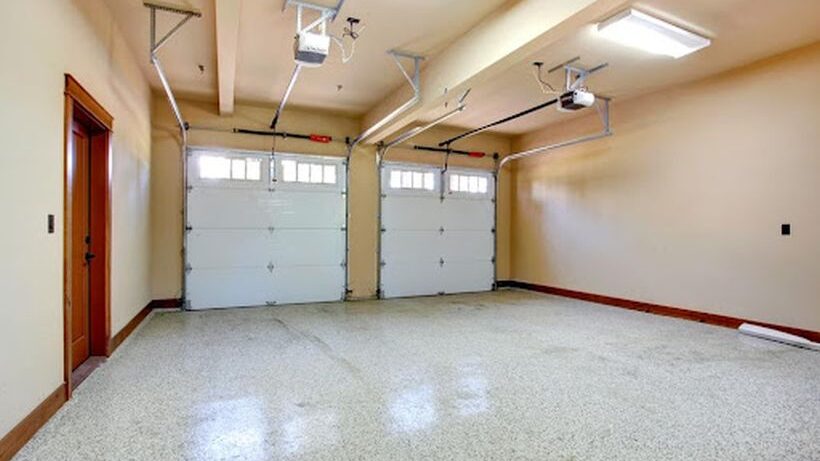 Garages are a basic part of the infrastructure of domestic and many commercial spaces. These spaces tend to be small or big depending on the usage and hence the lighting overlay and requirement differs a lot due to their function. Mostly garages are for parking of vehicles but they also serve as storage areas and workshops.

The size of a garage determines its use in most spaces, overall people recognise the value of garages and how they need a sustainable setup to uplift the working conditions there. Most garages require a lot of light if the ceiling height is small and there’s more room to fill. The light fixture must be broad beamed and compatible.

The most common type of light fixtures for general lighting in garages is fluorescent lighting. They illuminate the garage but they are not that energy efficient and sustainable as LED light fixtures.

What are LED light fixtures?

LED light fixtures are a modern day substitute to traditional options for lighting in various spaces. They offer better illumination as well as sustainability for long term lighting. LEDs mostly are integrated and work as a chip which can be fixed in a machine. Integrated LEDs are better at work and produce very bright and uniform beams of light. There are LED lamps which can retrofit older/ traditional fixtures as well.

Both kinds of LEDs are good at their function and provide a lot of benefits when it comes to upgrading the light layout. Retrofit options are easy to integrate without removing the entire fixture while newer fixtures require a bit of careful planning. 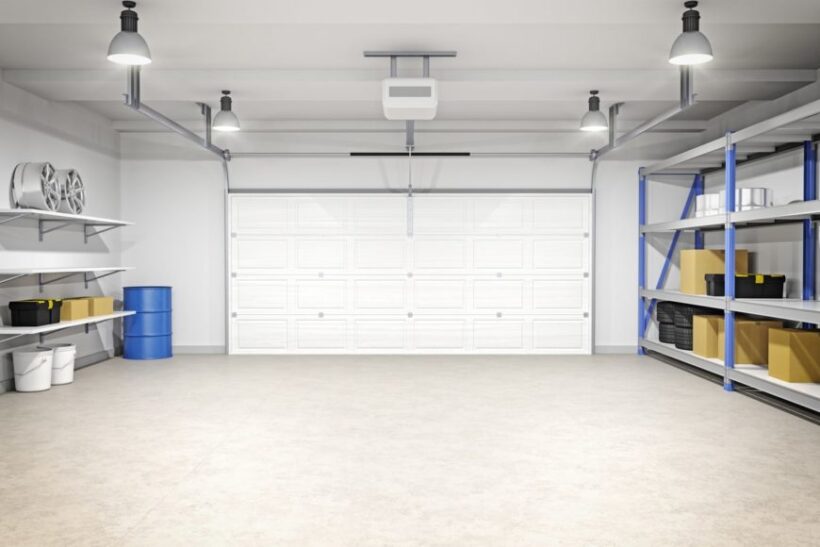 There is a vast variety of light fixtures which are suitable for garage lighting. In most cases it is largely dependent on the layout of the garage and there is always room to integrate more fixtures for extra light and efficiency. If we do not follow a certain layout it is easy to choose a certain kind of fixture for the garage but  if we do follow a specific layout it is easy to determine the light fixture for different purposes.

The basic requirement of any layout is a general lighting layer. The general lighting layer is for visibility all around the garage. It should be bright and uniform. Second priority is task lighting as garages are also work spaces which require focused and bright light for efficiency at the work desk.

The different kind of LED fixtures for general lighting layout are: 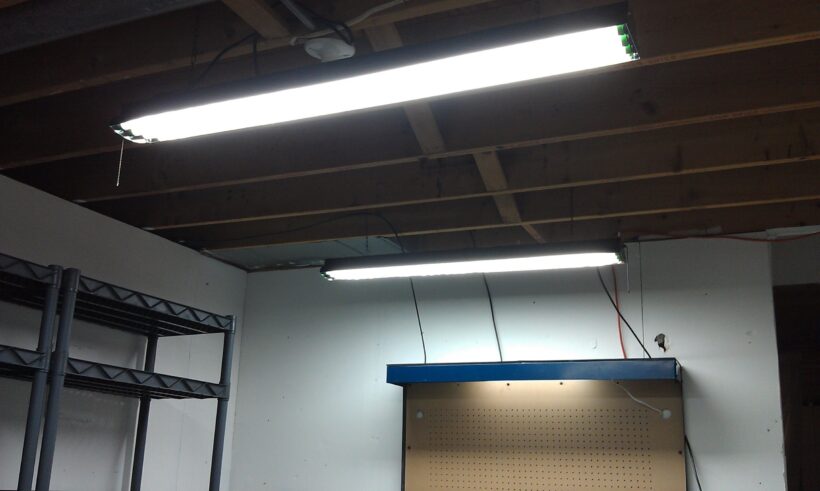 Shop lights are largely a modification of fluorescent shop lights. These linear fixtures are quite efficient and feature a thin tube of various sizes integrated in an aluminum housing. The housing supports the fixture and also has mounting brackets which allow easy installation at different elevation levels. They are also available in plug n play options which magnify their impact over other forms of lighting.

LED high bay lights are the most powerful light fixture for any commercial or industrial application. Although the round or commonly known as UFO high bay lights are an excellent fit for garages with higher ceilings than most. These light fixtures are super easy to incorporate in a general lighting layout for parking garages as well as other types of garages which have a lot of room for work stations as well.

For task lighting there are several other light fixtures which can be included in pre-existing layout. These fixtures do not disrupt the general lighting considerations, instead due to their easy access and installation they just incorporate in the existing setup and facilitate the lighting conditions. These fixtures are: 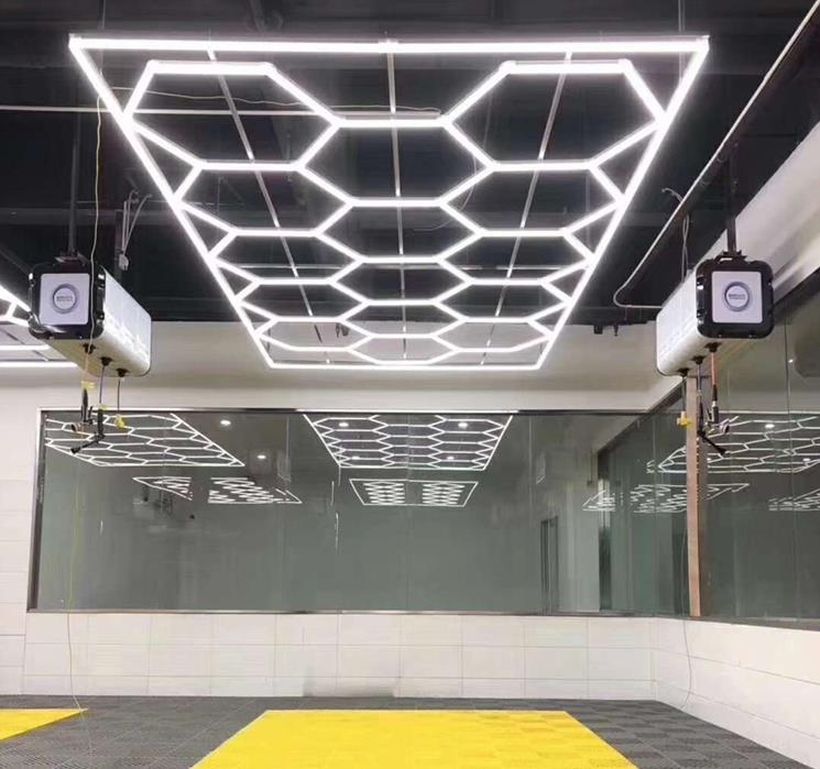 LED strip lights are super convenient, easy to install light fixtures which add extra light to the setup and provide more overhead lighting over the workstation. These strip light fixtures are available in many different designs for compatibility and allow a lot of variations to enhance focus.

LED under cabinet lights are supplemental lighting for most garages where even though general lighting is enough but these provide an added layer of lighting under or around storage shelves and work stations. These undercabinet lights are available in a variety of designs as well as specifications which facilitate the working conditions around the task zones.

LED lights consume only a fraction of energy to produce more lumens than an average lamp. They are brighter and yet easy on the eyes. The Light from the LED fixture is optimal and glare free which does not cause any disruption. The efficiency of LED light fixtures can be measured on many instances including their ability of generating less heat at higher voltages despite supplying the same wattage as that to traditional lamps. 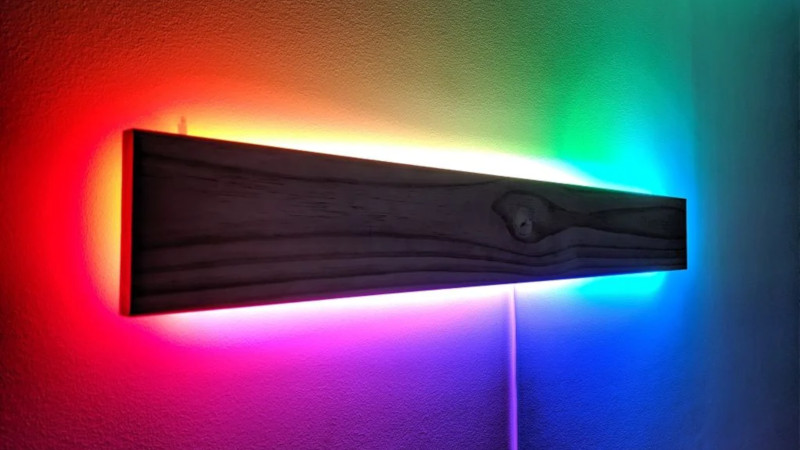 LED lamps are super low maintenance as they do not require give out unless outdated. They have an average lifespan of around 10-12 years and during this time period they effectively reduce the maintenance costs on a yearly basis.

LEDs not just provide more lumens but they are also an effective form of lighting due to their capability of customisation. These lamps can produce warm yellow to bright white or daylight like light which is measurable on a kelvin scale ranging from 2500K to 5000K or above. Moreover the CRI or Colour rendering index of LEDs is above 80 which is also easy to select. This allows optimal brightness with increased focus to the detail as this light makes the objects under it appear as they are.