The Ford lineup of pickup trucks is amongst the best in the entire world. They have a truck for virtually any application. You name it; they have it. Everything from a daily driver pickup to a heavy-duty workhorse one used solely for working purposes. It’s all a matter of personal preference and which one you’d want the most. Arguably the most important one is the Ford F-150. Each model has a special place in the lineup, but it’s the F-150 that’s always the top seller as it’s the best all-rounder. It can do virtually anything you ask of it. We even think there’s no other truck which can accomplish so many things that the F-150 lineup can. If you want the ultimate to do anything go anywhere vehicle this pickup might just be the thing.

The reason why we bring the F-150 up is that of the Ford Atlas concept which debuted back in 2013. See, the Atlas was at first a preview for the F-150, and it was a marvelous thing. The F-150 turned out to be true to the Atlas in many ways a lot of people didn’t expect it. Well now, at last (no pun intended) the Ford Atlas is making an appearance as the 2017 Ford Atlas. If you haven’t already guessed it yes, it is the same truck. The new Atlas is also known as the F-150 Atlas thanks to the Atlas concept which was first revealed in 2013.

Exterior wise, you should be immediately able to tell that the Atlas concept was the predecessor to the new F-150 we have today and the upcoming one as well. The F-150 carried over almost all of the features previewed on the Atlas, and it looks nearly identical, minus a few flashy accessories of course. The front fascia has the double-deck front lights which are extremely cool and look like they came out of something used in the movie set for the Transformers. The strong and bold design of the front fascia continues with the rectangular grille which weirdly isn’t that large in real life. It’s very tough and efficient since it improves aerodynamics, as Ford pointed out. Apart from these changes, the vehicle did not undergo any other major updates. The roof is made out of glass, and the trailer has an electric outlet of 110 V. 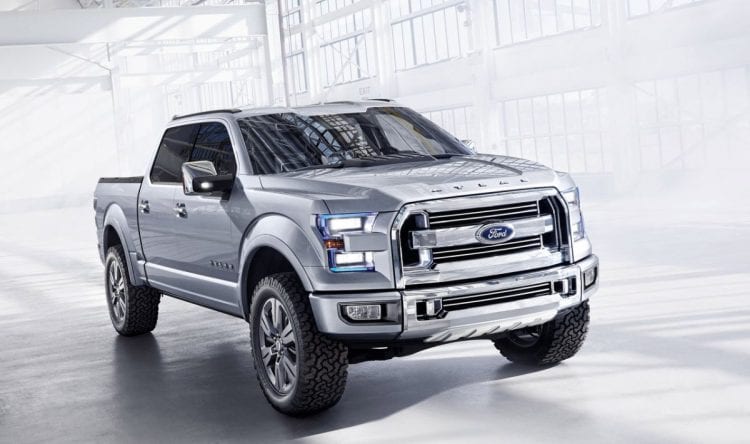 The vehicle is based on the aluminum chassis which makes it extremely light for such a large pickup truck. The F-150 is one of the lightest cars in its class but also one of the strongest. The same aluminum which makes it so light gives it its enormous strength too. Regarding body rigidity and structural integrity, this pickup is second to none. The side silhouette is one of the best out of all the pickup truck with a traditional pickup shape blended in with a high waistline. The rear has the same LED tail lights which also look like they belong on a transformer vehicle. 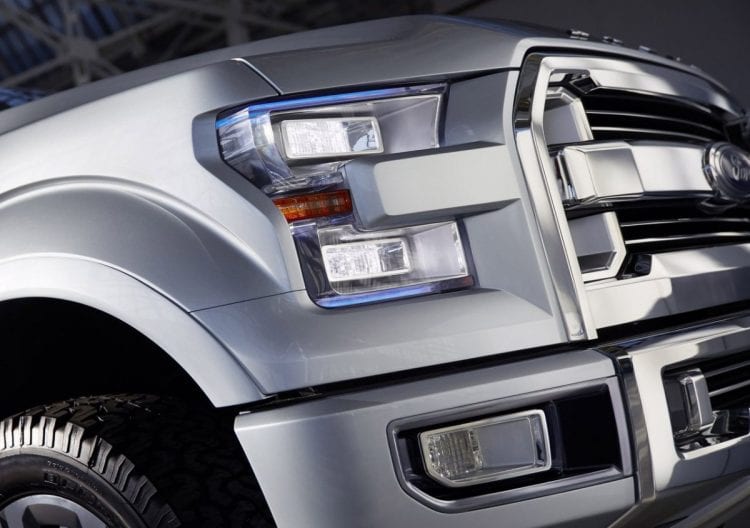 The interior of the Atlas concept introduced the desired look for the F-150 production truck. It was a refreshing thing to see. The styling was new and original, and the fit and finish were above average. Traditionally a lot of pickup trucks have had most of the emphasis put on the off-roading capabilities and the four-wheel drive systems rather than the interior features. We could hear that many pickups have been criticized for bad interior materials and even worse fit and finish. In all honesty not, a lot of pickup truck owners ever cared about that, but the F-150 managed to change all that and bring it to a whole new level meaning they will be able to attract even more buyers. 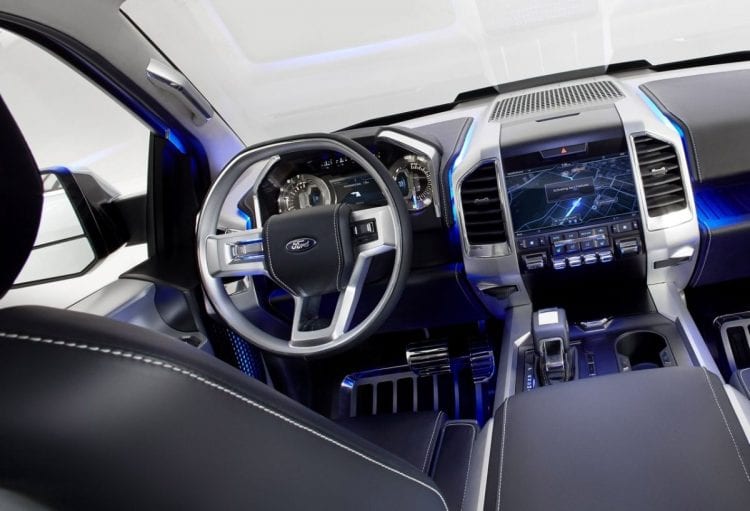 As for space, there’s a lot of it. The front seats are massive; they can accommodate almost anyone including tall and large people. They don’t offer that much support, but it’s more than its competitors. The rear follows quickly too. There’s ample of legroom and headroom, and you can fit even three adults comfortably thanks to the fact that the vehicle is as wide as an entire road lane. The seats themselves are very comfortable for all passengers, and even longer journeys will not cause fatigue. 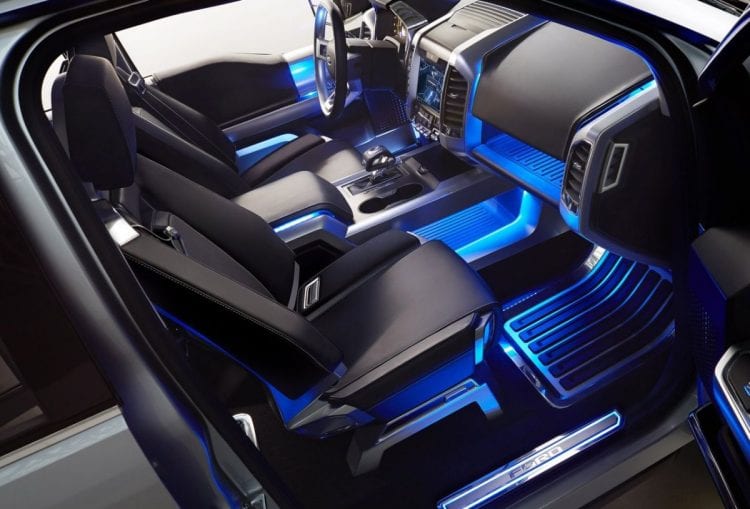 When it comes to the safety features it is top dog there as well. It’s got pretty much everything as standard, and the only optional things are stuff like adaptive cruise control, lane-keep assist and blind-spot monitoring. We won’t even mention the rest of the system such as the ABS or traction control as that’s all standard by now on virtually every vehicle. We’ll have to wait and see what the 2017 Ford Atlas gets regarding standard and optional equipment, but we expect it to be the best spec model in the entire segment if indications are anything to go by.

The engine bay houses a 5.0-liter V8 capable of making 360 hp and 380 lb-ft of torque. This powerplant is paired to the six-speed automatic transmission like the one found in most other Ford models. The concept should be the same as the production-ready vehicle, i.e. it should reach 60 miles per hour in around 8.1 seconds. Despite the weight reduction, the 0-60 mph time is still below average for the segment especially for trucks with a V8 engine. 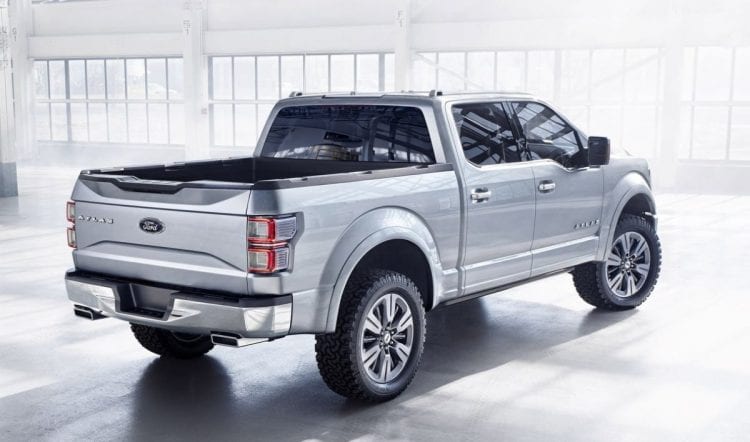 We have to wait a little bit longer to get additional information’s regarding the brand new 2017 Ford Atlas, so no prices are announced just yet. The basic model of F-150 starts at around $26,500 with the highest trims and engine choices going over $62,000. For that price, you are however getting every gadget and toy imaginable, and we think that Atlas will be offered at starting price of more than $50,000 while fully loaded version will reach $70,000. The main competitors are the Silverado, the Tacoma and the Ram 1500. If you ask us, the Ford outshines all of them by a large margin.