Home
Land Rover
Everything about the new 2020 Land Rover Defender 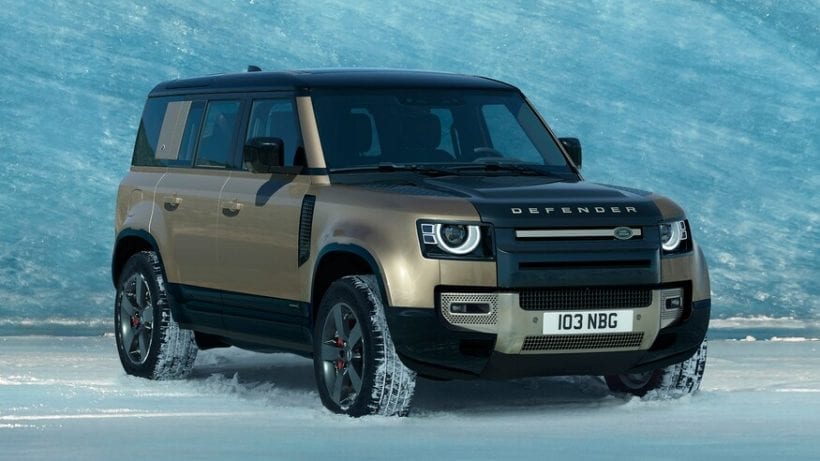 After years, we have our first look at the all-new Land Rover Defender. Although it has a tough mission of modernizing the model while keeping the old-school charm, we think the famous automaker has successfully done just. The newest model is set to debut this year, and come to the dealerships during 2020. For the US market, it will be the first Defender on the market since the year 1997. Read on to learn what is expected from the long-anticipated 4×4 SUV. 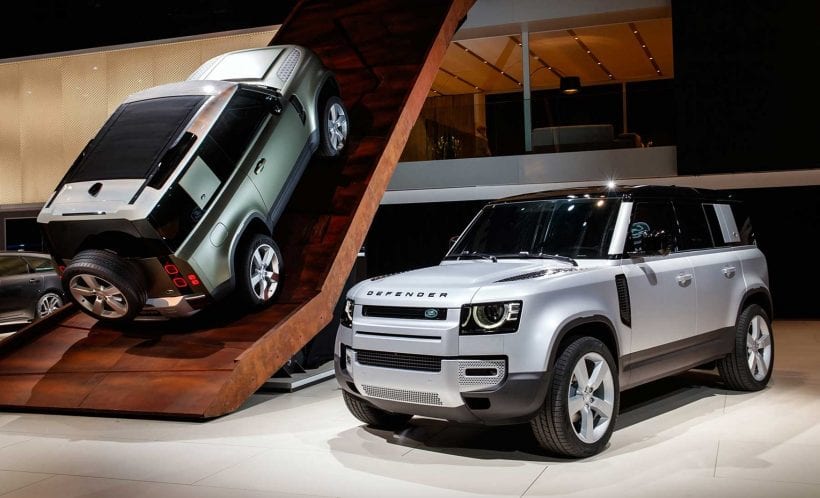 The Land Rover brand has announced that the new Defender will debut at the Frankfurt Motor Show this past September 10, and along with the announcement, they revealed a new teaser picture of the truck that shows the new front grille. The said grill features the “Defender” badging on the hood, an the obligatory Land Rover emblem. To send the message about their plans for the car, the picture also featured a lot of mud. And debut it did, stunning the fans and critics.

An Instagram user, Steven Firth, then shared a picture of the car on his profile, appearing to be on the set of the latest James Bond film, titled “No Time to Die”, coming to theatres in February of 2020. It is not official, but it seems legit. This is what he posted as a caption:

“I’m not going to get in trouble for this — because it’s all over #facebook at the moment! Here is what looks like the first uncovered #defender2020 — straight (apparently) from the film set of the new #bond movie! Makes sense! A few things come to mind. Firstly, the winch is excellent. Secondly, the alpine windows are still there! Thirdly, the rear passenger door looks massive — you’ll never open that in a Tesco car park! Fourthly, there seems to be quite a bit of wheel clearance (though it’s unknown if this is standard height, off road height, or on coils!). Fifthly, checker on the bonnet (yes, the bonnet is a funny shape and there is no real wing to speak of). Sixthly, I’m not sure about the mirrors at all. Seventhly…. well, this could clearly go on a bit!” 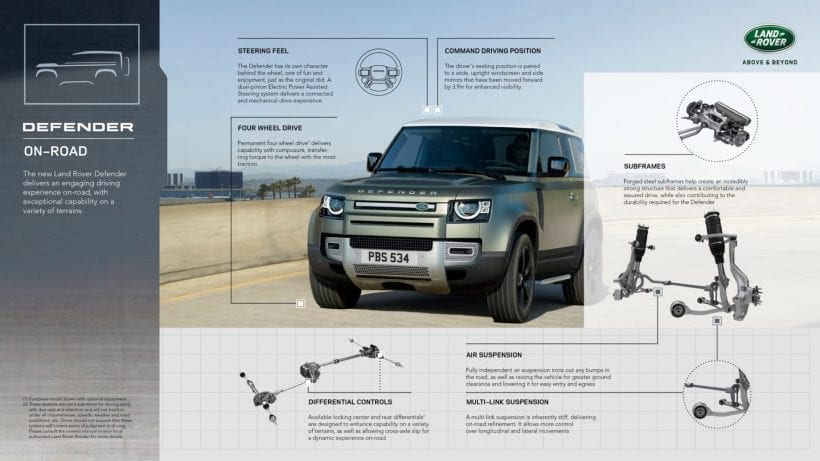 The new Defender comes standard with a fixed coil suspension, as well as optional air suspension. Land Rover representative, Andy Deeks, told Top Gear “the air system actively monitors temperature in the dampers and protects the vehicle by changing the parameters of the suspension as you’re driving, but the coil car is still the most capable car in its class.”

The new Land Rover SUV is also set to have a plug-in hybrid option, with some components made in collaboration with Tata Technologies. If some LinkedIn info is to be believed, a Lear plant in Morocco is currently setting up to start building the high-voltage wiring for the hybrid model of the new 2020 Defender. Top Gear took a ride in the Defender test mule, where they learned more about the hybrid model. It will use a 2.0-liter gas engine, with the option to run on electric alone. One of Land Rover engineers revealed the following: “We don’t have any EV range information at the moment, but it’s same basic system as the Range Rover PHEV.”

Autocar India reported that the new Defender would have 3 wheelbase lengths, mainly the 90, 110, and 130 from the past. These roughly corresponded to the rounded wheelbase of the older versions. For example, the old Land Rover 90 had a wheelbase of 93 inches. This time however, it seems they will just represent the trim levels and not relate in any way to the actual length. The 90 be 101.9 inches, and an overall length of 170.2 inches. The 110 will sport a 119-inch wheelbase and 187.3 inches overall, while the longest model with share its 110 wheelbase, but have the total length of 200.8 inches.

Slovakia Factory and the Codename 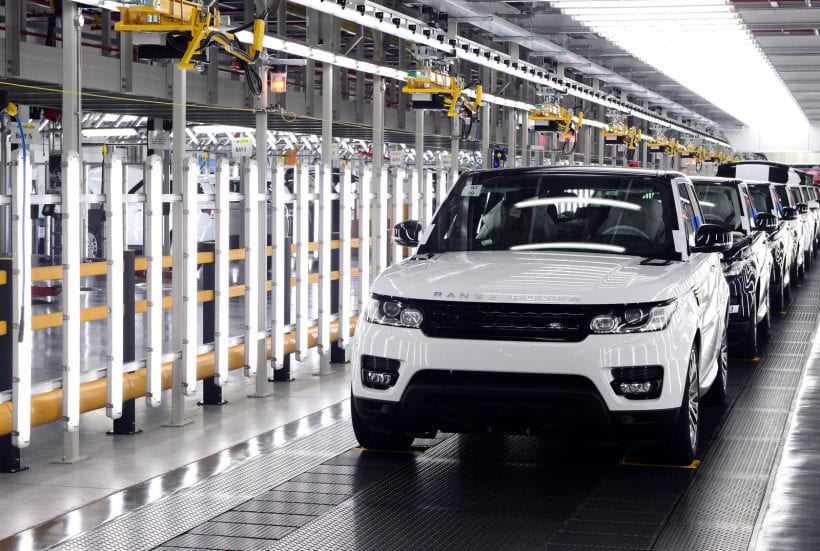 Land Rover celebrated their 71st anniversary of the debut of Series 1, at the 1948 Amsterdam Motor Show. The celebration took place on April 30, 2019. The brand confirmed there that the 2020 Defender will be produced in Nitra, Slovakia, together with the Land Rover Discovery. In addition, it has been revealed that the company has done over 750,000 miles of testing with various Defender prototypes.

The SUV used code L663 and had the project name “Darwin” while being developed. The upcoming 2020 Defender rides on the D7U platform, previously used by the Range Rover Sport and Land Rover Discovery. The L663 Defender was listed alongside the L462 Discovery in many reviews, which means they share many components.

There is also a new patent application in the Land Rover, showing a central tire inflation system. This is a very detailed system that interacts with different modules of the vehicle, and adjusts the pressures in the tires based on driving mode the car is in. Usual functions of the central tire inflation system are displayed, but they went a step further and integrated Puncture Assist Mode as well.

This brand new addition offers tire inflation for various environments and circumstances as you drive. The base tire pressure of 29 PSI is set, and then adjusted based on the selected options. The standard on road mode is 33 PSI in the front and 36 PSI in the rear. These values are similar to the Land Rover Discovery, understandable as the two cousins share a platform.

The High Load Mode pumps the tires to 40 PSI or more in order to handle more weight. As expected, there are multiple off-road modes that range between 20 and 26 PSI depending on mode. There “Recovery Mode” lowers it to 17 PSI, which is the most useful for heavily loose sand or gravel terrain.

This system integrates with ABS and stability control, and together, they allow each other to tailor to the needs of drivers during vastly different driving scenarios. The stability control module can communicate with the tire inflation module to prevent excessive oversteering or understeering, which is only one of the possible examples.

Both the oddest and the most interesting feature the new Land Rover is set to have is a panorama camper roof on top. A German roof supplier listed the development of it for this new vehicle. This would certainly make it distinctive and unique among the competition! 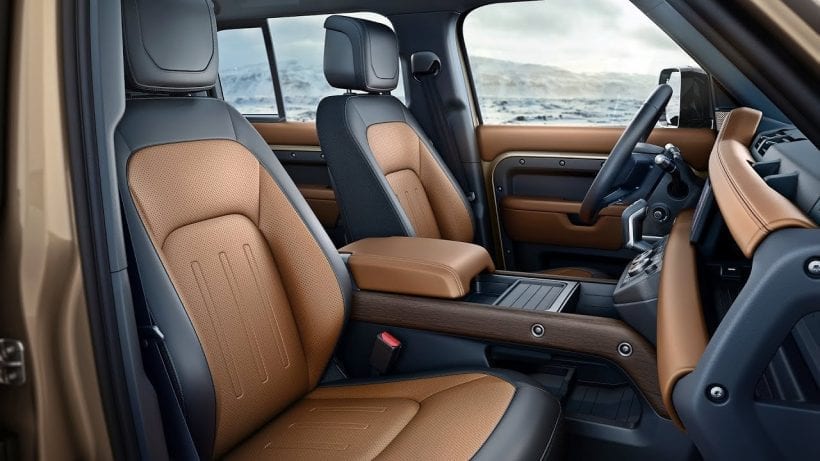 Let us now talk about the inside of the new Defender model. A brand new instrument panel is present inside, which is also the first one built completely in-house by the Jaguar Land Rover company. It was co-developed with a unit also intended for the next generation Jaguar XJ. Except this, the Defender will also have a gesture recognition camera by Aptiv, with features like the latest iDrive system the newest BMW 7-Series uses.

New exterior cameras are there as well. In the front of the cabin, the car has been treated with the new Bosch Generation 3 front facing camera. This optical device has the next-generation advanced driver assistance system, the first service based control system by Jaguar Land Rover. One representative had to say the following about it:

“Much as I’d love to unlock the keys to the kingdom, as you probably already assumed, we aren’t able to comment on much of the specifics of the program for the next generation Defender. I can confirm that the program is progressing well and, as you may have seen, has reached an exciting stage of its development with the first camouflaged prototypes hitting the streets recently. More news will be subject to a future announcement.”

Furthermore, the latest version of their infotainment system, Pivi Pro, comes with a 10-inch screen, smartphone app integration, and a new and more responsive touchscreen. The 12.3-inch digital instrument panel is a standard feature with all Defenders.

The second generation ‘activity key’ also exists, which is the wrist device that allows the car owners to leave the main key in the vehicle. This new version is water-resistant and has an LCD watch.

Regarding the space, five- and six-seat version are available. The 110s offer 1,075 liters of luggage space with the second row available, and north of 2,300 liters when it is folded. The seven-seat edition has 231 liters when the third row is up, and 900 liters when folded. This climbs to 2,223 with only the front seats available for use. 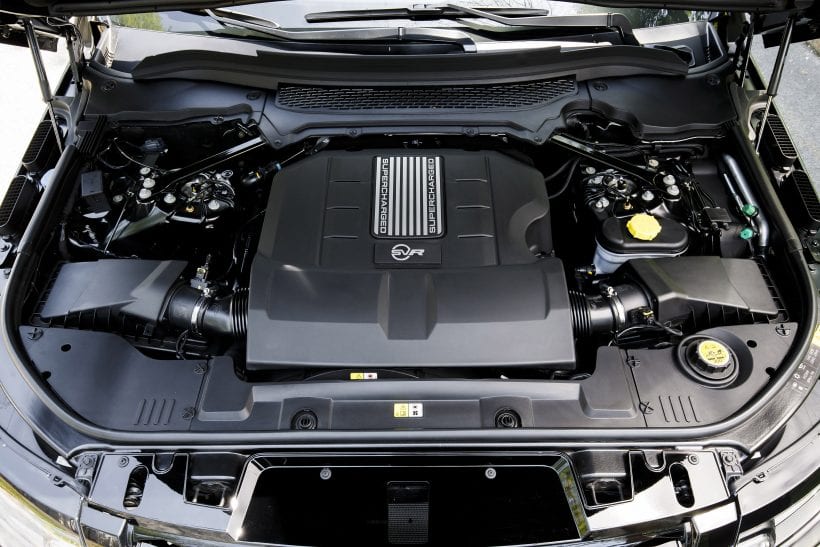 By switching to the new architecture, Land Rover was able to fit most of their existing engines into the Defender. The initial lineup includes two petrol engines, one mild-hybrid tech, and two diesels.

First off, there is the P300 four-cylinder turbo petrol that produces 296 horsepower, enough to go from zero to 62mph in 8.1 seconds, while emitting 227g/km of CO2.

Both diesels are four-cylinder units. The D200 has 197 horsepower and offers the 0 to 62 mph run in 9.9 seconds, while the more powerful D240 produces 237 horsepower and is faster by 0.8 seconds. Both have the NEDC-equivalent CO2 emissions of 199g/km, and a very official fuel economy of 37.2mpg.

The P400 mixes the straight-six turbocharged and supercharged petrol motor, which results in a 395 horsepower. This is a belt-integrated starter motor that works with a 48-volt lithium-ion battery, resulting in the fastest model in the range. The 0-62mph time is only 6.4 seconds, while returning 29.4mpg and emitting 220g/km of CO2.

The Defender Standard costs $50,925, the Defender S is $54,375, the SE is $63,275, followed by the Defender HSE at $69,375. To finish things off, there are the Defender First Edition at $69,675, and the range-topping Defender X at $81,295. There are tons of different customization options that can be added to any of these trims, including the Explore Pack, Cold Climate Pack, Convenience Pack, Towing Pack, Storage Pack, and so on. If you want all packs present with your Defender X, the final cost climbs to $103,133.