Home
Car parts
Can You Drive Your Car if Your Catalytic Converter is Stolen? 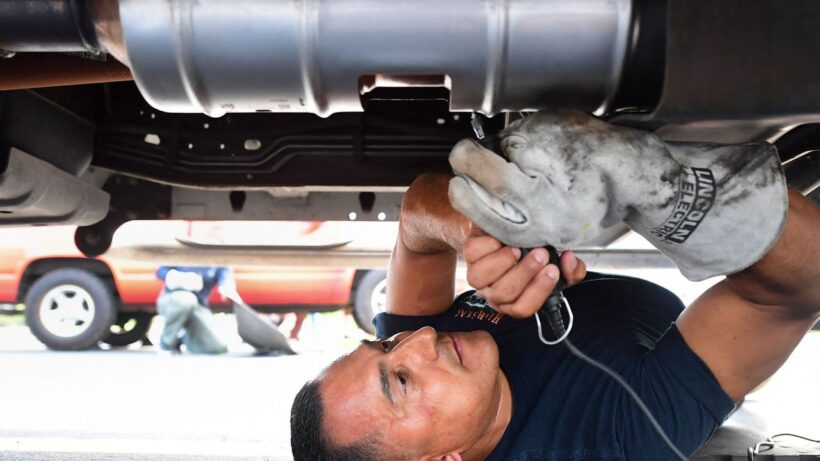 Treating the vehicle in the best possible fashion is something that many people love to do. We tend to develop a relationship with vehicles since we spend a lot of time inside them. It doesn’t matter if we are commuting to work, or when driving is a key component of the business processes we commit to every day.

That’s why we don’t enjoy it when something bad happens to our cars, right? Practically no other occurrence can be as frustrating as this one, you will certainly agree with that. One of the things that can happen, no matter how secure your vehicle is, is that some parts can get stolen by a thief.

Even though it may seem strange for someone to steal parts like the catalytic converter, it can easily happen. Now, we would like to provide you with an insight into what you can expect if this theft happens.

Without further ado, let’s take a look at the most significant points.

What is a Catalytic Converter? We don’t believe that too many drivers out there don’t know what a catalytic converter is. We are not talking about a new part. It is a part of all the vehicles out there. The trick is, that you cannot notice them unless you want to see them. Therefore, it is easy to overlook them.

The purpose of the catalytic converter is to help with changing all the chemical substances that are released by the vehicle. Among many of them, you will find chemicals like hydrocarbons, carbon monoxide, and nitric oxide. Basically, this part converts them into something that’s not as dangerous, like water vapor.

For it to be successful in this process, it needs to be made of certain materials, like platinum or palladium. As you can presume, we are talking about precious metals that tend to have a significantly high price. Therefore, you shouldn’t be surprised why someone may be interested in stealing it.

Why are These Being Stolen? As we’ve stated, catalytic converters are made of valuable materials, which makes them a good chance for someone to earn quick money, without too much effort. For example, there’s proof that the palladium-made converter was sold for almost $2.5k in one situation, which is an impressive sum.

However, this is not the only motivation for stealing these. We are not sure that people understand how easy it is to steal one of these. The whole procedure is getting under the vehicle and using a reciprocating saw to cut the part from the undercarriage. The thief doesn’t need to hijack the car before it.

Not to mention that there’s no identification number. Consequently, you cannot trace it at all. It disappearing is not something the owner can find about. The only thing you can do is to prevent this occurrence from happening.

Can You Drive Without It?

It needs to be said that driving without this part is possible. At the same time, this is not something we would describe as an enjoyable ride. Why is that? Well, the vehicle will release a lot of noise and caustic smoke. Both of these will harm the environment, which nobody wants to happen.

We can see that many voices claim that driving without this part is not something that doesn’t cause any problems. However, when we see how many chemicals are released in the process and are not treated properly, then we don’t believe that these voices are saying the truth.

To be precise, it is possible to drive without it if your vehicle has an engine that is up to 50HP. No matter what’s the case, you would need to change the exhaust almost every year due to the damage caused by these gasses. So, you can see that not having this part is not a cost-effective solution.

Signs that Catalytic Converter is Stolen 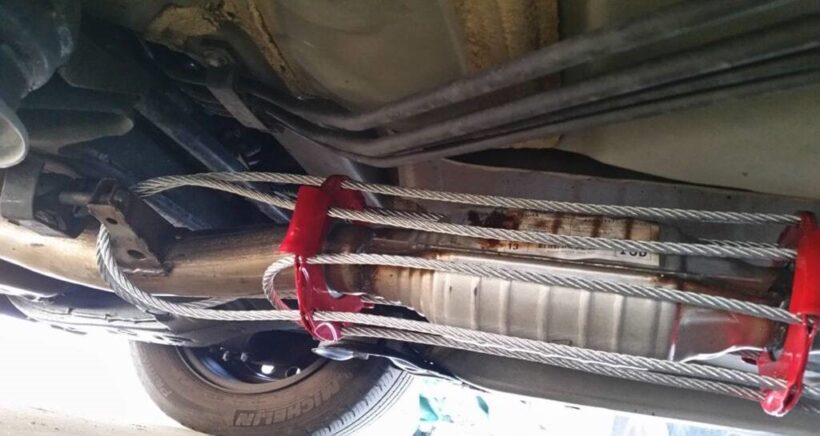 Now, let’s take a look at some signs that your car lacks this part.

The first and most obvious sign that there’s something wrong is an open pipe. Those who are responsible for this theft will not put anything to mask their wrongdoing. When you see an open exhaust pipe, there’s no doubt that you have faced a theft, and you need to do something about it.

Those who are familiar with the smell of the gasses coming out from the car’s exhaust can notice that the smell is somewhat different. It means that the chemicals released from the exhaust are much more dangerous both for humans and the whole environment. When you see an open pipe, you should inspect the car’s bottom.

In some cars, there are engine lights that are turning on whenever there’s no catalytic converter or when it doesn’t function as it should. We are sure that you can find it in all modern vehicles out there. Even if your vehicle doesn’t have it, you can easily purchase it. It is not a hefty investment.

When there’s no catalytic converter, the driver will certainly hear some loud noises coming from the engine. Whenever you turn the car on, you will hear an unpleasant noise, which is higher and way more unpleasant than the noises you are used to. It is a clear sign something is wrong with it.

The reason why this sign is important is that thieves will not replace it with anything that can prevent it from happening. While many problems are indicated by this, experienced mechanics will tell you that there’s a specific noise that points out this is the case.

Driving a car without a catalytic converter is possible, but it is not something that we would recommend. There are numerous reasons for that. In this guide of ours, you can take a look at all the relevant information regarding this occurrence, including signs that this is the problem. We’re sure you will find it both interesting and informative.