Mercedes is a top luxury brand that produces exquisite vehicles. Not only do their vehicles meet all standards of quality and performance, but they are built to perfection in every other way. But some aftermarket companies feel otherwise.

It’s not hard to find performance-based companies that want to make a fast car go even faster. One example is Brabus, which tunes Mercedes vehicles and makes them more impressive than before. Their recent project is the Brabus 800 Mercedes – AMG GLS 63.

If you are a petrolhead, you will know that Mercedes – AMG vehicles are already extremely fast. To make such a vehicle run quicker is something insane that only Brabus can attempt. Moreover, Brabus have not touched a sedan or a hatchback for that purpose. They have chosen the GLS 63, which is a performance SUV built to perfection, or so it seemed before Brabus had their hands on one.

Transformation of Mercedes by Brabus to Brabus 800-AMG GLS 63 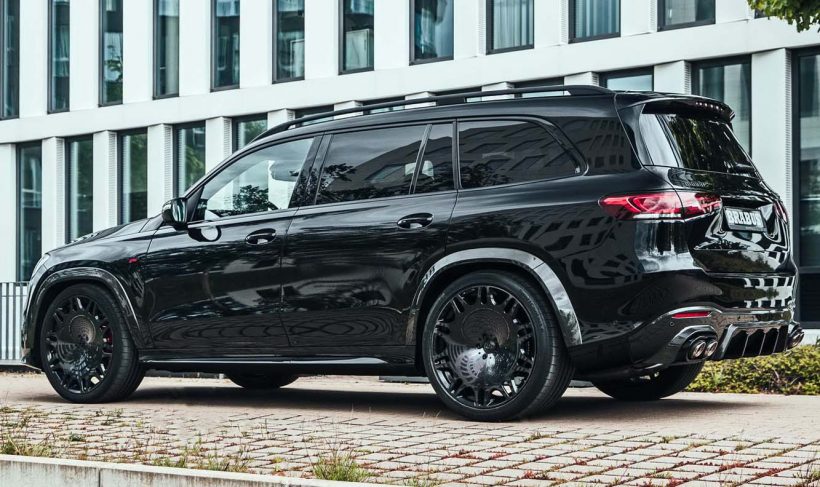 Transformations have been evident in the car manufacturing industry, where changes have often been made to vehicles to enhance speed and performance. Brabus has been one of the tuners who have usually established themselves to revise and improve Mercedes-Benz vehicles.

Brabus 800-AMG GLS 63 have been outstanding because of the application of some essential transformations that have made the car enhanced through the application of magnificent upgrades, which has improved the performance of the vehicle that it has sparked a lot of recognition as an outstanding SUV since upgrades have not been a challenge for Brabus.

You can tell the Brabus 800 apart in a crowd of Mercedes vehicles. That’s because their performance-tuned SUV adorns Brabus-special badging with a huge Brabus logo replacing the Mercedes three-spoked star. They also add two red stripes on the grille for an added sporty effect and also to make the GLS 63 stand apart. Furthermore, Brabus added some carbon fibre bodywork to improve the overall handling and aesthetic of the SUV.

Other than that, air suspension was added to lower the GLS 63 by about 25 mm. Imagine that with blacked-out 24-inch massive-sized tyres. You can’t get better than that when it comes to looks.

The Brabus 800-AMG GLS 63 has been designed with bodywork made of carbon fiber that showcases an immense transformation and kits for improving the handling and performance. The air suspensions have been upgraded to boost the performance by lowering its height, boosting stability while reducing drag. Huge 24-inch tires wrapped in monoblock forged alloys add a luxurious touch as you relax inside on leather seats covered in best upgrades from PowerXtra B4OS-800 company which helps exalt this SUV’s abilities even more. 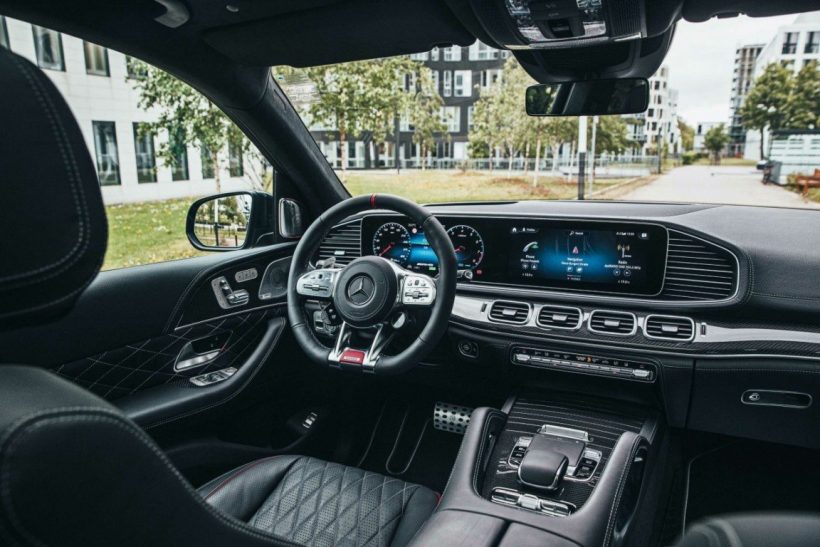 The Mercedes GLS 63 is a full-sized SUV with three-row seats. In other words, it is a family vehicle with a tinge of adventure inside. Brabus made full use of the spacious cabin and bathed it in leather wherever possible. he steering wheel, the seats, the dashboard, and all other nooks and crannies get top-quality leather. The interior cabin exudes luxury to such an extent that Mercedes itself would be impressed.

The real reason why people buy or even consider Brabus-tuned vehicles is because of performance. The German aftermarket performance company adds its unique PowerXtra B40S-800 package to the Mercedes – AMG GLS 63. As a result, the SUV receives 789 horsepower and 1000 Nm of torque. All of that performance enables the Brabus-tuned GLS 63 to accelerate from 0-60 mph in an extremely impressive 3.8 seconds.

Keep in mind, we are talking about a three-row SUV that weighs well over a few tons. There are plenty of hatchbacks that go slower than this. In fact, many sports cars come nowhere near the 4-second mark. And here we have a full-sized SUV managing a seriously splendid acceleration time.

The SUV tuning has showcased outstanding performances and improvements in the organization and the outlook of the Brabus 800-AMG GLS 63. The aftermarket tuning results in an immense output of 588 kilowatts (789 horsepower) and 1000 Newton meters (737 pound-feet) of torque supplied to all the wheels. The SUV can sprint in 100 kilometers per hour (0.62 miles per hour) in just 3.8 seconds which showcases that the SUV has a high acceleration in both a mile and a quarter-mile range compared to other SUVs. Brabus has transformed SUVs to enhance their performance, which improves the level of outcome.

After reading all that, you’ll probably be thinking if all that performance and aesthetics comes at a price. Yes, it does, and it comes at a pretty hefty price indeed. You can expect to pay €308,968 for one. It’s up to you to decide if the Brabus 800 Mercedes – AMG GLS 63 deserves that much.

The BRABUS (we pronounce it Bra-bus) 800 hp is a fantastic mix of power, elegance, and sound. The innovative technology built in combined with the intense power output makes this vehicle one for the books. With BRABUS’s patented valve-controlled sports exhaust, you’ll have absolutely no trouble getting those heads turning!

Mercedes-Benz is an all-around advantageous car that can suit a wide variety of buyers, and Mercteil allows you to customize it with parts that are both high quality and aesthetically pleasing. You need to be careful though – things like tires often change depending on the occasion. If you’re looking for something more practical, such as luggage racks or scuff plates, then make sure to contact one of the friendly staff members. After all, they know what’s best for their cars.