Home
Tips
Birds and Bugs: The Threat They Pose to Your Paint Job 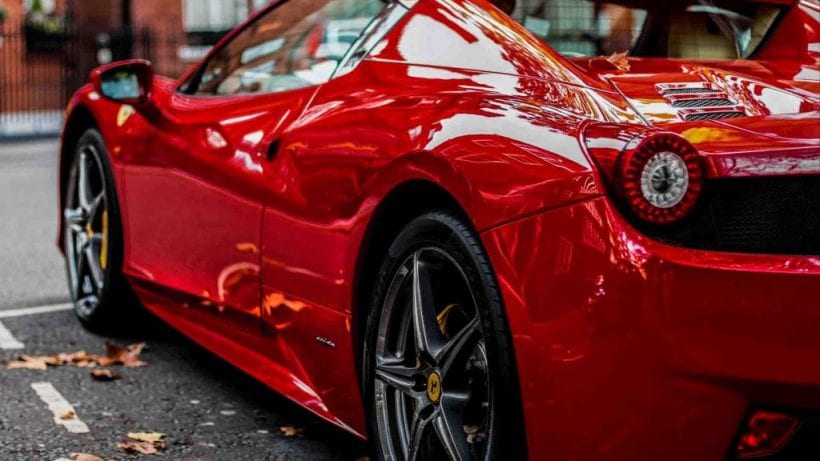 Every year, car owners spend heaps of time and money maintaining their cars. They’ll splurge on synthetic oil. They’ll buy the best tires they can. They’ll go into the garage on the slimmest pretext, even just for a tune-up or to check the alignment. If this sounds like you, congratulations! You’re a dedicated car owner.

But you’re not a totally dedicated car owner unless you’re also taking care of one more thing: protecting your car’s paint job from birds and bugs.

That’s because bird droppings and bug splatter present unique challenges to your car’s paint job, and present a danger greater than normal wear, tear, and weathering. If not addressed quickly and effectively, these two threats can seriously damage your finish. And they can also leave your car’s surfaces even more vulnerable to corrosion.

Less Paint Than You Think

That’s because, as the website Pests.org points out, there’s remarkably little paint on the body of the average car. Most cars do get three layers of paint during the manufacturing process, but the first two of those layers, usually consisting of a layer of primer and a layer of color, are each thinner than a human hair. Manufacturers then add a third layer, a layer of paint without color that’s used to protect the paint underneath from weather, damage, and ultraviolet rays. This layer, usually called the clear coat, is thicker than the others, but it’s still really, really thin, and that means bird droppings and bug splatter can do some serious damage to it. 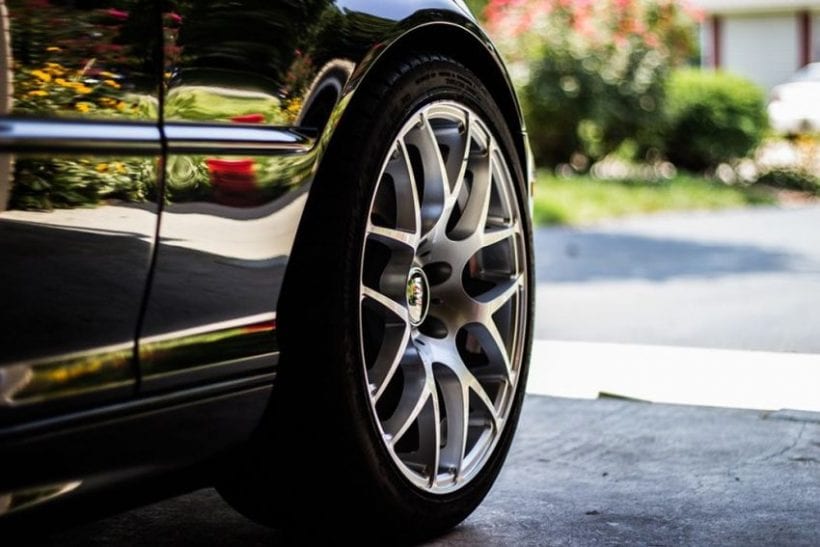 How Bird Poop Damages Your Car

As it happens, the types of paints that car manufacturers use the most are chosen for being able to resist heat—the heat of the sun, the heat of the road, and the heat of the car’s engine. But just because the paint resists heat doesn’t mean that heat has no effect. Especially when combined, those sources of heat can make the clear coat softer and more pliable.

And that’s where bird droppings become a problem. As the British car-care company Autoglym found out when they tested in a lab, all those sources of heat harden the bird droppings on your car just as the paint is softening. Take away the heat, and gradually the paint will harden again, but this time it re-forms around the crusted droppings, marrying the clear coat even after the droppings get washed away.

And that’s not the only damage that bird droppings can cause. Even if bird droppings aren’t acidic enough in themselves to etch into your paint very quickly if the poop is there as your paint expands and contracts, it can get into the clear coat and stay there even after the rest of a deposit gets washed off. And once inside a layer of paint, those acidic droppings have plenty of time to do damage and further degrade your car’s appearance. 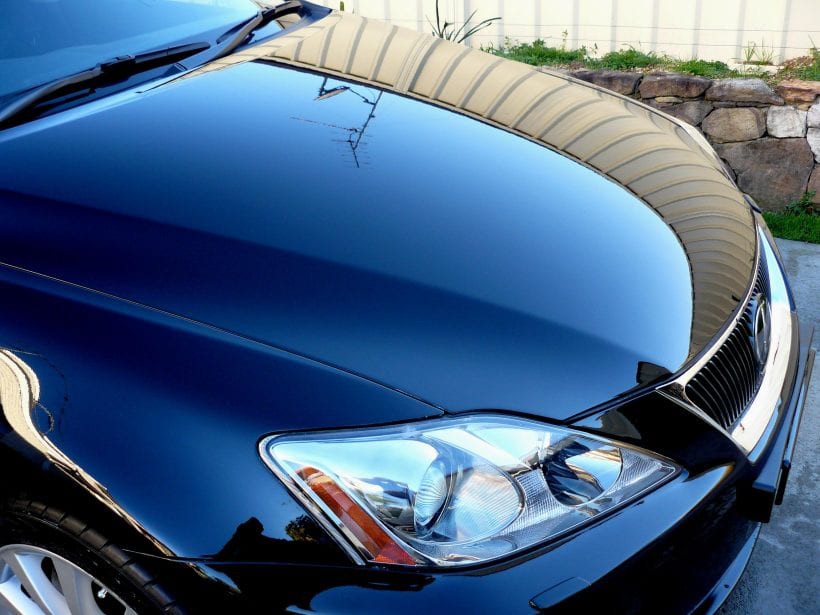 Just as with your other maintenance routines, prevention is the best medicine when it comes to bird droppings. You can apply, or have a detailer apply, car wax or some of the other products available to protect the clear coat and the layers of paint underneath. Professional detailers will be able to recommend the types of protectants that work best for your finish and your car. Be careful, though: a bad wax job can actually scratch your finish, so consider having a professional take it on.

You can also keep your car clean, removing any deposits you see as soon as you spot them. Here again you want to be careful: clearing caked-on bird deposits from your car’s finish is another opportunity to scratch the very thing you’re trying to protect, which is another reason to turn to a professional, especially if there are a lot of deposits, or they’ve been on the car for a long time.

Finally, if the worst happens, a detailer or body shop can use spot polish to even out places where the clear coat has gotten warped. Some of these methods are expensive and or time-consuming, of course, but they’re better than having to get a new paint job!

As bad as bird droppings can be for your car’s paint, there’s an even bigger threat out there: the residue left when bugs hit a moving car. This also may seem hard to believe, but as tiny as insects are, they’re still big compared to the ultra-thin layers of paint that cover your car’s body. Still, an insect is a fragile thing, and your car is made of metal, right? True, but as it turns out, flying insects—the houseflies, lovebugs, gnats, mosquitoes, and other creatures that adhere to your car during the summer—have a secret weapon.

That secret weapon is their blood, or, rather the stuff that sloshes around in an insect’s insides. This kind-of blood is already acidic, though only mildly so. When it splatters on a car and gets exposed to air and sunlight, however, it becomes even more acidic. Researchers have shown, for example, that the fluids released when a lovebug (a large flying insect common in the southern United States) hits a car becomes more and more concentrated as the hours go by.

Still, can naturally produce a chemical strong enough to threaten your paint job? Actually, it can. In the early ’90s, acid rain frequently damaged car finishes, especially if it was left to evaporate and become more concentrated. In a similar fashion, any acidic substance, from diet soda to lemon juice, that’s left in contact with your clear coat can mar your finish and even put the underlying paint layer at risk. 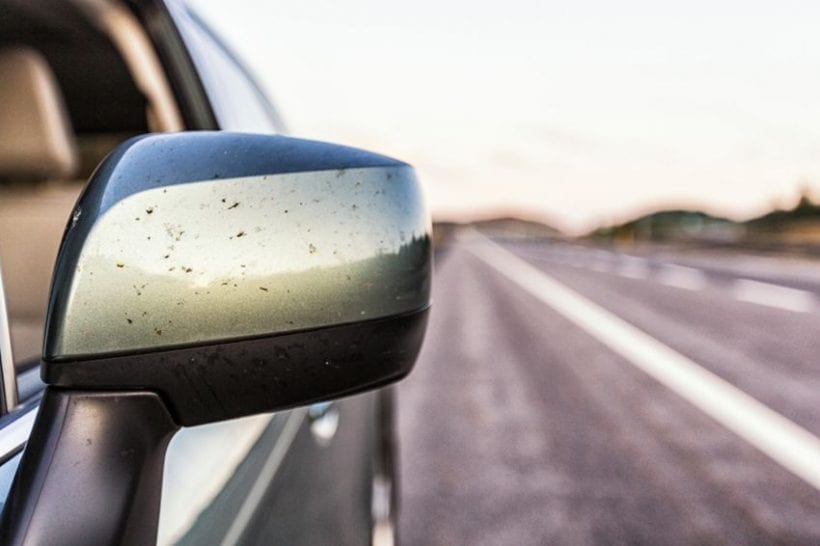 And bug juice can get very acidic. For example, water—H20—is made up of an atom of oxygen combined with two hydrogen atoms. But even in a single drop of water, those atoms don’t always stick together: hydrogen ions (that is, hydrogen atoms without electrons, giving them a positive charge) and hydroxide ions (one hydrogen and one oxygen atom combined, along with all their electrons, which gives them a negative charge) are constantly floating free, heading off in all directions to react with whatever is floating in the water along with them. This natural reactivity is what makes water the universal solvent.

When you put them in water, acids release hydrogen ions and create a supercharged solvent. We measure how powerful a solvent is using the pH scale, where for every whole number you get away from water—which has a pH of 7—the solvent gets ten times stronger. A pH of 5 is 100 times stronger, and a pH of 4, which is the pH of day-old bug residue, is about 1000 times more of a solvent than water. It’s on a par with tomato juice, and if someone offered to pour tomato juice over your hood, would you let them?

Leaving that acid on your car’s finish can cause the same sort of discoloration and marring that you get from bird droppings, but that isn’t the only problem you can encounter. When chemicals meant to prevent UV damage get mixed into the clear coat, they tend to rise, and they end up on the surface of that layer. With enough bug damage and enough time, your UV protection can grow weaker, leading to damage to your car’s actual paint layer. 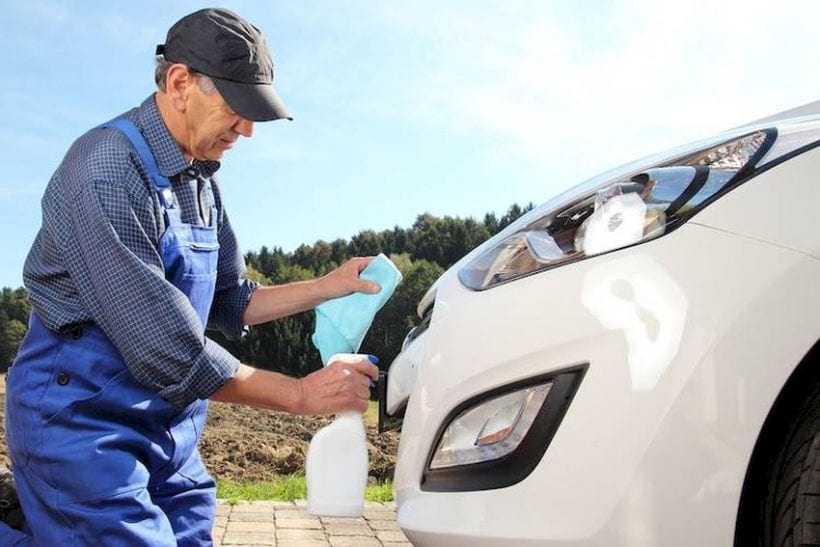 Just as with bird droppings, you’re going to want to focus on prevention in order to avoid damaging your clear coat. Again, car wax and other protectants, whether applied in your driveway or at the detailer’s, give you an extra barrier so you’ll have time to clean bug splatter off your car before it starts to react with your finish.

Depending on the type of car you own (this might not look right on your Z4, after all) you could also consider getting a bug shield, the plastic barrier that sits at the front of your hood and either takes the hit from flying insects or deflects them into your car’s slipstream.

If you do get tagged by a kamikaze bug, time is of the essence: you’ll want to get it off within a day or two. Prevention also means removing bugs once they hit, though as with bird droppings, you want to make sure you remove insect carcasses without scratching your paint.

Finally, as with bird deposits, you may find that you have waited too long, and that bug goop has left pitting or marring of your clear coat. A professional waxing may be able to conceal the damage done, but if the damage is extensive enough, or left long enough, you may need to have your entire car refinished.

If you’re a conscientious car owner, you’re almost certainly taking care to maintain your car’s engine, drive train, and wheels. But there’s no excuse for failing to protect your car’s finish as well. Because while you may have trouble believing that birds and insects can give you car trouble, the damage they do to your car’s appearance may diminish its resale value at the very least, and possibly interfere with your enjoyment. And regardless of the kind of car you drive, who wants that?