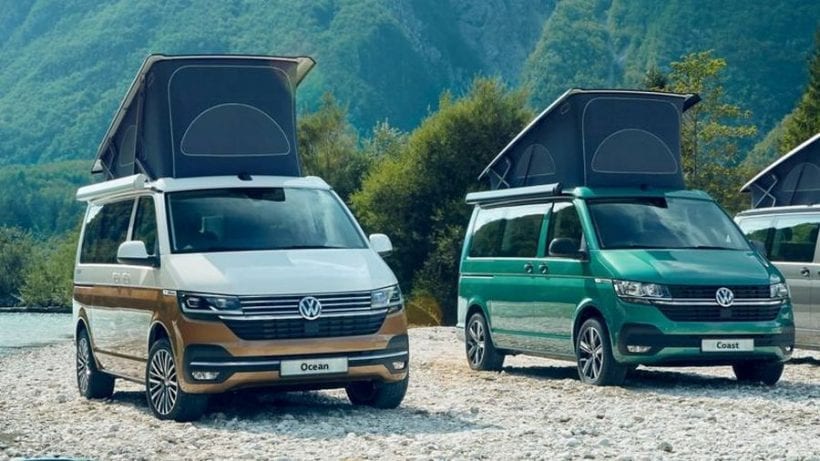 No-one can deny that VW makes probably the best campervans in the world. Recent bad publicity aside, the California T6 is a legend in its own lunchtime; and that lunch is inevitably served on the wide-open road from the in-built fridge; salad not provided.

Joking aside, the new T6.1 version is better. Surprisingly so, some might say, even to the extent that owners of the previous T6 model might actually want to trade up. With even more quality fixtures and fittings, this new van has a lot to say for itself. 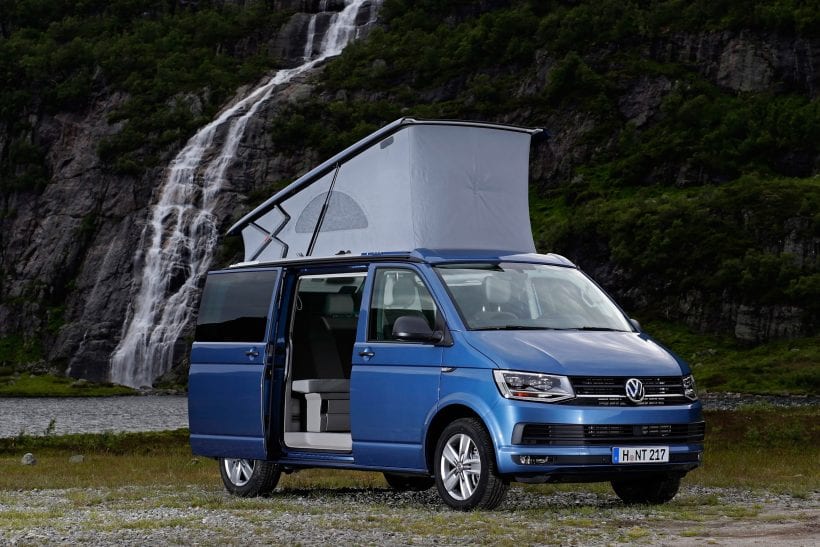 Sleep or not to sleep that is the question?

I don’t know about you but if I’m tired I’m not fun to be around, surprisingly. So the fact that the new T6 has a new coil-sprung top bed – that’s the bed in the roof to you and me – is amazing. So comfy and warm! What’s more, the auxiliary heater and the electro-hydraulic roof-raising mechanism are two of the many things now controlled by a new touchscreen panel mounted above the rear-view mirror. Hooray for the sleep experts at VW!

Right now I’m loving the camping panel and its new features, including operation of the interior lights and the fridge before you’ve left the driver’s seat. The camping mode setting can deactivate the exterior lights so you don’t disturb your fellow campers when stumbling back from the pub by spotlighting the entire site when you hit the unlock button.

Even more excitingly, the same panel can display a set of digital levels to help you park the campervan in the most spill-proof table-top manner possible – so no more nights dreaming you’re balancing on a cliff edge with Michael Cane, no? Just me then.

Which brings me to the roof design. The darker grey material finish that forms the sides of the pop-up roof area is a UV screen and cuts down on unwanted sunlight. Even more, zips are included in the design, which means there’s a fully opening section across the entire front if you want to stargaze or sunbath semi-naked without frightening the locals.

If you are sleeping up in the gods, the new camping panel has a sunrise alarm setting that will gradually bring up the interior lights to wake you gently, just like one of those fancy daylight alarm clocks. Let’s not pretend that any of us get to sleep in after the dawn chorus. All that country air, noisy cockerels, and mooing cows is enough to drive anyone straight back to town but that’s all part of the charm. 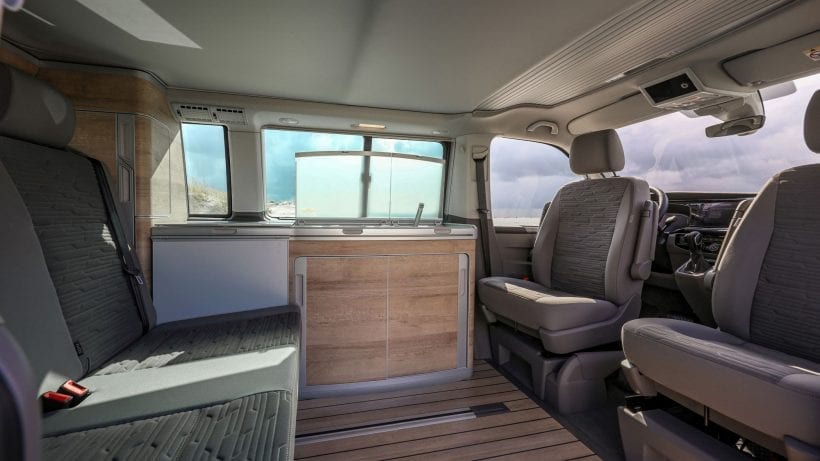 The downstairs bed and seat configuration have more of a lounge feel, which makes it cozy and less VW Transporter like. New upholstery design is also less van-like and more en-vogue with a Danish hygge feel, I would go as far as to say classy.

There are some noticeable detail improvements, however, including new aluminum handles for the cupboards, push-button release mechanisms for the work surfaces that cover the cooker, cool box and sink, and the floor is now all wood-style paneling. Loads of extra storage throughout to include dash-top bins and cupholders.

Whats more tell me who doesn’t love outdoor seats tucked up your tailgate? A table built into the sliding door is vital and the ceiling can be raised once the roof is up so you can comfortably stand in the cabin and wave at your neighbors. 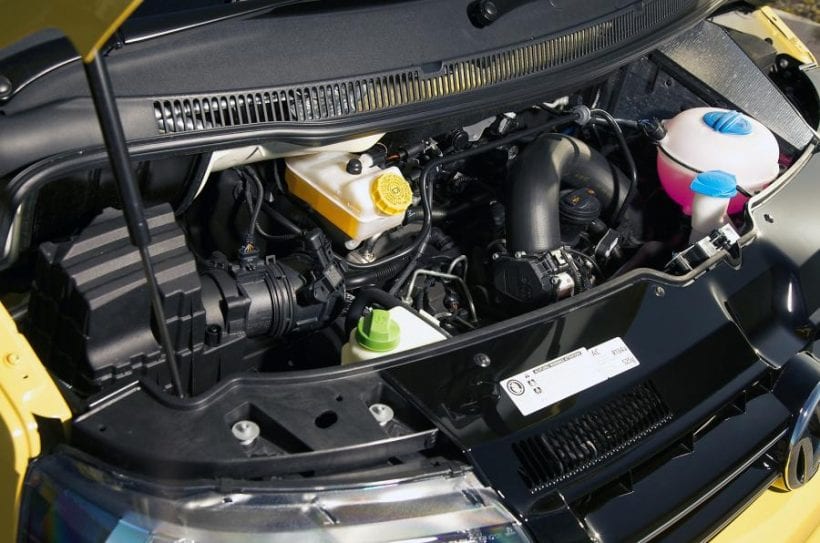 To be honest, only the VW geeks really care about the mechanics, all we really want to know is that it’s not going break down and leave you stranded up a maintain with no signal and no pub insight. When something not only looks like a house and can function as one, we need it to be foolproof, which is why you probably hired it in the first place. All you need to know is you’re covered.

Much like the 1996 world cup, you can trust the Germans to win and VW gets this right every time. There aren’t any radical changes here versus the previous model, although VW has switched the T6.1 over to electro-mechanical power steering and refined the suspension for a smoother drive, which means no numb bum on longer journeys.

What else? EPAS (Electronic Protocols Application Software) means more driver assistance is available, including crosswind assist, active lane-keeping and automatic parking, this comes in handy when measuring a two-meter distance.

All T6.1s are available with VW’s latest MIB3 information systems, which come with wireless Apple CarPlay and Android Auto, voice control and on-board Wi-Fi. Some even have sat-nav and digital dials. If your child is anything like mine you’ll spend the entire time re-setting the sat-nav and shouting “leave the dials alone, you pest”

Comfort and convenience as standard

When you hire a VW T6 California Campervan from Call Campervan Hire you will be pleased to know it comes fully loaded with a 240v hot water system. Useful 12 v and 240 v sockets, the 12-volt system have a split charge unit 3 stage leisure battery charger and 110 amps of power.

A really great built-in gas supply by way of an underfloor bottle (LPG). My favourite by far is the solar panel – 100-watt solar panel fitted to the roof enables you to stay off-grid for 7 days without any hookup. Now you’re talking my language.

Now more than ever a UK holiday is looking favorite and remains that way for some time. So right now more than ever happy memories are what will get you through the tough times. Think open road, think fish and chips on the beach, think lazy days and star-filled nights, and no more putting your towel on the sunbed and remember campers the world cup is every four years.