The Renault-owned brand has continued to tease us with content regarding its new model the Alpine A120, and we might see it debut soon. The vehicle has been spotted in heavy camouflage roaming the streets of Paris at nighttime. This appears to be the final public test before the official introduction, which will happen soon, according to Alpine.

Earlier spy shots confirmed that the production model will bear much resemblance to the Alpine concepts on which it is based when it comes to design. Judging by these new photos, it is safe to say that the differences between the sketch and the actual product are minimal. One of the most important features a sports car must have is good aerodynamics and design plays a significant role in that, and not just in aesthetics. For instance, the diffuser placed in the rear bumper is there to enhance the airflow, and the aluminum platform will have an entirely flat floor for lower drag coefficient. 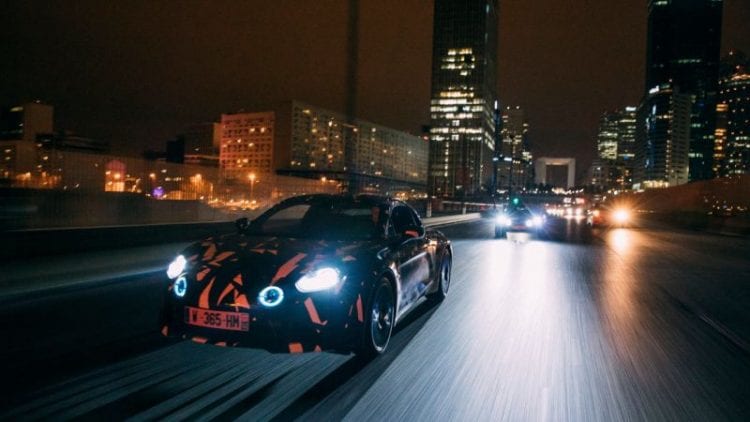 The carmaker devoted a lot of attention to weight reduction and even the seats are specially designed, and these body-hugging seats will be half in weight of those that it rivals sport. When all those special features are paired with the aerodynamics, it is bound to be faster. Two engine options are rumored to be in play for this model, and the first one is a 1.8-liter turbo while the second is a 2.0-liter unit also turbocharged. The vehicle will supposedly be able to reach 62 mph (100 kmp) from a standstill in 4.5 seconds.

If you find yourself interested in this sporty car and you think you can afford it, feel free to place an order. A special application offers early reservations for the Alpine A120 Premiere Edition, and the company will reportedly manufacture only 1,995 special edition vehicles. Alpine was founded in 1995, so the numbers of vehicles that will be produced is a symbolic figure. If you decide to buy it, you should expect it to be delivered by the end of 2017.