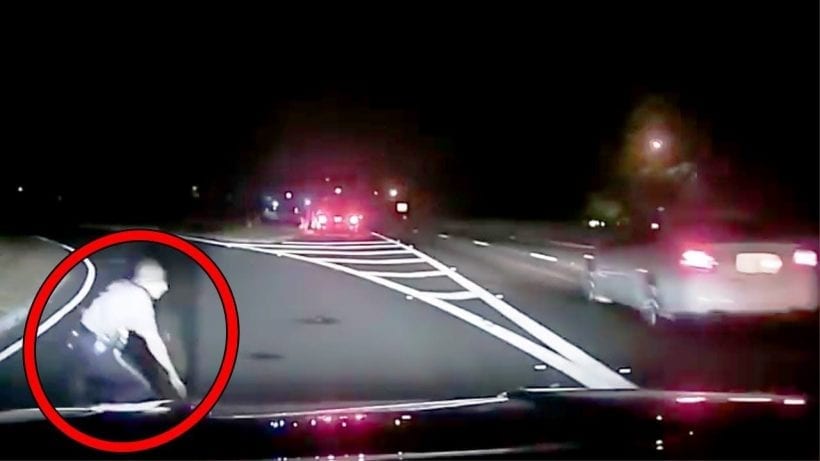 How does it work?  Well, car recorder dash cameras can record looping videos, which can provide strong evidence if an accident happens. Although dashboard cameras are made to enhance people’s security on the road, there are instances when they also offer some entertainment too. There are many interesting videos that you can find on the Internet, and some of them are recorded through dashboard cameras. We’ll look at some of the top videos caught on dash recorder cams in this article.

Sometimes, car owners unexpectedly find exciting videos that were caught in their dash cams. Most of these recorded moments are funny, while others are weird and creepy. If you want to find amazing moments on the road, then try to watch these videos from Youtube:

1. Adorable Thiefs – In this footage, the officer is trying to get the attention of a dog by giving it some treats. He needs to catch the stray dog, so he keeps feeding the dog. He left for a while to get something from his car when another dog came by. Before the officer gets back, the two dogs ran with his pack of treats.

3. Deputy Nix’ Heroic Deed – This video shows the heroic deed of Deputy Jeremie Nix of the Marion County Sheriff’s Office situated in Florida. He was driving when someone suddenly flagged him down. The driver caught his attention and asked for his help because her baby was completely unresponsive. The officer has performed first aid measures before rushing the baby to the hospital. With the quick work of Deputy Nix, he was able to keep the baby and help his mom. Hero action caught on a car recorder!

4. Green Meteor – This dashcam video was recorded on the 30th of March, 2019 – sometime between 11:35 pm and 11:55 pm. The driver was on his way home on Newberry Road, University Avenue in Gainesville, Florida when he saw a massive green meteor. Watch this footage and be amazed by how this massive green light falls from the sky – it is epic.

5. Kid Riding His One-Wheel Mountain Bike – In this footage, you’ll hear a couple laughing hilariously. What were they laughing at? As you zoom in the video, you’ll notice a kid riding his mountain bike with one wheel. Although several people did this kind of act, that moment was an amusing one for the couple. Watch this video and try not to chuckle in their contagious laughter.

6. Meteorite in Russia – Have you seen a meteor? If not, then you might find one in your dashcam footage like this one in the video. A bright meteorite was seen flying in the sky in the southern part of the Krasnoyarsk region of Russia. It appeared around 6:46 pm. According to the people who have seen it, the meteor was shining brightly, making it painful for the naked eyes to see. The flying meteor was a rare phenomenon. The driver was fortunate enough to record it with his dashboard camera.

7. Pedestrian Bird – Pedestrians are made to allow people to cross a street. In this video, you’ll see a car stopped before a pedestrian crossing to let a little bird cross the street. This video lasted for less than a minute, but it can make you smile once you see the adorable bird.

8. Thoughtful Act – The grandma on this video found it hard to cross the streets. As she was strolling, a driver gets out of his car to help the older woman. What a thoughtful act! If you also see older people, you can also help them if they are trying to cross the streets. Know that they are not strong enough to walk fast, so giving them a hand could mean a lot to these people. Besides, crossing the road could be too risky for them.

9. Tom and Jerry – Tom and Jerry is a famous cartoon show that features a never-ending rivalry between Tom, the cat, and Jerry, the mouse. If you love this show, you will surely find this video interesting. This footage was caught on the dashcam by a police officer in Minnesota. He was driving at night when he saw the real-life Tom and Jerry running through the street. The cat was chasing the mouse in the middle of the road, causing the police officer to make a stop.

Having a car recorder camera is exciting, especially if you are documenting your trips. What makes it more enjoyable is when it has unexpectedly documented amazing acts in front of your vehicle. If you still don’t have a dashcam, then consider having one because it provides several benefits. When buying one, make sure that it has a looping feature so that you don’t have to delete unnecessary files manually. Also, consider dashboard cameras with g-sensors that can detect if your car gets hit even when you are not there. Apart from these features, try to look for a camera that can record explicit videos even at night. If you have already purchased this fascinating device, make sure that it is placed in the right position where it can record videos with an excellent framing view.

Sometimes, car owners find unexpected events as they review their dashcam videos. Plenty of these videos have been shared through social networking sites to make you laugh out loud. Try to watch all the videos listed above and see which one is the most exciting video for you.

To find out more about car recorder cameras, click here.