Although the 2019 Range Rover Evoque is not near production form, it is obvious that it will be wider. The crossover was introduced almost six years ago, and it is not a big surprise to see the Evoque being tested in public. The second generation will have some changes as we can see in the photos, and the automaker might redesign the vehicle a bit more on its way towards production.

This compact SUV that has been spied appears to be a bit wider than the first-generation Evoque. This might mean that some important hardware features are going to be changed for the 2019 version. Judging by the black plastic extensions on the rear wheel arches, this one will feature a wider rear track. The vehicle has a higher ride which might mean that the company wants to make changes for the model’s second installment.

Furthermore, as we are getting wider stance and body, we expect to see extra space inside for passengers. It appears that the wheelbase is not longer than the one of the previous generation, the new underpinning carries along better space optimization and potentially more room, especially in the back. 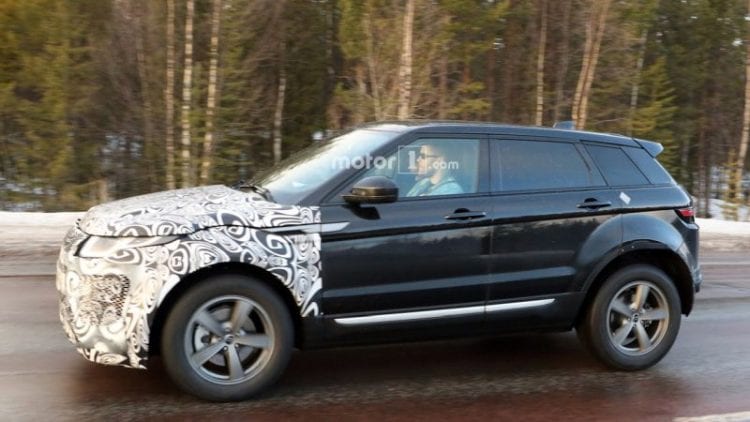 Another detail that draws our attention is a yellow high-voltage sticker which suggests that this might be a hybrid prototype. Although the lack of exhaust tips might imply the introduction of an EV, the license plate was checked with UK’s Driver and Vehicle Licensing Agency (DVLA) and the vehicle seems to have a turbodiesel engine.

Autocar reported last September that Land Rover plans to introduce a mild hybrid powertrain which pairs a 48 V electrical system with a three-cylinder diesel engine that is helped by the electrically-powered turbocharger. We can only assume that the Evoque might have this piece of equipment and setup.

The production version of Evoque will probably have one of the latest JLR’s Ingenium engines. Previously we witnessed a new 2.0-liter turbocharged gasoline unit which is good for either 200 or 250 horsepower and which could be found in the Jaguar XE sedan. The XE sedan is now also offered with a new 2.0-liter turbodiesel engine that is good for 240 hp and 500 Nm. The 2019 Range Rover Evoque will be introduced in the second half of 2018 and will probably feature these four-cylinder powertrains.