One and a half month into the new year and more than a few Hyundai vehicles have been spotted while conducting tests. The last one in line is 2019 Hyundai Santa Fe which was caught on its first outing in the snow. Like a dog that sees snow for the first time, new SUV from renewed Japanese car-maker was dancing and prancing across snow covered land.

What you can see in the photos is an early prototype which has few pieces that are already production ready, but most parts of the SUV are covered in heavy camouflage. The prototype spied presents larger of the two Santa Fe versions, the three-row one while the two-row Sport model will be out at a later date. The new design on 2019 Hyundai Santa Fe looks like an evolution of current model with few notable upgrades.

The first thing that we noticed on spy shots are the mirrors which are now positioned on the doors instead of on the A-pillars. Moving to the lower front segment, the headlights are now split where the upper ones serve as daytime running lights while the below are the main projectors. The grille will adopt new Hyundai design which is something that will be characteristic for all future vehicles starting from 2018 Elantra GT. As far as the cabin goes, we can’t say much because spy photos didn’t provide us with enough close-up shots of the interior. 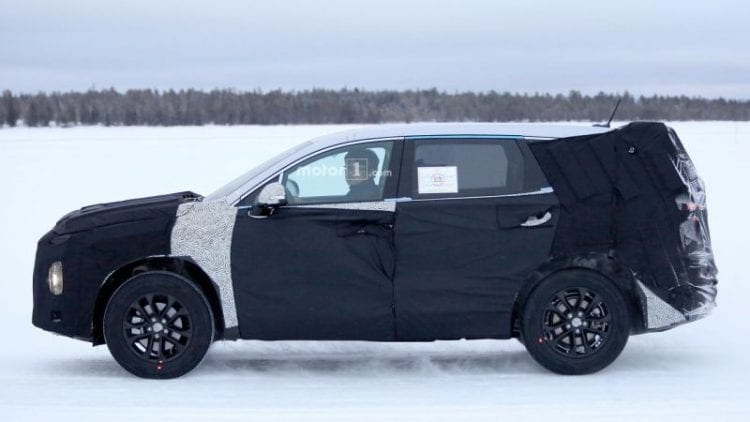 Under the hood, probably nothing will change, at least not much. You can expect for 2019 Hyundai Santa Fe to have naturally aspirated 3.3-liter V-6 which can produce 290 hp and 252 lb-ft of torque. This unit comes with six-speed automatic transmission, and it can run 0-60 in 7.1 seconds with a maximum speed of 128 mph. As far the Sport version is concerned it will come with one of Hyundai’s in-line four mills.

Some of the most famous Santa Fe rivals include 2019 Ford Explorer, 2018 Honda Pilot, Kia Sorrento, and 2017 Toyota Highlander. As far as the 2019 Santa Fe goes by the time it arrives, it’s going to have Volkswagen Atlas, and Subaru Tribeca successor added to the list of its rivals. 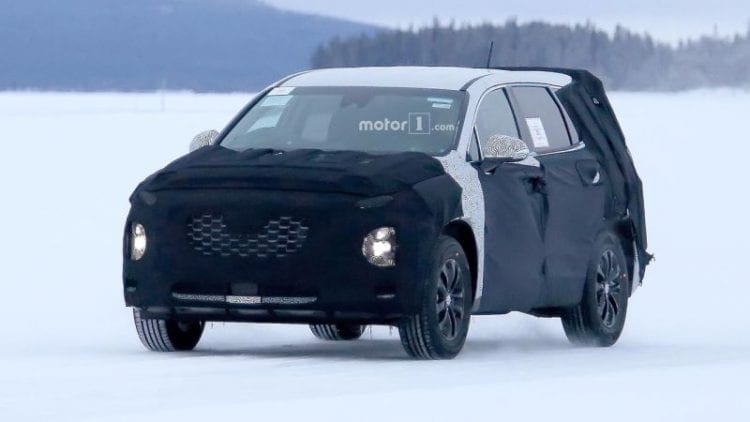 The release, to the disappointment of all of us, is not going to be scheduled for this year. Early 2018 sounds like a real possibility but the time is just not right to guess the exact date. The vehicle will come as 2019 MY.

The current model of Santa Fe has a base MSRP of $31,600 which is very affordable for the SUV of this size and ability. Expect for a future version to bring a small increase in price because of subtle changes that will improve the new Santa Fe.