GM should be pleased with its full-size truck. Current Chevy Silverado was introduced in 2013 as the third generation, and for 2016 it received a mid-life refresh. Sales are more than good, and together with GMC twin Sierra, they reached almost 800,000 units last year, while nearly three-quarters of that belong to Silverado.

To any of us that would be more than fine, but apparently not for GM’s financial department. For them, they see that numbers are down 4.3 percent compared to 2015, while Ford F-Series went up by 5.2 percent in 2016, and while that seems insignificant in the game of such a huge annual numbers, to them, it is more than a world. Anyway, Silverado does use some dated configuration, and we should expect some changes. That is the reason why camouflaged test mule of what is future 2019 Chevrolet Silverado 1500 is already spotted testing.

We cannot discuss this in details as the new model is completely covered and there is almost nothing to see at all. The only visible thing is the fact that side mirrors settled themselves on the upper line of the doors instead of window corners. Or maybe it’s a different story here. 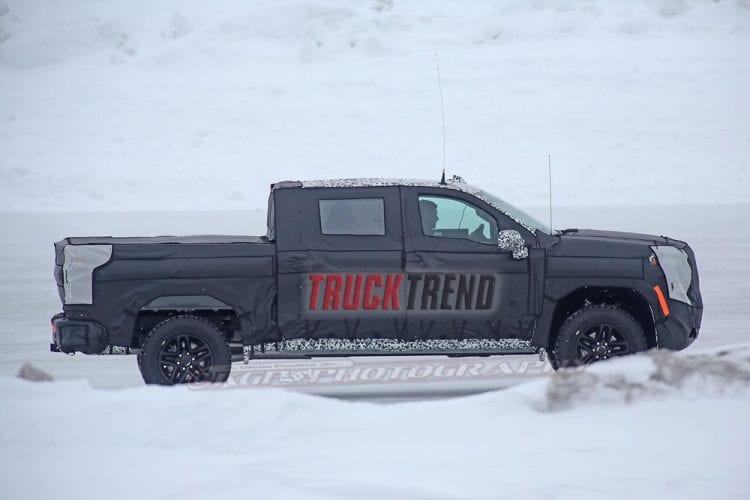 Camo that’s covering side windows has a dropping line on front doors, and if that is not just a decoy, new Silverado could have a similar solution as the main rival from Ford. In that case, mirrors stay at the window corners while windows get expanded toward the ground in their part closer to the hood. For the rear side of the vehicle, we can only see double exhaust tips, while everything else remains completely hidden.

We should expect new platform, which would additionally reduce weight, although Silverado was more than good on that field already. The steel frame will be offered with few changes, but some panels might switch to aluminum, apart from the bed of course, as that was its main marketing bullet during attacks on F-Series. 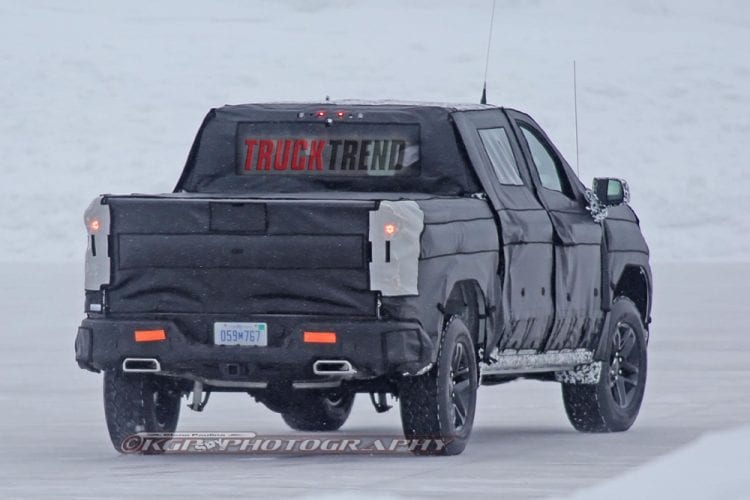 Anyway, even if partial, that move could pose as a kind of betray as Chevy put lots of effort to convince us of all bad sides of aluminum. It certainly stays with the body on frame chassis and the solid rear axle, together with optional 4WD apart from standard RWD.

Under the bonnet, we will see the revision of current 4.3-liter V6 that delivers 285 hp and 305 lb-ft and introduction of the new turbocharged I4 engine. The most popular offer will stay V8 which comes in two configurations, 5.3-liter with 355 hp and 383 lb-ft and top of the line 6.2-liter boosting 420 hp and 460 lb-ft of torque. We should expect power raise from all of them and improved fuel efficiency along with that. V6 and I4 should come with 8-speed automatic transmission, while V8s could be mated with optional and newly developed 10-speed one.

2019 Chevrolet Silverado 1500 should make its debut during Detroit Auto Show in January 2018 as 2019 model. We are still one year far from there as current show in Detroit just recently ended, but in the meantime, current Silverado is not a thing to be avoided at all. Price shouldn’t fluctuate much, and it should remain close to the current starting price tag of $29,000 and go all the way to $60,000 as it is now. If current Chevy sells that good, we could only imagine how it will be when new architecture arrives with a bunch of latest tech and upgrades. It might not be able to overcome F-Series sales but second place stays reserved for it, as we believe so, and that isn’t bad either.