These photos were the first time that the new member of the BMW family has been spotted. The i8 Spyder will hit the showrooms next year as a 2019 model. The company will introduce the updated version of the i8 coupe this year, after which the i8 Spyder will have its debut. Unlike the Spyder, the i8 coupe has already been seen, and now we can see a clear difference between the two body styles. The vehicle does not feature the sloping rear windshield that the coupe has and instead, it has a small, vertical rear window along with a new engine cover. On the sides of the engine cover sit new cowls that are connected to the individual rear wings.

Since the model probably has a panel that needs to be removed manually, one could say that the Spyder is less a convertible and more of a targa. The i8 Spyder concept dates back to 2012 when the vehicle had a two-piece roof panel. 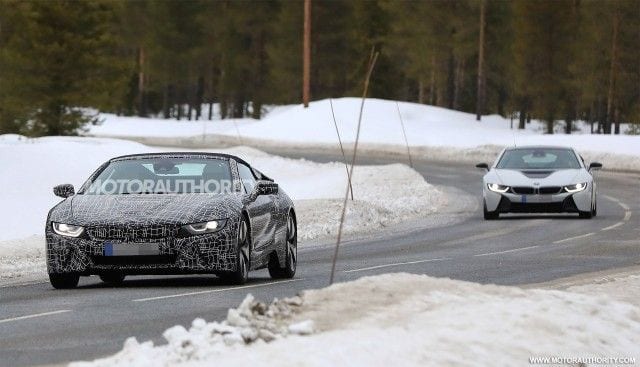 Just like the updated i8 coupe, the new 2019 BMW i8 Spyder will continue to feature a turbocharged 1.5-litre inline-3, electric motor combo, and 6-speed automatic gearbox. The new model is expected to be more powerful which means that it will exceed the current 362 hp and 420 lb-ft of torque. The current vehicle has a 15-mile rating, and battery capacity will probably be improved to gain better results. Just a little suggestion, if you are looking for a performance hybrid, Acura’s NSX has 573 hp and 476 lb-ft of torque.

Inside the cabin will most likely feature new technology, some of which might come from BMW’s i8-based i Future Interaction concept that had gesture control and multiple digital displays. The concept was introduced at the 2016 Consumer Electronics Show.