Tiguan has positioned itself quite well in Europe. Actually, it is lagging in European sales only to Nissan’s Qashqai, making it an instant hit when it ventured into the showrooms in 2007. Figures in the US were on the contrary quite modest so far, but the new generation has just arrived with an intention to turn the tides. The second generation was revealed last year in Europe and bunch of it is already on the streets, while in the US we have just welcomed new 2018 VW Tiguan on Detroit Auto Show.

But it is not same as the model revealed in Frankfurt Motor Show in 2016, it is long wheelbase version of it, and it is the only choice in the US, while in Europe it joins regular version and gets additional moniker- Allspace. 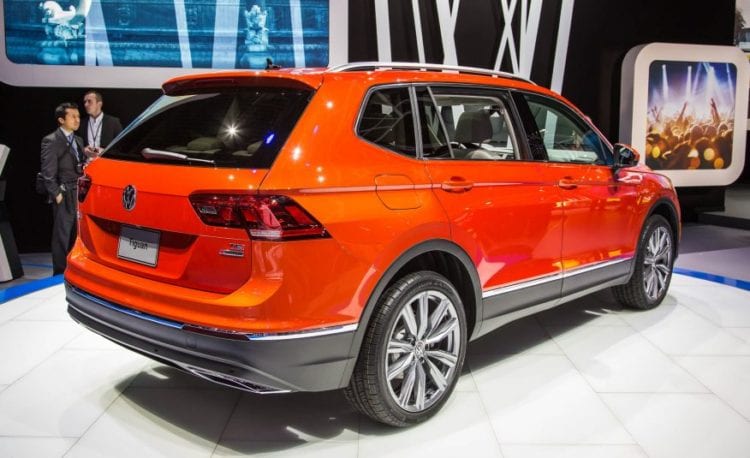 It looks same as already available Tiguan, just with few extra inches of metal positioned right after back doors. Styling is very Germanic, cold and serious, although mentioned seriousness transcends to the special type of business like elegance, which simply does not allow extravagance. If we look in details, rear end is quite unimaginative while front fascia received much more attention and comes decorated with wide, chromed grille merged with headlights.

Cabin follows the same recipe. It lacks swooping lines and peculiar curves, but it astonishes with quality and ergonomy. Lack of fussiness breads simplicity but in the perfectionist manner. This is not sort of cabin that you could fall in love while gazing at the pictures, but you won’t be able to erase it from your mind once you drove in it. It is a smart and mature approach, not trying to “wow” you with bling on the first sight, but later it grows much deeper under your skin than the ones from rivals offer.

LWB, in this case, counts on 109.9 inches, which allows 57% more of cargo space and an optional third row of seating. Mentioned additional sitting row is actually suitable exclusively for children and getting in and out could result in the quite tangling process, although the possibility of sliding the second row by 7 inches makes things a bit more tolerable.

There is only one option in the US, 2.0-liter turbocharged TSI engine, making 184 horsepower and 221 pound-feet of torque paired with eight-speed automatic transmission. Other engines from European offer are not on the list and actually it doesn’t matter as this is its top offer from petrol powered units. In Europe, there is a stronger unit, diesel one, with additional 10 hp, but it isn’t supported by better acceleration figures on the paper.

Mentioned US version reaches 60 mph in 7.7 seconds, and it is capable of fantastic 32 mpg combined of fuel efficiency, so we don’t see anyone complaining about it in the future. The base offer comes with FWD while 4Motion AWD comes as an option.

It offers a decent number of it, including sunroof, powered tailgate with the foot opening availability and most importantly Volkswagen Digital Cockpit which you can configure to your preferences in a very similar manner as with Audi’s Virtual Cockpit. Infotainment system support Car-Net and App-Connect services, same as Apple CarPlay and Android Auto, with an addition of MirrorLink phone technology.

2018 VW Tiguan is presumably going to have better results in the US than the outgoing model. It has extra inches, it offers the third row in compact SUV segment, which is still a rarity, and its cabin is significantly more refined than before, giving you traces of premium without the premium price. Couple that with proper in-car technology, efficient engine, and it seems that you get quite a lot for your money.