In 2001 Toyota decided to offer more mainstream full-size SUV in the States, and that brought us Sequoia, which seats below more upscale Land Cruiser in the lineup. The model was far from success and second generation is the worst seller in its class for years, so something has to be done. The current generation was introduced in 2007, and after a decade on the market, we should welcome 2018 Toyota Sequoia, which is not what it was supposed to become.

THIS IS A JOKE!

Apparently, it seems so. Sequoia is decade-old SUV virtually unchanged through the years and all that it gets for 2018 it’s just slight nip and tuck. Ford Expedition is indeed one year older, but it used same Chicago Auto Show to present totally new generation, unlike the Japanese representative here, and even Nissan introduced a new generation of Armada last year. It is also true that Infiniti QX80 is seven years old, but it’s still three years behind it, and it got its odd-ish looks and lavish cabin to play on. We are not even going into the matter of volume sellers as Tahoe and Yukon. 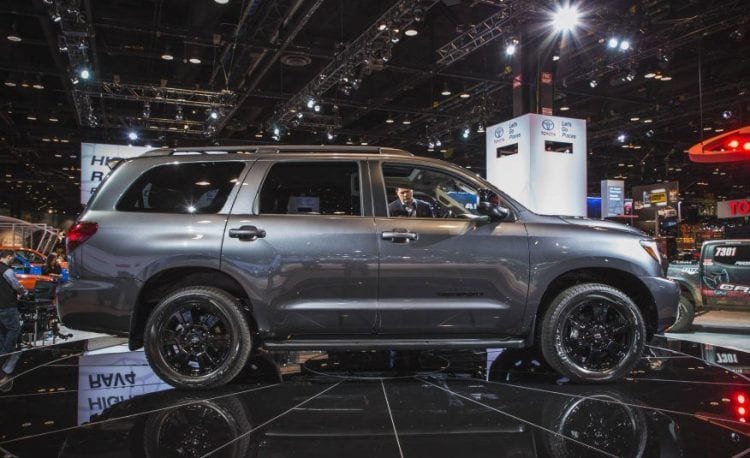 Headlights are reshaped and feature full LED technology along with fog lights, the grille has slightly different shape and changed design of slats which come in several variations depending on trim. At the rear, taillights retained the same shape, while it can be optionally smoked within special version and that should be it. There are still three trim levels including SR5, Limited and Platinum, later two are recognizable by chromed bumper accents, although there are new three exterior colors: Midnight Black Metallic, Shoreline Blue Pearl, and Toasted Walnut Pearl bringing the total number to 8 available on the list.

The interior brings new instrument cluster and display within it, along with the lower center console, but you won’t notice that anyway. There is nothing new under the hood, still 5.7-liter V-8, delivering same 381 horsepower and 401 lb-ft of torque mated to six-speed automatic transmission, available with RWD or 4WD. One good novelty is that Sequoia is finally included in Toyota’s efforts to raise safety bar within the brand, so now it comes standard with adaptive cruise control capable of pedestrian detection, lane-departure alert, and automatic high-beams.

Sadly no. This is not TRD Pro off-road beast as in the case of 4Runner and Tacoma, this is TRD Sport. That implies some styling tweaks as black mirrors, tuned grille and bumper, 20-inch black wheels, dimmed taillights and some TRD Sport badges. The nonvisible change would include Bilstein dampers and TRD anti-roll bars, which are hardly going to make this massive SUV fun in the corners considering that everything else stayed the same.

2018 Toyota Sequoia SHOULD YOU AVOID IT?

Yes. 2018 Toyota Sequoia is a classic example of too little too late. It was the worst seller in the class, and it is unbelievable far from changing that. Since Expedition is brand new, the only thing that’s old in the segment, besides it obviously, is the QX80, but we already stated that it got some charming bits to play on.

Looks were never stronger part of Sequoia, and this refresh hasn’t changed that at all, while cabin appears more like one from a pickup truck, in these times, compared to the rivals that actually were doing something in the last decade. This is just a vain attempt from Japanese to extract some extra penny from already signed off model while refusing to put some decent work in it. If it happens that you got over $46k and also having thoughts about full-size SUV, this is not the thing to go for.