Toyota has a lot to brag about when Rav4 model is concerned. It was the first crossover in the US and Europe when introduced in 1994, in the modern sense of the word of course, and the current version is selling better than ever in the US, while in Europe it obviously suffered from ever-increasing competition. A current generation brought dismissal with the dull and anemic design of previous one, and that clearly paid out and to spice things up, the Japanese company has just chosen Chicago Auto Show to reveal to the world 2018 Toyota RAV4 Adventure.

It isn’t something as TRD Pro, to make the things clear from the beginning. While SUVs lacking crossover part of it, such as 4Runner and just revealed updated Sequoia, together with Tacoma and also just updated Tundra trucks, do feature special TRD treatment, more gentle side of Toyota’s SUV lineup will have to wait.

And anyway, does TRD Pro goes with unibody chassis and AWD lacking lockers, low range case and other stuff? Maybe not, and whether is it going to happen or not we don’t know, but in the meantime, you have 2018 Toyota RAV4 Adventure to be amused with. 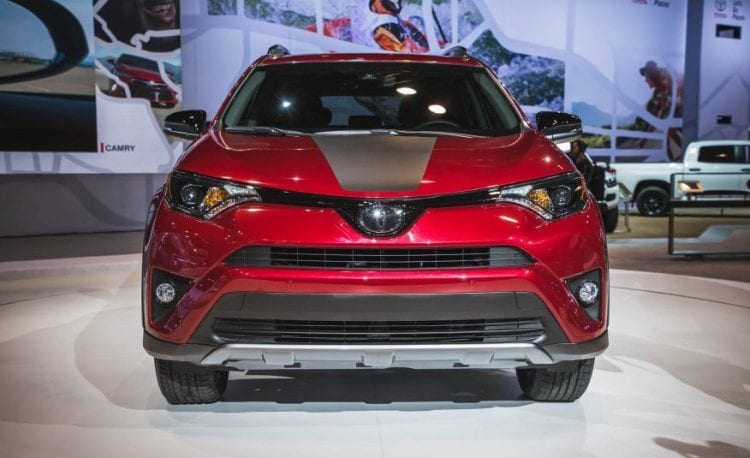 2018 Toyota RAV4 Adventure IS THIS DECEIT?

No. Nobody from Toyota ever said that Adventure could pull the things in nature same as proper SUV with or without TRD logos. This version is a primarily visual delicacy and a good one for that sake. It will be priced in the middle of the lineup, so bellow $30k when it goes on sale in September this year, and for that, you get quite cool looking Rav4 that screams “I can do everything” while plain Joe wouldn’t know that it can’t.

What’s the problem with that? Take even worse the Allroad, Crosstreck, Cross Country stuff, that also visually promise, but not quite deliver and nobody is bothered with that. If you want rugged SUV looks, but couldn’t stand any attack on your comfort and you actually never had the heart to plunge your transportation into the dirty side of nature, this could be it.

WHAT DO YOU GET THEN?

Actually, you do even get some better versatility with it. In this case, Tow Prep package comes as standard, which brings revised radiators and coolers for oil and transmission fluid, making it capable of towing 3,500 pounds in AWD version, which is more than doubled from the regular model, and falling short just below Jeep Cherokee in the class.

Though the main thing that you get with it is hardcore off-road makeup. That means blacked out headlights, mirrors and roof rails, black striped hood, bigger plastic moldings, raised clearance and attractive black 18-inch alloys. Cabin got its share too, with leather wrapped shift knob, special door sills, and all-wheater floor mats.

Everything else stays the same, 2.5-liter I4 under the hood with 176 hp taking decent 8.3 seconds to 60 mph, FWD with limited slip diff or all-time AWD, adaptive cruise control as standard, while interesting goodies to check on options list would be trailer sway control and hill-start assist going great with available better towing capabilities.