The Subaru BRZ tS debuted in Japan during 2015, and one year later the Japanese manufacturer decided to register tS trademark name in the US. If the Ebisu-based company wanted to protect the name, it would protect it at the same time both in the land of the rising sun and in the America. This way when we saw that they registered the name in the US one year later, it gave us a clear signal that they are preparing the ground for the North American launch. We are not trying to get anybody’s hopes up too high, but 2018 Subaru BRZ tS could be first of many tS models to arrive in coming years.

If you are wondering what is the difference between regular BRZ and tS we are here to name a few. Most of the upgrades are happening on the chassis. The suspension is tuned and is similar to those on the STI models from Subaru lineup. It has black 18-inch aluminum wheels with 225/40ZR Michelin tires. On the safe side, there are 17-inch Brembo (4-pot up front, and 2-pot at the back) ventilated disc brakes.

The exterior is also more aggressive than on regular BRZ, and it features tS ornaments on few visible spots on the chassis. The aggression is even more accented by a large front under-spoiler, black mirrors, black roof antenna and fender garnish. In its homeland, the tS is available in a following set of colors: Sunrise Yellow, WR Blue Pearl, Crystal White Pearl and Crystal Black Silica. 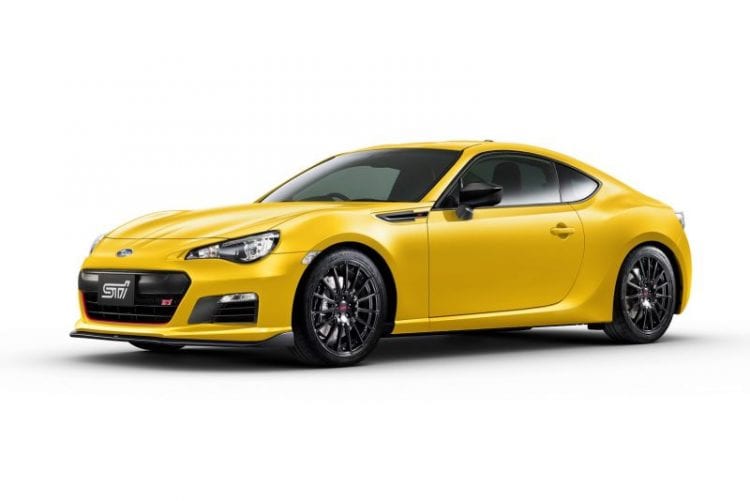 Under the hood, this model has the same engine as regular BRZ, with the only difference being a Sound Creator designed by MAHLE Filter Systems. This system serves to make the driving experience in tS better, and to create a better in-cabin feel. The unit mentioned above is a 2.0-liter boxer engine delivering 200 hp and 151 lb-ft of torque. The power is transferred to the rear wheels via an either six-speed manual or six-speed automatic transmission. With 2018 Subaru BRZ tS designated for US shores engine lineup might be enlarged.

Most of the speed fanatics would like for this model to come as soon as possible but the story of tS version has just begun, and there’s a lot of work left to be done. If there is any timeline for 2018 Subaru BRZ tS release, then it would go from test mules, after which we would hear the companies official confirmation of this model to the final version being introduced. So, with our fingers crossed, we are hoping that this vehicle is going to hit the dealerships in the first months of 2018.