Renault Sport division dates back to 1976 when the merger between Alpine and Gordini happened. It missed its chance to meddle with the first generation of Megane, but not with the second. Megane II Renault Sport or RS, in short, featured a turbocharged 2.0-liter engine that delivered 225 hp, taking it to 60 mph in 6 seconds, which was quite vigorous at that time. Next generation bumped power to 250 hp, while the introduction of 265 Trophy edition further boosted that at obvious 265 hp. Trophy edition created lap record at Nurburgring for production FWD vehicles, which lasted for three years.

It was beaten by Seat Leon Cupra 280, causing Renault to develop 275 Trophy version and retake the title. So, Megane has the right to brag a bit with its RS versions, and while last year saw the introduction of the fourth generation of a regular hatch, we know that 2018 Renault Megane RS is soon to follow. 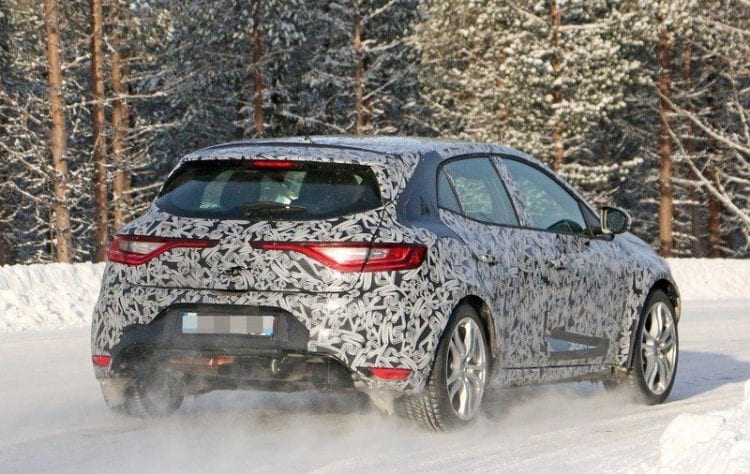 There are spy shots of, let’s say unusual Megane GT model, besides one showing masked mule being heavily tested. By the way, GT is a sportier version of the regular hatch, with the aggressive front bumper, meshed grille, double exhaust and rear diffuser, but with 165 hp delivered by the diesel engine or 205 hp from petrol one, it is actually far from a proper hot hatch.

That game would be played by our future RS model. Spy photos show 2018 Renault Megane RS, but we could spot some bits that actually point that something else is under the skin. First, there are hood pins, second wheel arches are trimmed to accommodate bigger wheels, and for the end, we see double center exhaust at the back, besides regular side openings from GT model.

Center exhaust is kind of signature thing of Megane RS versions, it was double one in the first generation, that went to a single wide rectangular one in second, and obviously we are back to double configuration with the new model. If you pay attention, you can even notice Brembo brake calipers, so there is no doubt what all this evolve to.

Renault is utilizing GT model for testing stuff under the skin, so don’t be confused as RS version will bring much more visual delights. Expect more aggressive fascia, larger air intakes, side skirts, a bigger spoiler at the rear, sportier diffuser, sport fenders and lower stance, among other stuff. On the inside, even sportier than current GT seats will take place, along with flat-bottomed steering wheel and inevitably some RS badges.

2018 Renault Megane RS UNDER THE SKIN

Hot hatches now play more around 300 hp boundary, Ford took it further with 350 hp, while German premium is playing another league around 400 hp currently. We don’t precisely know what Megane will bring to the table, but it must play around 300 hp figure. It shouldn’t be hard as 275 Trophy version had, well 275 hp, and French should definitely think about AWD as that front axle might become overburdened with all that power.

RS version will have its own special suspension treatment and besides manual, dual-clutch automatic optimized for sporty shifts will come as an option. We don’t have anything for sure yet, and when we do, we will let you know definitely and don’t worry as you won’t have to wait long as 2018 Renault Megane RS is set to debut this March in Geneva.