When Land Rover decided to change the tune with the third generation of Range Rover in 2002, it became purely luxury oriented, while hard-core off road stuff was left to Discovery and Defender. Not much time had passed before the story became wider and in 2005 mid-size Sport model entered the market. It was not over as in 2011 we got compact sized Evoque. In 2014 Freelander became Discovery Sport, and since Defender is out of the picture, for the time being, we have two lines of models: Range Rover and Discovery. Well, the lineup of this car maker is about to receive one more member, named 2018 Range Rover Velar, which just debuted.

WHERE DOES IT FIT?

We have compact-size Evoque and then mid-size Sport, so Velar will sit in between. It is the bigger side of compact SUV segment, same as Mercedes GLC is to GLA or BMW X3 to X1. It will be obviously larger than Evoque and quite more abundant in space, as that was not the shiny point of a smaller sibling.

When we gaze at the fascia, we see some similarities with latest Discovery, but Velar packs more than enough distinctions, it is Range Rover after all. It appears aggressive and highly posh at the same time. 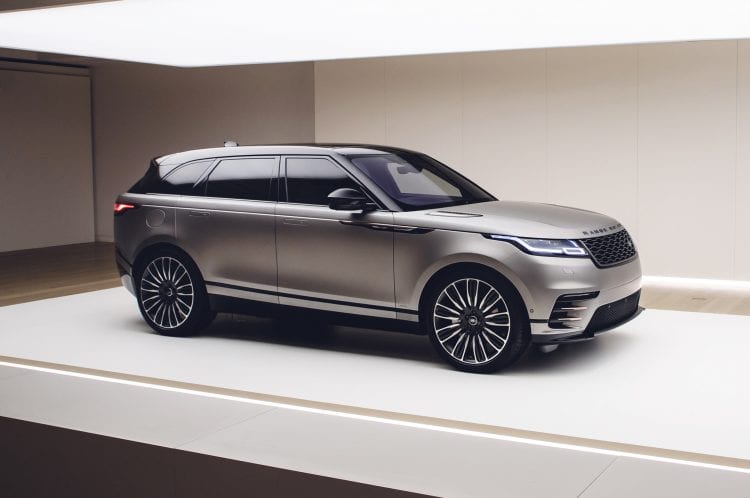 Aggressive part is covered by sharp slats at side intakes, meshed lower intake, honeycomb grille, while the posh side is enhanced by full LED headlights, invisible door handles, sloped roof, tail lights stretching all over the back, and optional contrast roof. We could sum up by stating that it is the most stylish thing in the segment by far.

Until the rest of the Range Rover range got its update on interiors, this would be the best cabin in the lineup, for sure. The British company raised the game in elegance and feel of prestige with deleting almost all buttons. The new thing is Touch Pro Duo infotainment system which has two 10-inch screens, upper as the regular one and lower replacing all buttons that were usually there to control climate, off-road modes, and similar. 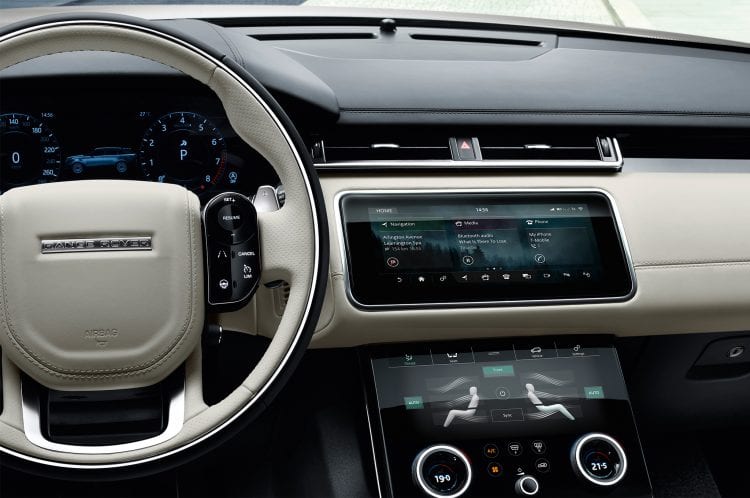 The top display can even tilt 30 degrees to improve visibility, while two knobs that survived have little screens on themselves also. Practicality was not left out, so boot can take 34.4 cubic feet of stuff, and you can opt for special upholstery for seats, which besides being fancy looking is made of sustainable materials.

Velar is under the skin basically Jaguar F-Pace. And there is nothing wrong about that, in fact, it is among the best that it can get in this segment. That means the same aluminum platform is in use, while drag coefficient is ultra low in its case with 0.32, or best ever in brand’s history. For a start, it will house turbocharged 2.0-liter I4 under the hood with 247 hp as a base. Diesel offer would be 2.0-liter I4 delivering not so great 180 hp, and the most powerful option is definitely petrol V6 boosting 380 hp. All engines are paired with 8-speed automatic, and you have AWD as standard. Ground clearance is 9.88 inches, with the fact that you can opt for air suspension, and it can tackle water up to 25.59 inches, so not quite Discovery but nicely done.

We have a thing going on here now. You see Evoque rival BMW X1, Mercedes GLA, Audi Q3, Infiniti QX30, and rest, but it is around ten grand more expensive, putting it in line with Merc GLC, BMW X3, Audi Q5 and Jaguar F-Pace. Nobody expected that 2018 Range Rover Velar is going to be identically priced as Evoque, so it is definitely not going to be in line with competition either. Base price is $50k, as again we have Range Rover around ten grand above most of the rivals. Macan was charging around 8 grand more giving best dynamics, so we’d guess Velar can ask its ten giving best style.