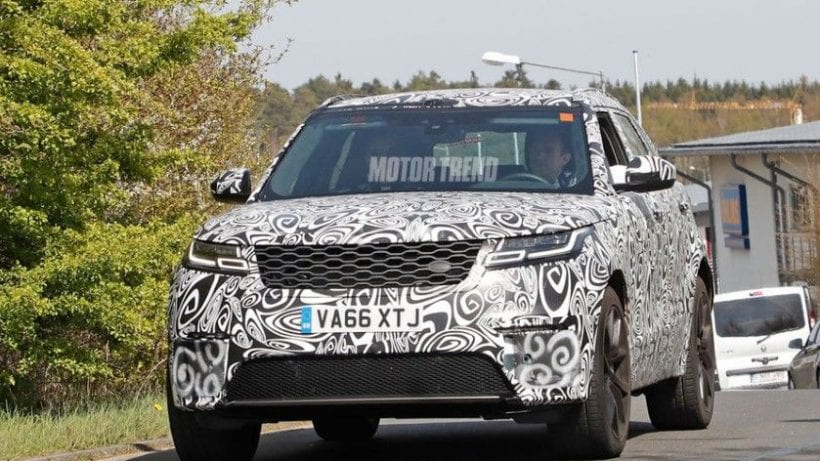 New Velar hasn’t even properly hit the dealer’s lots, and already we have spy shots of hottest possible version. When the second generation of Range Rover Sport debuted in 2013, we waited almost two years for SVR model, but as we see the 2018 Range Rover Velar SVR might follow much sooner after the regular version, probably already at the beginning of 2018.

If you have any confusion whether masked Velar on spy shots is actually future SVR version pay attention to the wheels. Just one glimpse at huge rotors and gigantic calipers make everything perfectly clear. In fact, it appears that we have 6-piston calipers at the front and 4-piston ones at the back, which is hardly needed in any “regular” mid-size SUV.

No information exists about the “under the hood” happenings, and it is not needed anyway since we know what could settle there. Jaguar Land Rover does have some intentions to turn to turbochargers in the future with its glorious V8s, but that is still under development, so supercharged 5.0-liter V8 delivering 550 hp and 502 lb-ft of torque should fit fine for now while being joined by revised 8-speed automatic gearbox.

The same thing is under the skin of the Sport SVR model and in its case, it is enough to reach 60 mph in 4.7 seconds. Since Velar is smaller and lighter, be sure that it could beat that acceleration time. The identical powerplant is also used by Jaguar F-Type R model and XJR, while F-Type SVR model boosts 25 hp more from the same source.

As Range Rover Sport had its dose of visual tweaks for SVR outfit so will Velar. Expect more aggressive fascia, probably standard matrix headlights, bigger and special alloys, sportier diffuser, and maybe round quad exhaust outlets, though we are not sure about the last one. On the inside, we will be getting gorgeous Range Rover sporty seats and special trim probably involving carbon pattern, but nothing exaggerated in order not to spoil the sublime feel of luxury.

This is a bit tricky. If you look at sheer size, Velar is mid-sized SUV, but that is exactly what Sport model is, and two same things under one badge just confront the reason. If you look at the price, starting one of $50k is just in the middle between higher part of the compact segment and one where it fits by size. So, Sport is evidently rivaling BMW X5, Mercedes GLE, Porsche Cayenne, and so on, while Velar is not quite there by price, but it does obviously sit above X3, GLC and Macan.

Sport SVR model is priced at $112k, while Velar with the same moniker should circle around $94k, which is also below things like BMW X5 M, X6 M and Merc AMG GLE 63 but not that much, while Cayenne Turbo S is a separate story with an outrageous price tag of $158k. Furthermore, figure needed for Velar SVR is apparently grossly above AMG GLC63 and upcoming F-Pace SVR hovering at about $70k mark, but to make things complicated Macan Turbo is quite close.

Now to make things clear, since we have mid-size SUV things priced even below regular Velar like Audi Q7, Volvo XC90, Acura MDX, Infiniti QX70 and some others and since its size is clear, consider Velar as scaled down Sport. Look at it as a fancier, nimbler, a tad less luxury and bit smaller mid-size SUV variation of Range Rover, while the 2018 Range Rover Velar SVR is probably future most entertaining Land Rover product that you can corner with.