When Porsche decided to up its game, they made many traditional fans infuriated. The largest part of that fury was absorbed by Cayenne, so when Panamera debuted in 2009 many were already accustomed to the new ideas from the German company. As sales are exploding in the recent decade, Porsche is continuing to offer new stuff, and while hybrid has been already seen several times, new 2018 Porsche Panamera Turbo S E-Hybrid acts as a model that widened of the whole picture and added something more to that.

First Porsche introduced Panamera S Hybrid in 2011, mixing V6 petrol engine with an electric motor for the total output of 380 hp. Since in 2013 facelift of regular version came, new 2018 Porsche Panamera Turbo S E-Hybrid was introduced with the upgraded power to 416 hp while it also became a plug-in hybrid model. This version was replaced last year by Panamera 4 E-Hybrid boosting power to 462 hp. So, you are probably baffled with all these names, and you are wondering what is than Panamera Turbo S E-Hybrid.

Comparing it to Panamera 4 E-Hybrid, it is what Panamera Turbo represents compared to Panamera 4 model. Or in short, this is “THE” top offer in the hybrid lineup or any lineup as you are about to see. 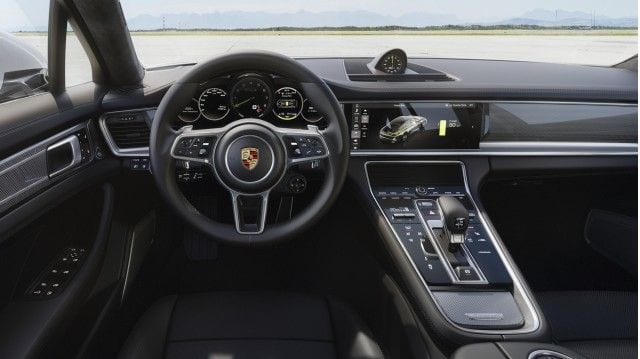 All previous hybrid models were using V6, while this one, doesn’t use Turbo in its name for vain. It borrows 4.0-liter V8 from Turbo model rated at 550 hp and together with an electric motor it delivers the total power of 680 hp and 627 lb-ft. Joined by 8-speed PDK automatic and AWD, that means it reaches 60 mph in 3.4 seconds and goes all the way to 193 mph.

That is the way more powerful and faster than the top of the line Turbo model, which makes this plug-in hybrid new flagship and definitely most expensive Panamera so far with starting price of $184,000. Also, besides it only sips fuel with 81 mpg combined fuel economy rating, plus it can travel 31 miles just on batteries, which is more than Prius Prime can. This is performance hybrid in the first place and electricity is here for mind blowing performance, as it is with McLaren P1 or LaFerrari.

Electric motor, which alone delivers 136 hp, draws power from 14.1 kWh lithium-ion battery that is liquid cooled. With 3.6 kW charger battery needs six hours to charge fully, but with optional 7.2 kW, it needs only 2.4 hours. You can even control charging process over your phone using an available app.

We mention that you can travel solely on battery for about 31 miles and the car is preferring that way of as long as you don’t push the pedal hard or as long as the battery don’t get depleted. In that case, the whole powertrain gets engaged, and you have whooping 680 hp under your right foot.

This is the priciest Panamera that you can get, and it comes in two trims, base one and $10k more expensive Executive version. Lot’s of things are standard, and many of them are here to allow you to make full use of tremendous power that is available. Count then on Porsche Ceramic Composite Brakes, Dynamic Chassis Control Sport, Active Suspension Management, Torque Vectoring Plus, Power Steering Plus and even rear axle steering.

The 2018 Porsche Panamera Turbo S E-Hybrid will officially debut in Geneva next month. If you are thinking of buying it, don’t be fooled by the plug-in hybrid specification. This is not purchased to preserve the planet or save some money on fuel, but surely you can do that if you are careful enough.

Anyway, it is almost $40k more expensive than Turbo model, so count when will come the point when you are actually saving on fuel, merely never that is. This is the fastest, meanest and most brutal four door Porsche in history and it should be viewed like that. If you like that, go for it.