After a short period in which Armada was absent from North American market, Nissan decided to give it another go with an entirely redesigned model. Moving away from Titan truck new vehicle now shares its platform with Infiniti QX80 while they both share Nissan Patrol’s global platform. New Armada uses the robust body on frame chassis and is offering extraordinary off-road capabilities. Not much can be changed for 2018 Nissan Armada, but there is, of course, few touches here and there that Japanese car maker will have to do for 2018 MY.

Regarding the design, we will be getting an identical vehicle, and major changes will not be offered, at least not this early after the redesign. The 2017 MY year was introduced at the beginning of 2016 and went on sale later same year. 2017 SUV hit the moment of its release right on the spot so exterior changes can happen, but the general opinion is that no significant changes are needed.

On the inside depending on the trim, you could have various equipment at your disposal. 2018 Nissan Armada will come with four-way adjustable seats, an 8.0-inch infotainment touchscreen with navigation, heated front seats, Bose sound system, satellite radio and 18-inch wheels. Tech will also follow closely and same as the current model, 2018 version will have surround view camera, adaptive cruise control, forward collision warning, blind spot monitor, etc. 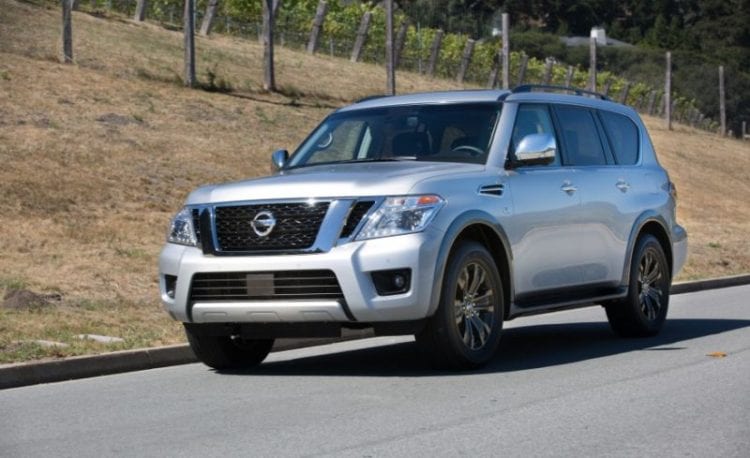 The department where 2018 Nissan Armada needs improvement is the engine bay. It has the same engine as QX80 which is 5.6-liter V-8 with 390 horsepower and 401 lb-ft of torque. These numbers are higher on Infiniti, and they stand at 400hp and 413 pound-feet of torque. It would be nice to see equaled figures and also diesel unit should find its way onto new SUV. Which one will find its way onto new Armada remains to be seen because Patrols’ 3.0-litre four-cylinder turbo diesel no longer meets emission requirements.

Current Armada starts at $44,000 for base trim while the upper Platinum trim costs up to $64,000. These numbers won’t change for next one unless Nissan delivers diesel then it will probably go up to $70,000 but nothing north of that.

The release date is likely to be around the third quarter of this year. Nissan hasn’t stated anything as of yet, but you can expect new Armada before the end of 2017.