You see, there is a plenty of wrong with Mitsubishi over the last years. Starting from the latest fuel efficiency scandal, which drove it to the Nissan’s hands and going to Lancer Evolution which is about to be euthanized during this year. Are Japanese gone insane or not, we don’t know, but we do know that EVO version of Lancer defined the brand all the way from the 90’s.

Nothing is fine with the rest of the lineup too. Mirage and regular Lancer are quite dull, ASX or Outlander Sport is seven years old, Outlander is approaching to usual six years life span, and we will see whether the automaker has prepared successor at all. Also, Mitsu just went from profitable company to one making losses, so they have to pull themselves together and could 2018 Mitsubishi Eclipse Cross be just that?

Although not a coupe, the Eclipse is back and the Japanese automaker unveiled it before its official public introduction at the Geneva Auto Show in March. 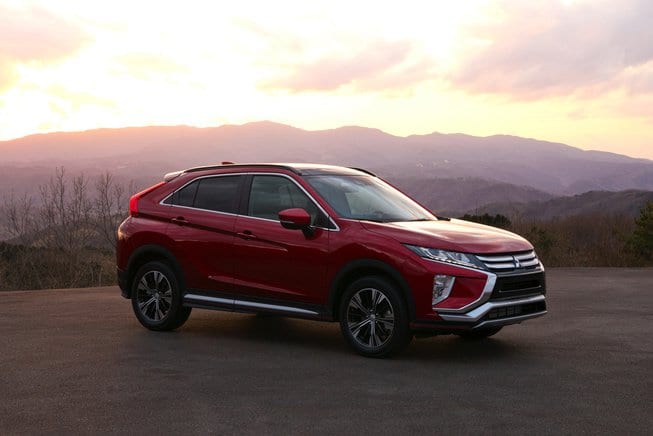 As Mitsubishi previously explained, the company will not be introducing sedans and coupes anymore, so the new Eclipse is now a compact crossover. Its main competitor in this section is the Nissan Rogue Sport which was unveiled in January at North American International Auto Show in Detroit. 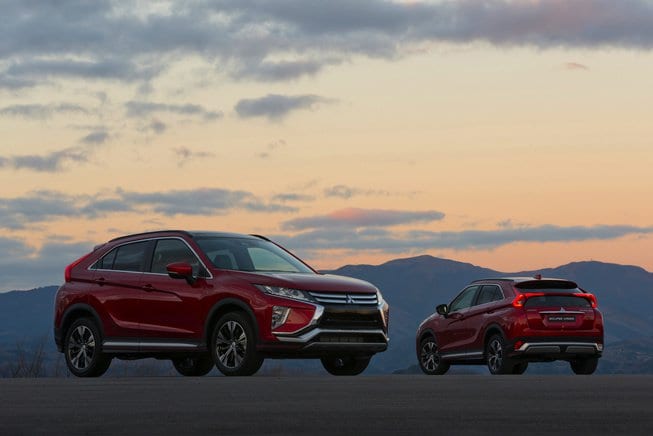 The new Eclipse draws many styling cues from the XR-PHEV II concept which was revealed at the 2016 Geneva International Motor Show. The most noticeable features that two models share are thick chrome accents which form an X-shape at the front fascia, whereas a roof-mounted spoiler and L-shaped lights that are connected by a light bar present the main similarities at the rear end. Thanks to sporty C-pillar, the vehicle has a coupe-like roof line which puts more stress on form rather than on function. 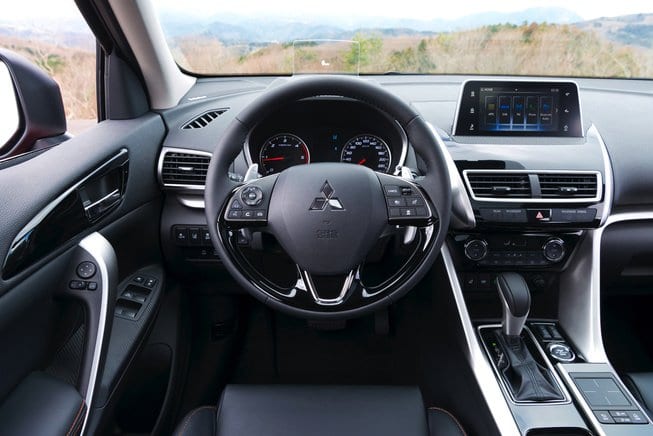 The new Eclipse will feature Mitsubishi’s latest design language which will be somewhat employed on pretty much every vehicle in the future.

In an interview with Autocar, an inside source stated, “Land Rover has proved you can be both rugged and stylish, and we intend to follow that path.” 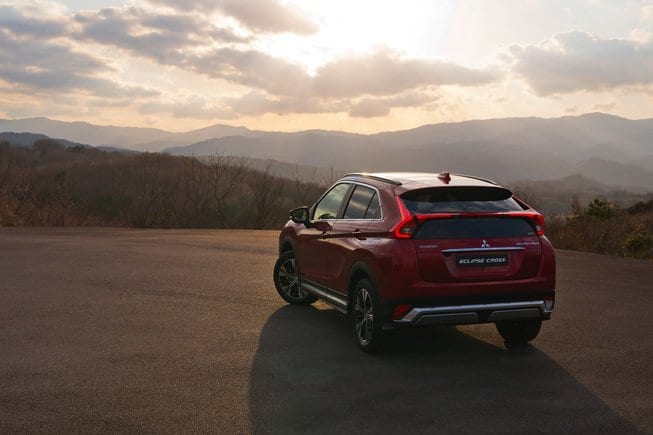 The U.S. market version of Eclipse will be only available with a turbocharged 1.5-litre four-cylinder engine, while both continuously variable transmission (CVT) and all-wheel-drive (AWD) will be standard. We still do not know the vehicle’s exact performance specification.

Mitsubishi will introduce the Eclipse Cross next week at the Geneva Auto Show, but the U.S. version will probably be unveiled at the New York show in April. This model will hit the showrooms as 2018 model year.

What we have here are the first photos of a prototype for Mitsubishi Eclipse Cross.

The Japanese automaker will introduce the new model at the Geneva Auto Show which is scheduled for March 2017. Mitsubishi decided to place the new SUV between the Outlander Spot and mid-size Outlander. 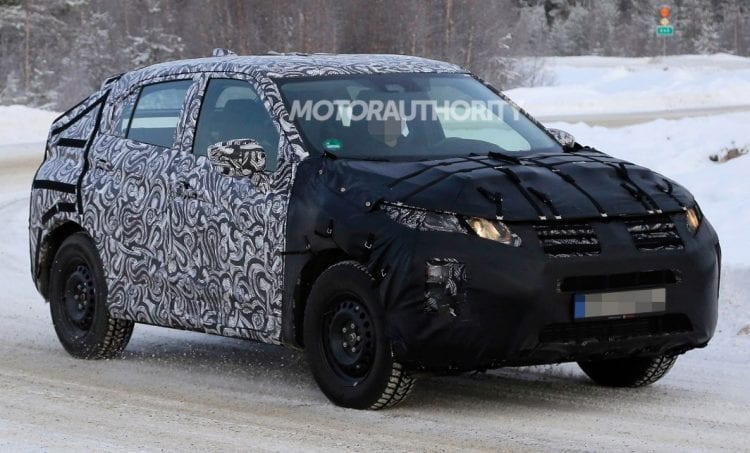 This vehicle should be a sportier yet more look and design-focused version of other SUVs that the company produces. Although in the same range as Mercedes-Benz GLC Coupe, BMW X4, and Land Rover Range Rover Evoque, this one will be a less expensive and more affordable than its competition.

The styling is based on 2013 Mitsubishi XR-PHEV concept. At the front, the face of this model is supposedly representing a shield, whereas tail-lamps are mounted high at the rear. If you take a look at these images, you will see that the concept version and production model are quite similar.

We expect an inline four for the standard Eclipse Cross while a plug-in hybrid version will probably debut later. More details on this segment will come as the release date approaches, and we do expect to see this vehicle introduced this year as a 2018 model. 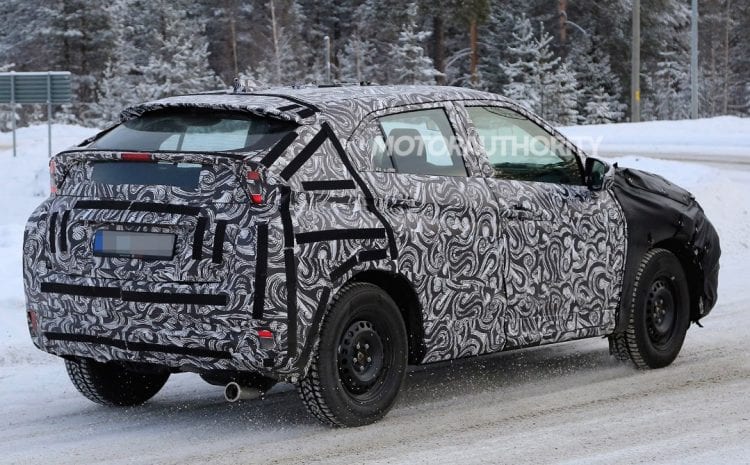 The commotion regarding a Mitsubishi SUV is present because it might just succeed and replace the Lancer Evolution. Earlier when the Japanese manufacturer revealed a version of the Eclipse Cross paired with XR-PHEV concept and assigned it with the Evolution name, we saw that the model featured S-AWC all-wheel drive, an 8-speed dual clutch gearbox, and plug-in hybrid powertrain.

As we are approaching the 87th Geneva International Motor Show, we should get more info about the new model. Until then, all we can do is to sit back, relax and observe the Eclipse Cross on these photos.

You must have thought that the second coolest thing from Mitsubishi has been returned and you probably chant the words of the subtitle. You thought that Japanese are going back to sanity with a resurrection of the sleek V6 powered coupe and that Lancer EVO will, against the odds, survive also. But you couldn’t be more wrong! Eclipse Cross is not a new coupe, in fact, it is not anything close to it.

It is one more compact SUV, that should slot between ASX and Outlander, and who knows why it carries Eclipse nameplate. Not cool, not cool at all! 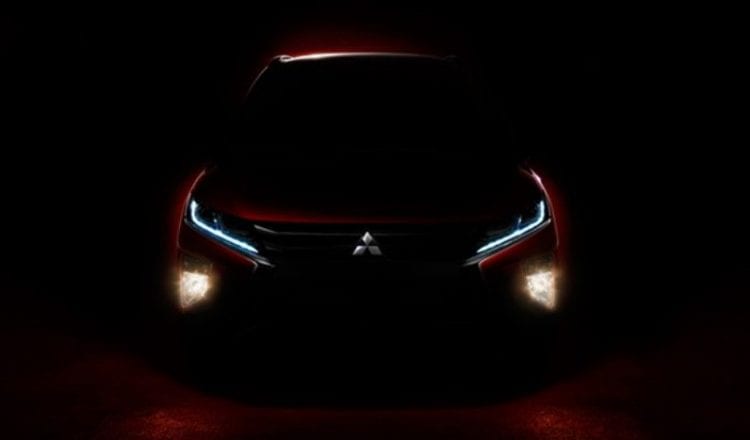 We knew that the Japanese company is onto something as in 2013 we had EX concept, and in 2015 we had a new one as XR-PHEV II. First one was quite futuristic, while second posed as an evolution of design language of first, though with more realistic touches. At that time we all thought that it was about new ASX, but as we could see later on, it wasn’t.

Mentioned concepts gave insight in what is to be new SUV or our 2018 Mitsubishi Eclipse Cross. We have a couple of teaser images, and they are enough to see that upcoming crossover is nothing but tamed XR-PHEV II, which means that it will look stunning. Finally, something gorgeous to came from Mitsubishi. Forget about the wagon-like look of Outlander, this one has a sloping roof, raising waistline, carved side and Honda Civic style rear lights stretching across the whole tail.

Teaser also tells us that fog and day lights are using LED tech, and same should go for headlights and partially for rear ones. There is nothing on the interior yet, but we sincerely hope that it will follow the path of concept, as exterior does since we haven’t seen anything but dull, plain and unimaginative things from Mitsu till now.

Japanese car maker is in a terrible position right now, so the development of the new engines is not a likely option. That means that Eclipse Cross is going to tag along with existing line up. As a result, you can count on 2.0-liter delivering 148 horsepower and 145 pound-feet of torque or 2.4-liter rated at 168 hp and 167 pound-feet of torque.

The base engine is paired with a manual, while CVT comes as an option, while bigger unit goes to CVT right away, and we are not sure whether that is a good thing. Maybe, just maybe, these engines could be tuned for little more power, we will see anyway. 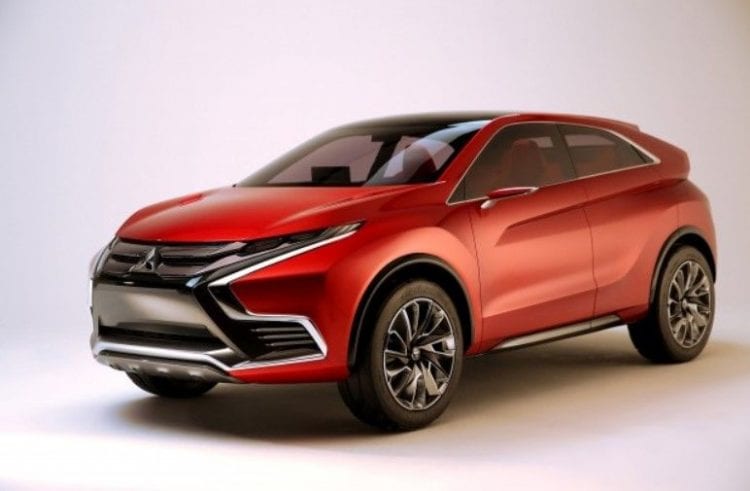 If you want to wait for 2018 Mitsubishi Eclipse Cross, it will be a short one, as it is set to debut at Geneva Motor Show. Price is going between two siblings, so expect something around $22,000, which would be quite fair. Is it actually worth of waiting, is tough to answer. It is presumably the best move that Mitsubishi has done in a long time, but it will be far from a complete package. It will feature alluring looks, we hoping in the cabin too for the first time, while engine part remains as nothing special and don’t expect some modern driving and safety tech, that you might see with many rivals.

It is a step in the right direction, and honestly biggest flow is the name, it is totally missing the point, maybe it’s even worse than the case if it took concept name- XR-PHEV II, which we dare you to try to remember.