During 80’s Mercedes was offering coupe edition of S-Class, which was later renamed to CL when new generation arrived in 1992. CL moniker remained until 2014 when Germans again decided to call it S-Class Coupe. Arguably it is most luxurious and most beautiful Merc model, and after three years on the market, a facelift is approaching in the form of 2018 Mercedes S-Class Coupe. We covered masked upcoming refresh of sedan version and cabriolet, so the Coupe deserves a bit of attention too. 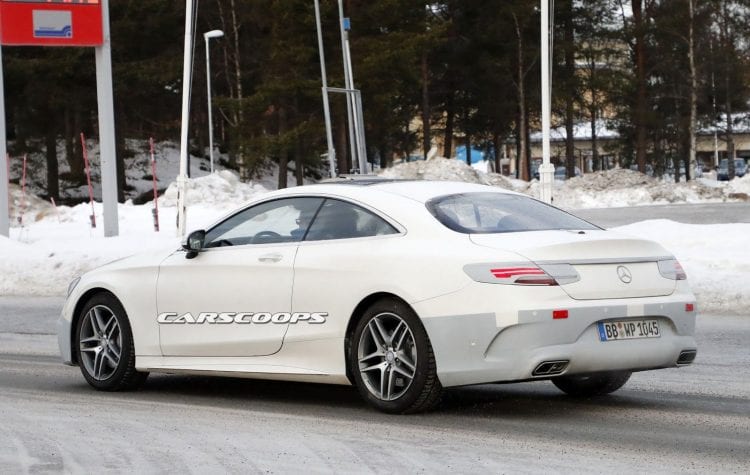 The current version is gorgeous, and we wouldn’t change a bit about it. Anyway, industry standards say it is time for a mid-life refresh, and new Lexus LC rival arrived, but don’t expect much of a change, because it really doesn’t need it. Spy photographers caught a car that’s being tested, but as you see it is not heavily concealed and camouflaged. Front bumper is mildly covered so it should probably see some slight revision, mainly considering air intakes.

Headlights are not hidden and are same as on the current model, but we should see a different layout in the future, and same goes for rear ones, which are actually covered right now. Rear bumper should see the same extent of changes as front one, possibly including a differently styled diffuser.

The current cabin is as stunning and lavish as you can get at this moment. We had the opportunity to see spy photos of cabriolet’s interior, so the same thing counts for the future coupe. The steering wheel was covered in the photo, suggesting that new design is in the development and two-piece digital screens are about to merge and become single piece one. Presumably, new trim and accent options should broaden the choice, along with mentioned changes. 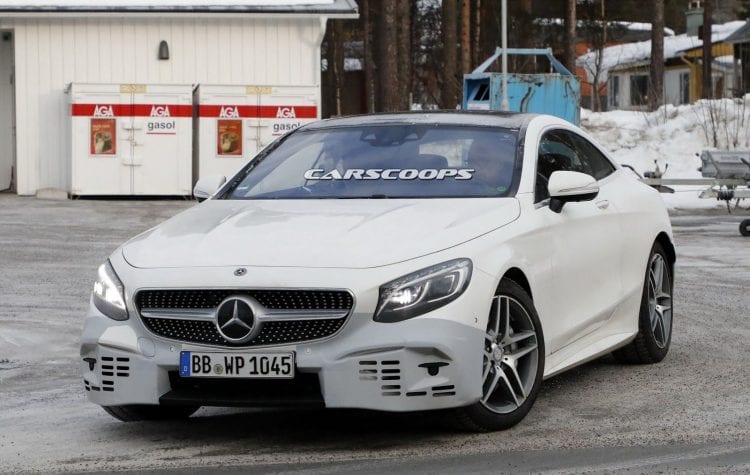 2018 Mercedes S-Class Coupe UNDER THE HOOD

Don’t expect any upgrades to the current engine lineup that is offered. That means S500, or S550 in the US, will still carry 4.7-liter Biturbo V-8 underneath, that delivers 449 horsepower and 516 pound-feet of torque. It reaches 60 mph in 4.5 seconds, while top speed is electronically limited to 155 mph, same as for all other engines. Besides that, there are two AMG badged models, S63 utilizing 5.5-liter V8 unit rated at 577 hp and 664 lb-ft, while the top of the line S65 boosts 621 horsepower and 738 pound-feet of torque from 6.0-liter V8.

All powerplants are mated to a 9-speed automatic and AWD comes as standard equipment. As for the fuel efficiency, in the best case, S-Class Coupe offers 17 mpg in the city and 25 mpg on the highway, but that is of least importance here.

No. We bet you are startled now, with that answer. If you have the desire to purchase shortened S-Class, you can as well do it now, as it is perfect. If you are a nitpicking person, then wait for 2018 Mercedes S-Class Coupe to debut and settle with slightly improved perfection. If you are wondered how much is perfection anyway, it starts at around $123,000 and ends with $236,000 for top AMG model, and we don’t expect any huge changes in that area when refreshed model arrives.