Mercedes came late to the party when we are in the area of compact crossovers. Still better late and in a proper way, than to experience a repetition of darker sides of Merc history as with the first generation of A-Class. BMW offered their view of small SUV in 2009, Audi in 2011, while Benz entered the party in 2013.

GLA is based on A-Class evidently not just under the skin, as the skin itself is obviously not shy openly showing its roots, and since four years has passed from revelation, it is time for some freshening up according to the company. So, Germans have just used one of the most important car shows in the world and presented 2018 Mercedes GLA in Detroit. 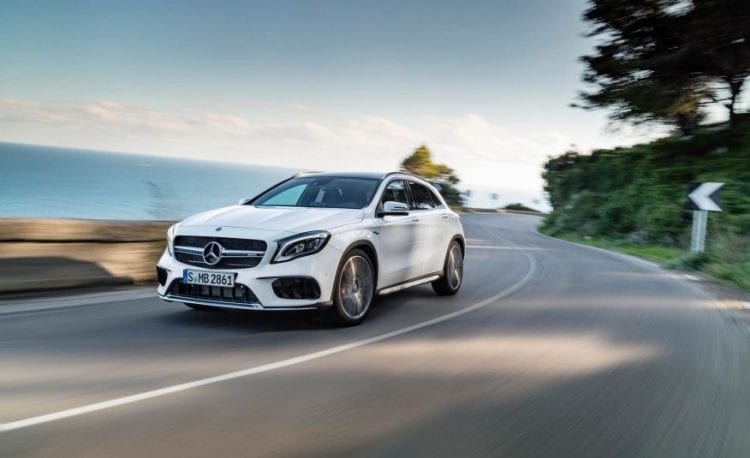 GLA was frankly looking quite up to date, trendy and posh in pumped up A-Class body. It is a crossover no doubt about that, but since that word is often used as a synonym with SUV, largely because body on frame SUVs are under extinction, it had too little cues to connect it with that moniker. It looked more like allroad, cross country, allterrain, or something like that, version of A-Class. Anyway, Merc is trying to justify SUV moniker now as GLA has received proper styling clues from that part of the world.

In that sense, the grille is revised, having two thick and vertical slots, originally introduced on first generation ML, then second and now seen on top SUV model GLS. The bumper is also revised, while fog lights moved to the side and headlights are featuring LED treatment instead of previous optional bi-xenon. To prove the story about a more SUV-ish part, GLA is now 30 mm higher giving it more serious stance. For the cabin, Germans applied only slight changes, and everything is pretty much the same, apart from revised instrument cluster.

All existing engines carry on unchanged, and you may become disappointed if you expected some rise in power figures. Anyway, there is something even better as the new unit is offered designated as GLA 220, which stands for petrol unit delivering 181 hp and 221lb-ft of torque. It slots right bellow strongest petrol version GLA 250 with 208 hp and 258 lb-ft, while under it are 1.6-liter rated at 122 PS and 148 lb-ft as GLA180 and unit with 154 hp and 184 pound-feet named GLA 200.

In the US offer is restricted only to GLA 250 and AMG GLA45 with astonishing 375 hp from a just 2.0-liter engine. For gearboxes, still stands offer of 6-speed manual or dual-clutch automatic, while AMG carries its own AMG Speedshift DCT transmission.

2018 Mercedes GLA is still trendy and classy while trying to fool you now that it isn’t afraid of nature anymore. It keeps playing on styling card, compared to more spacious and practical competition, but it should be enough as it was with pre-revised version.