Mercedes introduced current C-Class in 2014 and it visual represented baby S class, so baby Benz term was properly justified. Most important thing was new Modular Rear Architecture (MRA) platform that used aluminum and high-strength steel and achieved weight decrease of 220 pounds over its predecessor. While sticking to its “best or nothing” philosophy, Merc is already working hard on the redesign as we can see spy shots of masked cars on the public roads, making clear that 2018 Mercedes C-Class is underway.

Don’t get too carried away with photos as Germans are playing the same game as with S-Class, so they are testing different parts individually instead all at once, and that is the reason why a car is wearing so little camouflage. 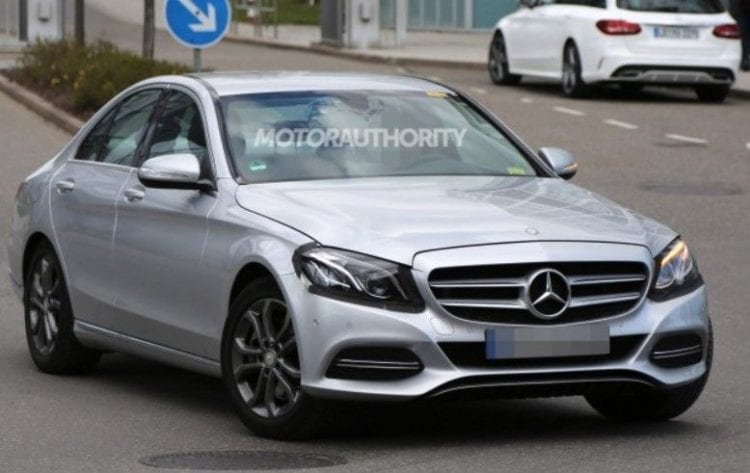 Don’t expect much as the current model looks incredibly fresh. It can easily skip these changes and proudly parade till the end of its lifespan. Anyway, there is nothing that couldn’t be improved on the Earth, so looking at the photos, revised front bumper should be offered with slightly larger corner vents and air dam. Also expect revised grill and headlight lens configuration.

The rear of the car is currently unmasked, so we will speculate that exhaust outlets could be altered to be slightly larger and chromed, this is not all as we should of course count on the introduction of revised taillight units.

The cabin is sublime, both in design and quality of materials. No big changes are expected certainly. We had rare opportunity to peek inside, and something that is visible in the photos is going to bring joy to many faces. An awkward mouse-like controller is gone, although it was beautifully styled and in its place seats touch pad which would be much easier to use.

Other small upgrades of the new 2018 Mercedes C-Class are visible with instrument cluster as the TFT display screen between the two primary gauges appears to be larger and with door panels as door handle seems to be sitting a little farther back and lower.

Expect none, or maybe just slightly bigger power output. Current offer in the US is C300 with 2.0-liter delivering 241 horsepower and 273 pound-feet of torque, with the ability to hit 60 mph in 6 seconds. That power is delivered to the rear wheels via a seven-speed automatic, but for a few extra thousand, you can get the 4Matic model with AWD.

Next would be the C43 which comes with the 3.0-liter V-6 and 362 horsepower along with 384 pound-feet of torque, decreasing 0-60 mph on 4.6 seconds. Now we come to the best part of Mercedes, and that is the AMG division.

Pricing is total unknown at this moment, but no major changes are expected. It is sure that price is not going to fall, but it could hardly rise for $1,000 more.