The German automaker decided to test the refreshed 2018 Mercedes-Benz C-Class in cold-weather conditions in Sweden, and our camera was there to capture it. Following the previous prototype, this one also features less camouflage and the only parts that are masked are the front bumper and the lighting clusters.

We cannot see any changes done to the front at this point since the manufacturer did an excellent job of masking it. In January, we saw a coupe prototype that had different headlights than this model which might suggest that the company plans to introduce two distinct options in this segment. The earlier coupe prototype had four LED projectors on both upper and lower sides, whereas this one features a different configuration of the “Multibeam LED” lights. 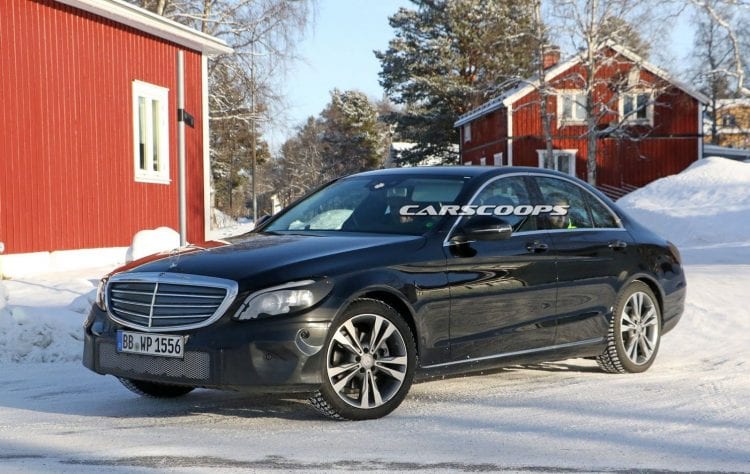 This might suggest that Mercedes plans to get rid of standard halogen lights for the base model and replace them with an all-LED setup. The more expensive trim levels will probably get a fancier configuration. The LED taillights have different graphics too, which concludes the list of noticeable changes on the updated C-Class.

Although we cannot see inside the cabin on these shots, based on previous spy photos, we know that the upcoming vehicle will feature an updated infotainment system that has a new touchpad and no scroll wheel. This upgraded technology is expected to find its way into other new or updated models which already is the case with the 2018 E63 Wagon.

Judging by the lack of camouflage on the spied car, it is safe to say that the automaker plans to reveal it this year. Since the Geneva Motor Show is only weeks away, we doubt that it will be introduced there, but it might happen at the Frankfurt Motor Show which is scheduled for September. The updated C-Class will probably have its on-line introduction before the real-world event.