Mercedes is in full swing. It adopted the idea of corporate design from Audi, and it took it to another level. Despite the critics that everything looks the same, the fact is that Stuttgart manufacturer is on its way to collect crown from BMW this year as the best-selling luxury car brand in the world, which was inaccessible for many years. We all knew that after E-Class sedan and wagon were introduced this year, coupe and convertible, 2018 Mercedes-Benz E class Coupe will soon follow.

Nobody questioned future looks, as we are far familiar with nature of moves that Mercedes is pulling recently. So let us see what 2018 Mercedes-Benz E-class Coupe has to say for itself.

Everybody knew that this is going to be larger C-class Coupe or smaller S-class Coupe, it doesn’t matter which one anyway because the same correlation applies for mentioned two. If we pay closer attention, and we owe that to Merc, we will see, despite camouflage, that E-Class coupe more resembles S-Class coupe than to its smaller sibling which is a nice move. We notice those two bulges on the hood that are shared with the bigger brother, and same goes for rear lights that are elongated compared to ones on C-Class Coupe.

There is also interesting part, and it is connected to the statement issued by Mercedes-Benz chief designer Gorden Wagener, who sad “If you think you cannot take off another line, go ahead and do it anyway”, so part of the car that everybody expected to look the same to other coupe models in lineup, is actually different. This is related to a profile that lost sharpness of both upper and lower sideline.

Basically, previous E-Class coupe and former CLK were based on C-Class with specific design features to bring it closer to E-Class. New coupe tried to justify its prefix, so it grew significantly, it is precisely 5.2 inches longer, 2.9 inches wider, and 1.5 inches taller than before. 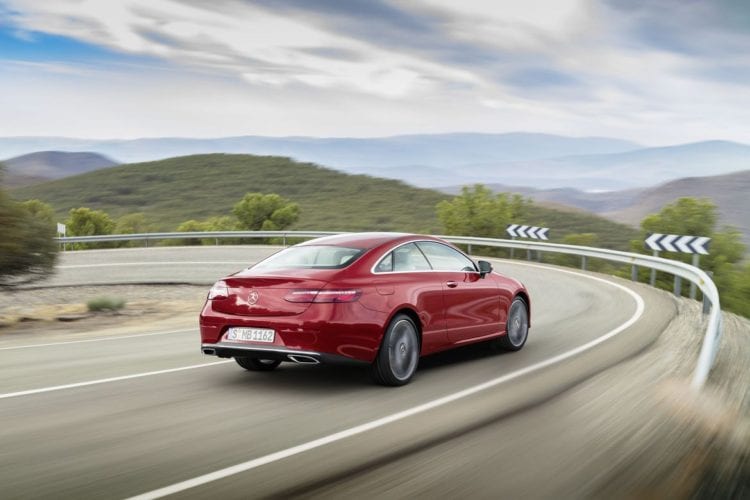 The previous model featured sedan cabin in shortened shape to fit it in a smaller body. This one has a proper E-Class dash, with its 12.3-inch displays, while difference would be air vents designed in a manner to resemble jet turbines. Another novelty is the fact that knob on the central stack can be deleted leaving only the touchpad. Space will be abundant, and it will correspond to the one in sedan version, even at the back, which is refreshing compared to C coupe tight rear spacing.

For the US market, the new model will come with E400 nameplate pumping out 329 hp from 3.0-liter twin-turbo V-6 with rear or all-wheel drive, while more powerful will be AMG model with a 3.0-liter V6 boosting out 450 horsepower and both engines will be paired to nine-speed automatic. Potent engines will be followed by decent noise, but GT aspirations will be preserved with safety systems which will rarely allow Jag F type’s back side fun, even in Sport+ mode.

2018 Mercedes-Benz E-class Coupe is about to hit showrooms in the US in the summer of 2017 and of course, it is worth of waiting for. C-class Coupe is just too cramped at the back, while S coupe is unreachable for many, due to the price tag, so this one could be a perfect choice.

When confronted with rivals it has a very special position, it is bigger than BMW 4, Audi A5, Lexus RC and pricier, leaving them to be handled by C-class Coupe, while on the other hand, it is significantly cheaper than BMW 6 and Lexus LC. Due to the weird pricing politics of its actual rival BMW 6, it sits in its place without adequate competition, and that is going to affect its sales in a positive manner.