The newest off-road vehicle by German carmaker is 2018 Mercedes-Benz E-Class All-Terrain. We all know how big offensive Mercedes is performing currently. It introduced new styling language, and it is bringing a bunch of new models. When Merc called the year 2016 as the year of the SUV, we all thought of introduction of rivals for BMW X6 and X4, even for Bentley Bentayga, possibly mini SUV, or maybe something to rival Evoque without the roof. Maybe just a few remembered special part of the segment which Audi and Volvo are occupying for a long time and which is hard to be defined as it represents a step between a station wagon and SUV.

We are talking about Audi A6 Allroad and Volvo V90 Cross-Country, former XC70, which were standing alone for a long time and Stuttgart offensive is merciless. The current generation of E-Class was introduced this year, and T model followed right after, then came AMG version and coupe with soon to be seen variant without a roof. That was nothing new, and it was same as before, but one novelty is just around the corner as E-Class lineup is about to set sails to unknown waters with new 2018 Mercedes-Benz E-Class All-Terrain version. 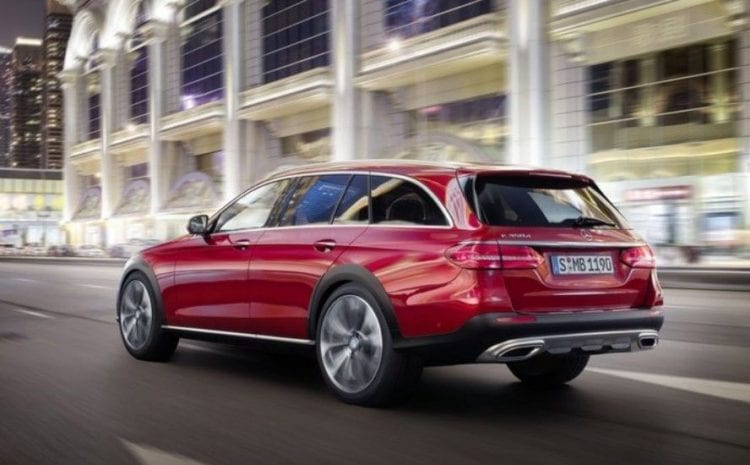 It is an estate version of E-Class, but with lots of SUV styling bits trying to assure us that it can do business outside of the pavement too. There is a plastic covering for bumpers and side skirts and also for wheel arches making them bulkier and with that adding to the overall feeling of mightiness. Right from the SUV world we have skid plates in Silver coloring and raised ground clearance. Most striking change is new SUV like grille with two large horizontal lines suiting its new nature completely.

The cabin is the same as one in the E-Class, and since it is perfect nothing should be changed. All-Terrain model features aluminum-carbon trim, which includes stainless steel sport pedals with rubber inserts and unique floor mats with embedded “All-Terrain” letters. Base trim for this model is Avantgarde with Exclusive and Designo features as optional.

Engine options are limited here, as German carmaker decide to offer just two diesel options- 220d with 194 hp and 295 lb-ft, and still unofficial, but to be expected, 350d V6 with 258 hp and 460 lb-ft. Both are joined by new nine-speed automatic transmission named 9G-Tronic and with known 4Matic all-wheel-drive system present in brands lineup.

This is a key area to persuade somebody to go with this kind of transportation. You can count on remarkable solutions for luggage seen in T model, as back seats can lean by 10 degrees enlarging boot by 30 liters to impressive 670 liters, they can also fold in 40:20:40 configuration and if all are folded unbelievable 1,820 liters of space is available. Special for this model is new mode within Dynamic Select feature called All-Terrain, which if engaged raises the chassis by 20mm for the speeds up to 35 km/h.

As an addition, Air Body Control offers three possible levels starting from zero and up to 35mm of raised suspension, so you never feel threatened by larger rocks or dents in the surface standing in your path. Also unique is a display with a special indicator showing angle degree of the obstacle in front of you, a current position of air suspension, together with compass and some more stuff.

2018 Mercedes-Benz E-Class All-Terrain is going to be everything that E-Class is while offering even more. The current model is just immaculately perfect in elegance, technology, and luxury and with this model finally in everything that was left. Priced few thousands more than the regular version, probably from €52,500 in Germany, it offers same uber-luxurious, impeccably elegant E-Class package that you can now take pretty much everywhere without breaking a sweat.