Mercedes introduced AMG GT model three years ago. It came as a replacement for SLS AMG which was double priced and half way capable on track than it. So, everybody was happy, with all due respect to the iconic design and gullwing doors of the predecessor. For the current version, the whole thing became really serious when Germans revealed R-badged model in 2016 at Goodwood Festival of Speed, and let’s recollect what do we know about it since it is about to hit the US streets this summer.

If you actually decide to go out and buy 2018 Mercedes AMG GT R do know that Germans made sure that you will stand out among regular models. R version is a track oriented thing, and visual side of it state that without any doubt. Huge slats from Panamericana grille and gaping intakes on front bumper makes regular GT looks like a puppy next to it, but sadly for it, all versions are switching to the same iconic grille. 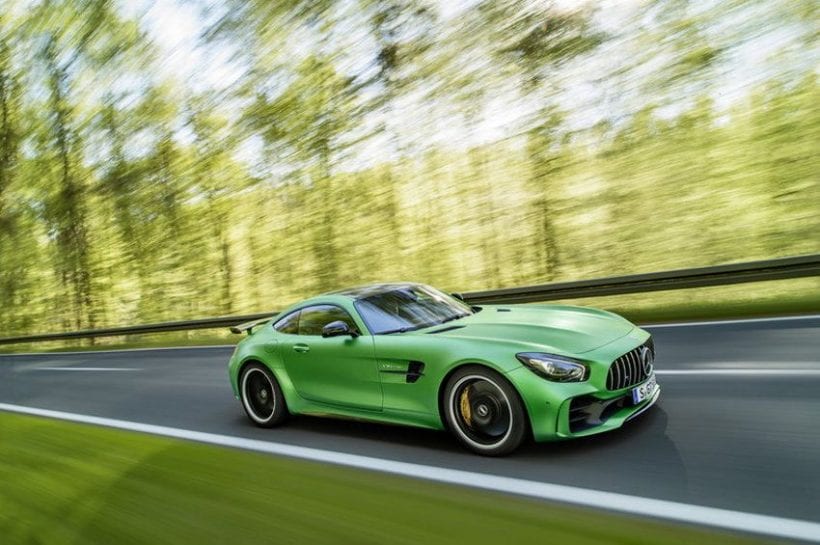 Since AMG GT hides incredibly luxurious and comfortable cabin inside, with an addition of R it still doesn’t look terrifying, contrary to the exterior. This is probably the plushest interior that you can get in track oriented things and very thin bucket seats and extensive use of Alcantara hasn’t managed to dilute the luxurious essence of it. Perfect!

Every AMG GT model comes with AMG developed twin-turbocharged 4.0-liter V8. You’ll also find the same engine in every newer AMG 63 model across the whole Mercedes lineup, as it is replacing older 5.5-liter V8. But that V8 doesn’t produce same power figure in all of them. In revised AMG GT it delivers 476 hp, in S model 522 hp, while in our R model it goes up to 577 hp. Add to that 516 pound-feet of torque and 7-speed automatic, and you’ll reach 60 mph in 3.5 seconds.

But R is not just threatening looks and more power under the hood. We all know that for stealing every tenth from lap time, you need much more stuff. But don’t worry, this Merc will deliver all necessary. Let’s start with special attention to aerodynamics. Underneath you have carbon-fiber flap that can move changing airflow, you have active grille shutters and horizontal opening below the wing to vent heat from the exhaust, while the aerodynamic effects of the terrifying diffuser are left on you to judge.

The whole chassis is lighter and stiffer as it leaned more on carbon fiber, the suspension is adjustable, there are nine choosable levels of action for traction control, and most importantly GT R comes with rear-wheel steering. For your fully understanding about what all mentioned above does on the track, note that this top of the line performance oriented vehicle took 25 seconds less around Nurburgring than AMG GT S model, which is in the automotive world pretty much a century. Purely astonishing!

Then know that you’ll have to open your wallet for $44k more than for regular model. Yet, 2018 Mercedes AMG GT R’s price tag of $158k is almost $20k lower than one on Porsche GT3 RS and over $80k below the one attached to Ferrari 488 GTB, while you can always throw the fact in their owner’s faces that your car needed 10 seconds less around Green Hell. We couldn’t imagine anybody asking for more.