McLaren dates back to 60’s, but you weren’t able to see much of it on roads until recently. Apart from the tremendous F1 model, that left pretty steep dents in automotive history and collaboration with Mercedes on SLR McLaren, not much of its work was visible to common people. And that was the case until 2011. That was the year when MP4-12C model was launched, and after being more than properly welcomed by buyers, it propelled British brand to full-scale offensive.

The new 720S has been introduced, and it features aluminum/carbon fiber shell and a Biturbo V8 engine that is good for 710 hp. This 2,800 lb beast is also one of the most aerodynamic supercars that happen to have beautiful dihedral doors. 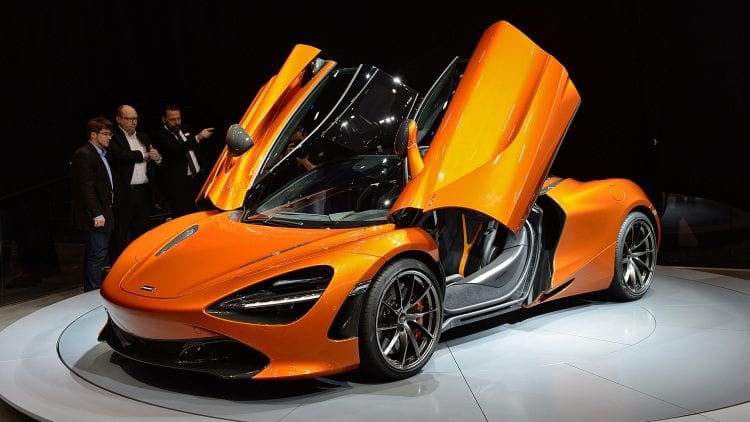 The automaker claims that the new model is lighter, faster and has better aerodynamics than the vehicle it replaces- the 650S. One of the most noticeable differences is that the 720S does not have huge side intake scoops that were meant for engine cooling. Instead, McLaren decided to gather air at the A-pillars and move it towards the door ducts. From that point on, it goes into gills on each side of the engine. The decision was made to improve downforce and to enhance engine cooling by 15 percent. 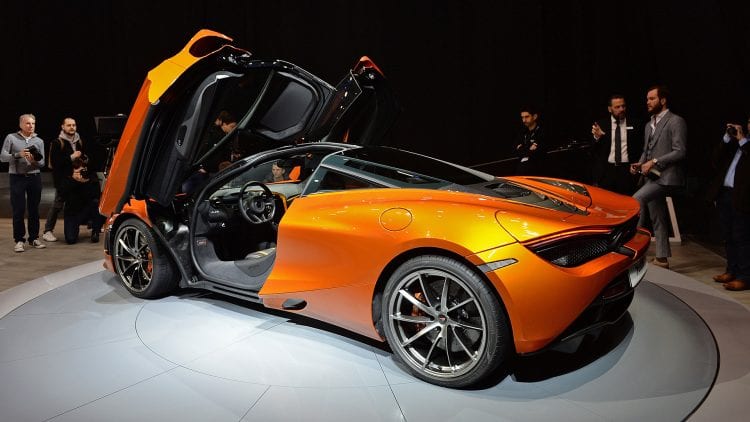 A rear wing stretches along the width of the car and is automatically activated when it is required. It has three options that it can work on and those are meant to improve handling, straight-line speed and by increasing air resistance, it also acts as a brake which can help with stability and distance when breaking.

The new model also features McLaren’s Monocage II carbon fiber tub which grants the 720S with less weight and exceptional rigidity as well. Unlike the first-generation Super Series, this model also includes the roof. The interior is futuristic and minimalistic, and an eight-inch touchscreen does most of the work. With the new Folding Driver Display, you can choose between better forward visibility and a regular look depending on the situation. 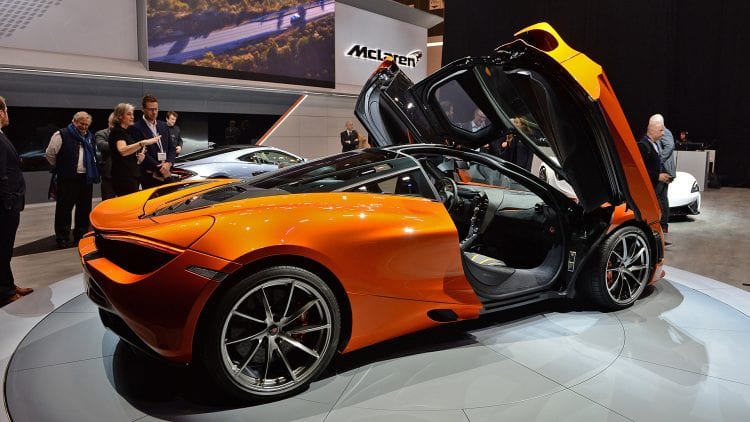 McLaren decided to let go of anti-roll bars, so the new model has company’s new Proactive Chassis Control II that features hydraulically interlinked dampers at each wheel. Some of the mechanical bits were removed, and the vehicle weighs 35 pounds less. Also, in order to improve grip and driver experience, suspension geometry was redesigned. McLaren worked with the University of Cambridge which developed a new control system that uses many sensors and algorithms to make a ride more enjoyable for the driver and passengers. The 720S offers three suspension modes: Comfort, Sport, and Track. You can also have McLaren’s new Variable Drift Control System if you like drifting. Once activated, you can decide on the level of traction assist and at what angle you’d like to drift, after which you can sit back and let the 720S do the work.

Under the hood is the new 4.0-litre biturbo V8 with 710 hp distributed to the rear wheels by using a seven-speed paddle-shift transmission. Borrowing from company’s 3.8-litre engine, the model features lighter pistons and connecting rods along with new turbos, a lighter crankshaft with a longer stroke, and other new elements. The maximum power is at 7500 revs, while 5,500 revs are needed for 537 lb-ft of torque. Other than the wing/air brake we mentioned earlier, the vehicle uses carbon-ceramic disc brakes to go from 125 miles to standstill in just 4.6 seconds.

The 720S is also extremely quick since it only needs 2.8 seconds to reach 60 mph, 10.3 seconds for a quarter-mile and the top speed is 212 mph. Although we still do not know vehicle’s fuel economy, the combined ratings are expected to be above 20 miles per gallon.

McLaren hasn’t yet set the exact price for the 720S, but it said that it would cost about five percent more than the 650S and deliveries are starting in May.

The 2018 McLaren 720S will replace the 650S and will feature a new 4.0-liter twin turbo V8 which will enable the car to go from standstill to 124 mph in two seconds less than a McLaren F1. The 650S was tested two years ago, and the results were amazing. Only 2.7 seconds were needed for the car to reach 60 mph, 8.0 seconds to get to 120 mph and 10.4 seconds for the quarter mile. So far, not many cars were introduced with those results. However, the automaker has decided to replace the 650S with a model that will be even faster, the 720S. 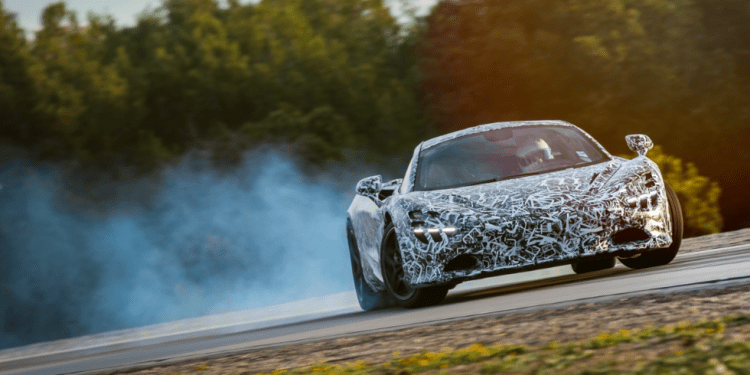 On February 15, the company revealed that the new supercar will need 10.3 seconds for the quarter mile and 7.8 seconds to hit 124 mph. Although there may be differences in figures that automakers publish and real-life test results, the 720S appears to be obscenely quick. For instance, Ferrari 488 GTB is 0.5 seconds slower in reaching 124 mph, whereas McLaren F1 hit the 124 mph mark in 9.4 seconds.

The 2018 McLaren 720S weighs just 2828 lbs, and these results are possible thanks to low curb weight. However, a new 4.0-liter twin turbo V8 is also a part of the improvement. Although we still do not have any official power output figures, we could guess that it will push about 720 hp as 650S delivered 650 hp. 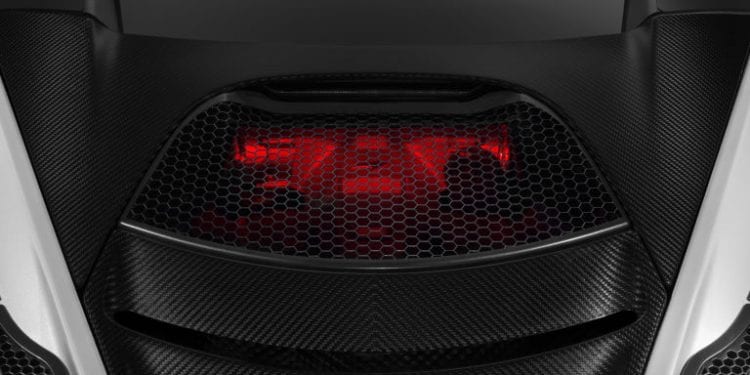 An additional feature that we need to point out is that every time you unlock the car, the engine gets highlighted with a red light which is coming from underneath the deck lid. Even this doesn’t improve performances it is a really nice touch.

McLaren worked on aerodynamic features of the 2018 McLaren 720S which just leaves us with a question regarding the actual speed of the new model when it hits the track.

The proper successor of legendary F1, new P1 with sticker above million dollars saw the light of the day in 2013, while one year later successor to MP4-12C came in the form of the 650S model. The latest thing was 570S presented in 2015 as entry level model. Let’s say that in half a decade we had more models than in its whole history. As name McLaren became well known and respected lately, same as Ferrari, Aston or Lambo, there is no reason for slowing down and neither they will. 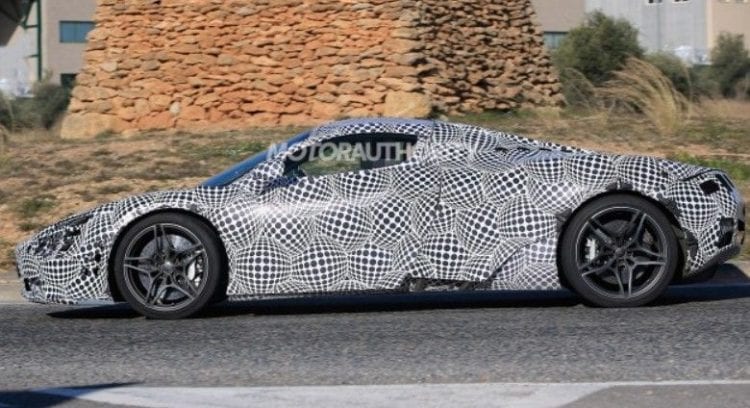 Middle and most important model for the brand is the 650S and four years has passed since it was introduced. That is by itself far from cravings for a new vehicle, especially in this class, but there is more to it if we look deeper. When it was introduced in 2014, despite different fascia, it was basically a 12C model with only 25% new parts.

With knowing that we can conclude that it was more of a redesign than a new supercar. So, next move from British is totally new 720S codenamed P14, replacing 650S, while it is about to hit the streets during 2018.

We can all see spy photos featuring camouflaged test mules, some of them without cover and finally McLaren treated us with one teaser image. What we see from all of that is totally frantic styling that will outshine maybe even one on P1 model. Headlights are going to introduce new styling cues as well as the upgraded rear end also.

Overall shape will appear more aggressive and more planted on the road even when static. The teaser shows us that active rear wing is reserved for it and that taillights are in the form of flowing LED strips in resemblance to P1 and 570S, and quite more stylish than current ones from the 12C model. 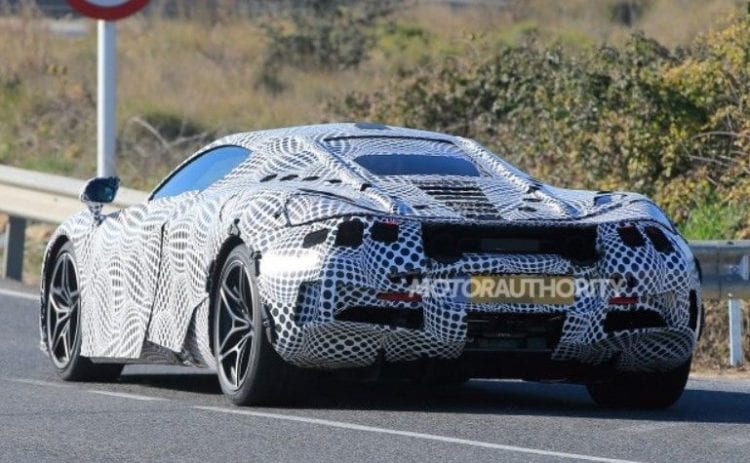 Each number within Super Sport Series reveals what we can expect under the hood. In that manner 650S offers 650 horses, 675LT clearly 675 hp, while last introduced 625C comes with 625 hp. Not much calculation is needed to predict that new 720S is going to boost 720 horses from same 3.8-liter V6. 650S model is already one tenth below 3 seconds line in a sprint to 60 mph, so this version is going to push things even further.

Also since P1 welcomed some help from an electric motor, so could 720S and be offered as a hybrid sportscar featuring tremendous amounts of instant torque in all circumstances, besides sublime acceleration time and cornering.

Rumors says it will probably going to stagger live audience at Geneva Motor Show, and since that event is scheduled for March, we are not far from that. 2018 McLaren 720S will carry on where 650S stops, and that is mostly battling Ferrari 488 GTB and Lambo Huracan.

The current price of $265k may see some steep rise if it comes with hybrid technology under the skin, but that seems fine to us since Aston is asking for over $300k for dated Vanquish.