When Land Rover introduced Range Rover in 1970, it had different plans with it than it has now. It wasn’t conceived as luxury SUV, it was rather off road capable one. The first generation stayed in the production for amazing 24 years, when the second one got its time to shine. The new recipe begins to emerge as new model brought better equipment, more luxuries options, and higher trims increasing the distance between Discovery and it.

But it was third generation and year 2002 when things settle where they are now. The new vehicle was developed under BMW ownership, and besides it entered the market at the time when Ford took the stance, it carried lots of bits from BMW 7 Series. It set the bar for luxury in the SUV world so high that it became the benchmark for it. Also, the hard-core off-road capability was somehow put aside, as it transferred to monocoque chassis, while it also featured independent suspension on both axles. 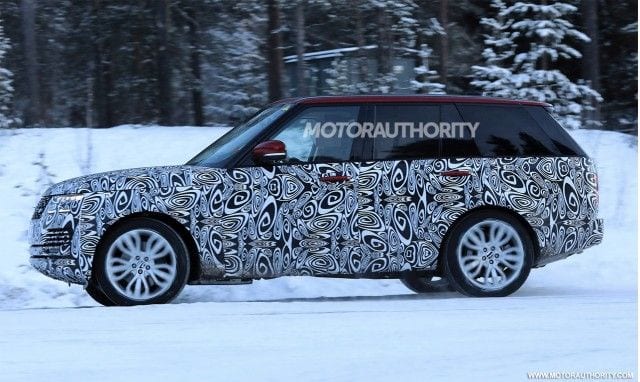 The current generation was introduced in 2012 and it continued success story set by the previous one. Actually, it topped it as this version managed to overrun all sales records set in the past. Only direct rival in Europe is Mercedes GLS and it outsells it by more than double. US market has a different story to tell as there the GLS is leading the pack followed by Cadilac Escalade, but still British are more than satisfied how things turned out to be.

Anyway, to keep it fresh and up to date masked 2018 Land Rover Range Rover is seen in the public, hiding changes that are going to be revealed during this year.

From the spy shots, we see that refresh 2018 Land Rover Range Rover is going to bring new grille and new headlights, which will presumably be in full LED configuration and mild resemblance to the ones on the new Discovery. The car is masked, but hood appears the same, as well as short vertical slats at the side of the front bumper and one large across it, so it is left to be seen what changes might happen in that area.

Nothing is clearly distinguishable at the back, but do expect different tail lights configuration, at least, if shape stays unchanged. Anyway, nothing could actually and properly rival it in its poshness right now and refresh coming with 2018 Land Rover Range Rover model will presumably just further seal the deal giving it edge over competitors.

Range Rover already has a hybrid in its lineup, but masked test mule in photos is a new version that is yet to come. Current hybrid powertrain combines 3.0-liter turbocharged common rail diesel engine, which is actually a very rare case, and 35 kW electric motor while together they produce 340 hp and 516 lb-ft. The new hybrid will choose a more traditional approach and utilize I4 petrol engine besides electric motor.

This system in new generation vehicle was presented on Range Rover Sport Concept_e PHEV, and besides Range Rover, it will settle in Sport model also. Apart from the new hybrid, rest of the lineup should remain, so supercharged 3.0-liter V-6 delivering 340 hp or diesel 3.0-liter V-6 boosting 254-hp. Top of the line supercharged 5.0-liter V-8 will continue to produce 510-hp or 550-hp, while all of them are joined by 8-speed automatic and 4WD.