Kia is obviously blossoming as its appetites are growing by each day. From the outer margins of the automotive world, through years it traveled to the point of offering large full-size sedan as Cadenza or going even further to the sacred ultimate luxury territory with K900. When almost all segments were filled it turned to the imagination, and we were granted hybrid Niro, which, believe it or not, entered Guinness book of world records as the hybrid vehicle with lowest fuel consumption in the world, capable of reaching 76.6 mpg.

It even ventured into the all-electric territory with boxy and funky looking Soul EV reaching sales figures that surprised even Kia itself. Japanese were preparing even spicier things as 2011 GT concept gave glimpses of future direct attack on German premium trio. Nobody should think that GT was just for showing off and after some time has passed, welcome 2018 Kia Stinger. 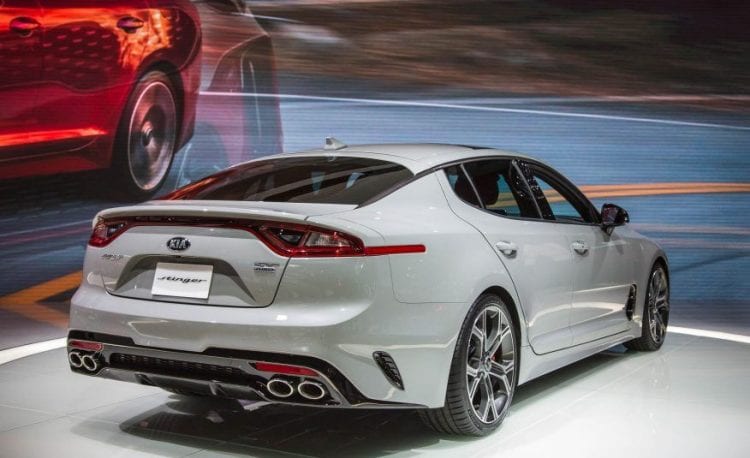 Stinger is two things. One is four door coupe or more of a fastback, and other is a sport sedan. If it missed second part, it would rival VW CC, but in this case, it goes against BMW 3 Series, Merc C-Class or Jag XE. More streamlined brands in the world of medium sized sedans, which is inevitably dying since the birth of crossovers, are competing in offering as much space as they can get at the back or in the boot, while premium trio sticks to a different recipe, keeping its small dimension while offering lavish driving impressions. Besides being outside of the world of luxury brands, 2018 Kia Stinger intends to hit exactly there, hence the name maybe.

It is hard to be visually understood as it stands before you. It is Kia, yet it doesn’t feature any of the brand’s styling cues, apart from “tiger” grille. At first, you will be overwhelmed, it is so much different design stuck into one body. You may see it as pandemonium or even tacky, more suitable for the Chinese market, and then comes second and third glance and as more you gaze at it, it gains more and more sense.

It is striking, it is different, and its sheer boldness will eventually hit your feelings at the right place, and you’ll start to love it purely because of it. As a result, you end up being fond of its vertical slats in the front bumper, puzzling headlights, gorgeous roof line and inexplicable lines emerging from tail lights. All praise for Kia’s bravery. 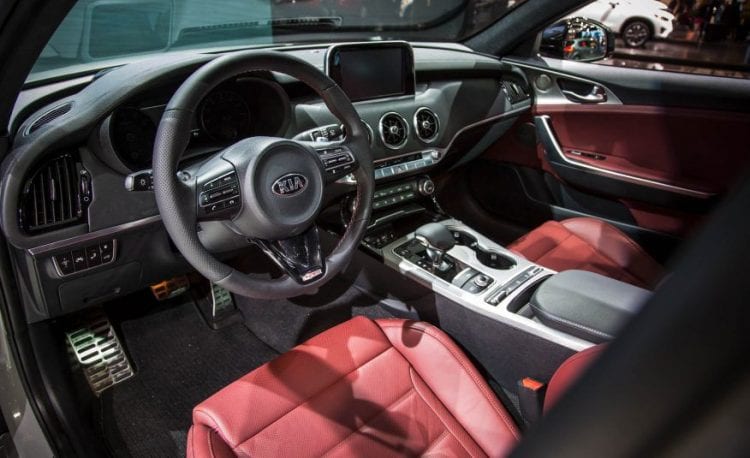 It is not firsts time that South Korean company has to show some luxury aspirations in the field of interior, as just simple segment affiliation of K900 makes it mandatory. In this case beauty, elegance and style refinement has propelled brand into the unfamiliar waters. It is just that this level of design sophistication was not expected, as it is something totally breaching everything that we saw from Korea so far and it appears totally contrary to the exterior commotion.

Center air vents and their positioning is idea clearly stolen from Merc A-Class, but who cares, as their simulation of jet turbines and their placement on gorgeously sweeping, unfussed upper part of the dash is plain astonishing. Just above them sits the main ornament in the form of a classy 8-inch touch screen, outlined in chrome, adding to the overall sense of graciousness. It still can’t exactly rival German premium in build quality and refinement, but this is as close as Kia can get for now.

Desiring to be considered as the sport sedan, it must be capable of delivering a proper punch on back roads. And for that on the paper, it seems that it will. Base offer is 2.0-liter turbocharged I4 producing 255 horsepower and 260 pound-feet of torque, while the top offer is 3.3-liter twin-turbo V-6 boosting remarkable 365 horses and 376 lb-ft of torque, presumably enough for reaching 60 mph in 5.1 seconds, making it fastest Kia on the market, even quicker than K900 V8 delivering 426 hp. And yes, that is in the company of BMW 340i, and well above Merc C400.

Both engines are paired with 8-speed automatic transmission also featuring torque converter, and expectedly shift paddles since it is all about driving enjoyment. And of course, it is rear wheel driven with limited slip diff, preventing any wastage in wheel slips, pretty much as every sports sedan should be, while AWD helped with torque vectoring exist as an option. To complete the whole picture, the suspension is adaptable offering several driving modes.

2018 Kia Stinger is about to go on sales in fall of 2017 and you have enough time, to sum up, the whole story in your head and decide whether it is worth of you hard earned money. It will be priced as a premium product, something new for Kia, while refinement is not yet there and dimensions are clearly way over the rivaling premium more compact sizes, which we hope won’t spoil its driving credentials.

On paper, it has plenty to be considered as the worthy adversary and being matched against conservative style and appearance of European opponents it has its special card of boldness and uniqueness to play on.