Whether you are aware of it or not, Hyundai Elantra is one of the best-selling cars in the world. It populates top 10 charts regularly, and Middle East streets are crowded with these cars. It is the most reasonable offer from one of most reasonable brands, the first choice that can actually accommodate you whole family inside in relatively comfortable manner and take a decent amount of your luggage. The current version was introduced in 2015, playing more important role in US market, since Europeans have a bigger inclination to hatchback body which is designated as i30 over there. The second generation of i30 was sold as Elantra GT in the US and Canadian market, while the third one has just been revealed in September last year, so naturally 2018 Hyundai Elantra GT is on the way to US shores with debut set for Chicago Auto Show this month.

2018 Hyundai Elantra GT with a Turbo and a Manual

Hyundai officially revealed the all-new 2018 Elantra GT at the Chicago Auto Show. The model seems to be the North American version of Hyundai i30, and the automaker says that one of the biggest improvements here is the fact that the vehicle is lighter and stiffer compared to the outgoing model.

The 2018 Hyundai Elantra GT will be offered with two powertrain options first of which is a direct-injected 2.0-litre engine for entry level that is good for 162 hp and paired with six-speed either manual or automatic transmission. The second one is for the GT Sport that has a turbocharged 1.6-litre engine which produces 201 hp and is paired with a six-speed manual or seven-speed dual clutch automatic gearbox. 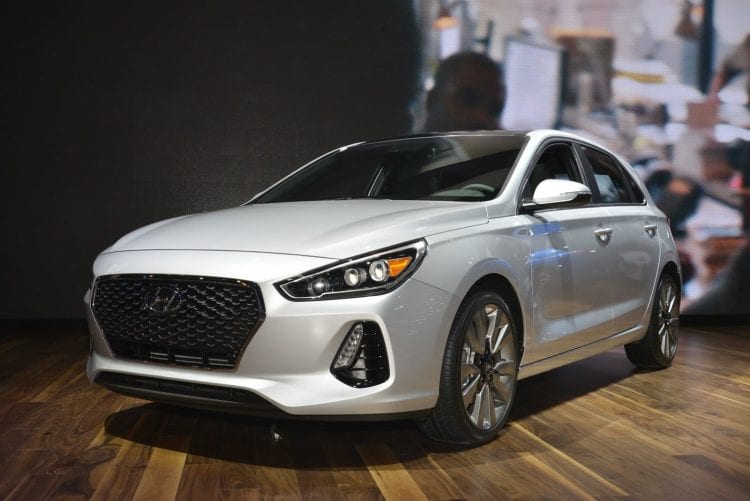 Hyundai Motor America’s director of product planning, Scott Margason stated that “The new Elantra GT brings more to the North American shores for the 2018 model year. More space and features inside. More aggression and European flair outside. And more options under the hood. I’m particularly excited to showcase the GT Sport, a true hot hatch.”

The automaker is particularly proud of the new vehicle which it tested at the Nurburgring to check how it rides, handles and to explore its durability. The Elantra GT Sport will feature 18-inch alloy wheels, large brake rotors at front and rear and a multilink setup at the back instead of the torsion beam that packs the 2.0-litre model. 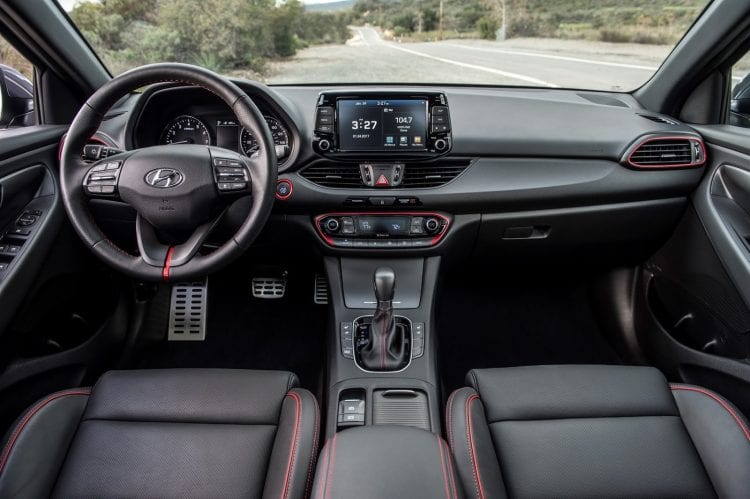 Also, this vehicle will get the latest version of Hyundai’s Blue Link remote start feature through which you can operate the rear defroster and heated side mirrors using the climate control. The system can also be used via Amazon’s Alexa-enabled devices.

The 2018 Hyundai Elantra GT will hit the market in the summer season of 2017.

Expect the same thing seen on European i30. That would include new grille shape and looks, which differs from one seen on current Elantra, and a new approach to headlights design. New meshed and chromed circled grille would be the spotlight of the new car, contradicted by simplicity and plainness of the rest of it, especially when looked from the rear. Known Hyundai Fluidic Sculpture design approach has been revised, and new Elantra GT is more restrained and conservative looking, in short, less exciting, but that same fact somehow added more to upscale feel of the overall visual impression which should go better with European buyers favoring VW’s conservativism. 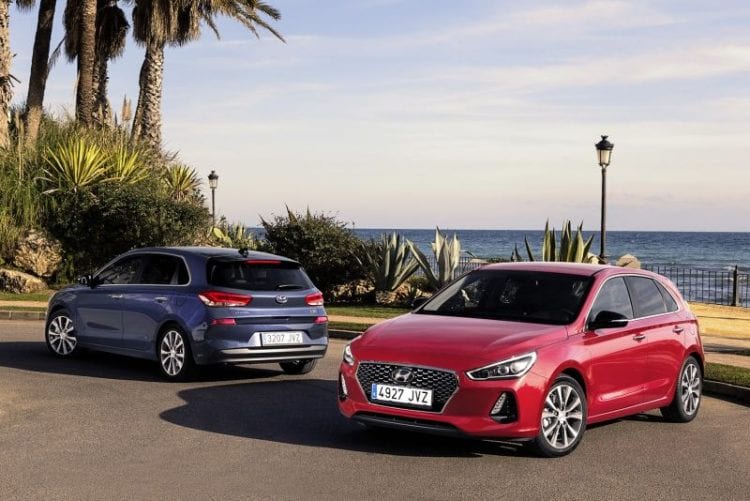 If the new exterior is questionable for some as a step forward, the interior is not. The plasticky feel of the previous generation has been addressed, and new one makes a huge leap in that area. At first glance, it is obvious that quality of used material is pushed up considerably, while the visual aspect of it is also acceptable. The infotainment system is not integrated into the dash anymore as it seats atop of it and pretty much everything is differently shaped than before, we could say in the more tasteful manner. 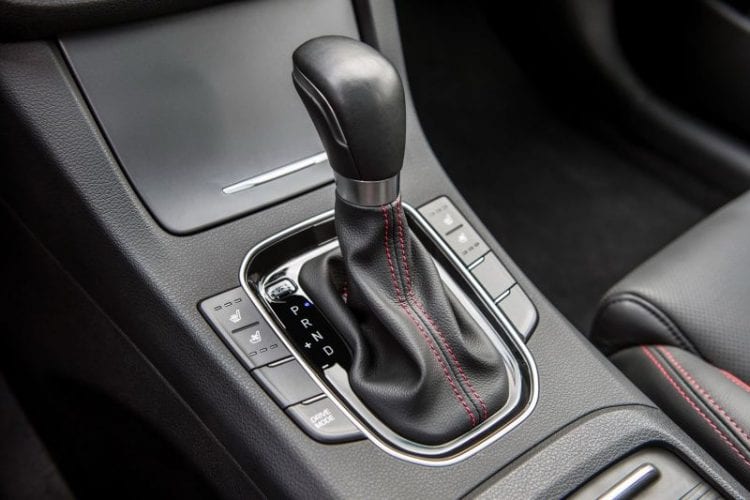 Things in this segment are going to be different between the US and Europe as usual. On old continent i30 starts with 1.4-liter naturally aspirated engine offering 100 hp, then it is followed by modern 1.0-liter turbocharged unit delivering 120 hp. Above them seats turbocharged 1.4-liter I4 boosting 140 hp as the current top offer. On the diesel front, we have 1.6-liter engine pumping out from 95 hp to 110 hp and ending with 136 hp. We should forget about diesel offer in the US, and since current Elantra is powered by 1.6-liter with 128 hp or 2.0-liter with 147 hp, that is something that will presumably power new GT model also.

The best thing would possibly be the use of new 1.6-liter turbo rated at 201 hp, currently shown in Elantra Sport mated with the 7-speed dual clutch transmission, contrary to the manual or 6-speed automatic options for the regular versions. Since the hottest N version is expected in Europe, hopefully, US will also have a chance to taste 2.0-liter turbocharged inline four that is certainly going above current top 201 hp from Sport model. 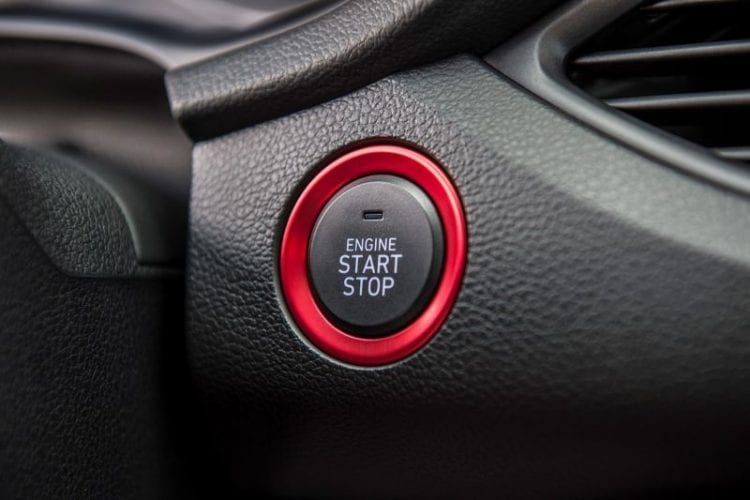 The US has never been too fond of hatchback shape, and that isn’t going to change with 2018 Hyundai Elantra GT. Also, the new model is designed to appeal European taste, which usually contradicts US one, just take a look at VW’s poor popularity in America even before Dieselgate. That means that sedan twin is going to continue to run the story, especially keeping in mind that hatch could ask additional $2,000 over $17,000 starting price of the sedan, and we don’t see upscale interior compensating new price tag along with conservative looks, at least not from this side of Atlantic ocean.