01/23/2017 Update: Honda finally gave us a quick view of the interior of 2018 Honda Civic Type R. The officials from Japan still call this vehicle a ‘prototype’ but the model presented at Montreal won’t be all that different from production one. The Montreal presentation is the first time that Honda allowed everyone a look at the inside of its favored sporty hatchback. Most of the equipment will be shared with standard Civic but this being a sports version there are some noticeable differences. The first thing that takes our intention is a red color. The interior of Type R prototype features a lot of red; on the dash, seats, doors, and steering wheel. The seats are like it can be expected from Honda’s popular sports hatchback a Recaro ones. Unlike regular Civic, 2018 Honda Civic Type R has a metal shifter, some carbon-fiber details, metal pedals with holes in it ( that’s sports version of Civic for you) and has two drive modes – Comfort and R. How the interior looks you can see in the photos bellow.

The current Type R is only being sold in Europe, and so far it has been trumped by the new Focus RS or even the Golf R. In order to get back up there and compete with the best, it seems that a new model will be with us sooner than expected. The 2018 Honda Civic Type R should be released in the early 2017 and go on sale in Europe and the US shortly after that. This would be the first time the Type R would be offered on the US market which started to love little hot-hatchbacks quite recently.

Even though we are still in 2016, we are already getting excited for the vehicles that will come next year. One of which is the new Civic Type R and Honda wants it to be as fast as possible because they have set their eyes on the FWD Nordschleife lap time record.  The current ‘Ring record holder is the Volkswagen Golf GTI Clubsport and Honda aims at beating it in 2017.

Honda’s current record at the track mentioned above is 7:50:63 and the Japanese automaker wants to improve it, as CarBuzz reports. When asked about this, one of the Honda’s PR spokesmen told CarBuzz, “I think it’s fair to assume that we’ll pursue our own personal best record, and if it beats out other cars that have run the ‘Ring, even better.” Although this record is meant to measure production car’s lap time, many have engaged in slightly bending the rules and Honda is no exception. For this occasion, Honda got rid of the air conditioning unit in order to compensate for a heavy roll cage and VW removed the rear seats for their record run. 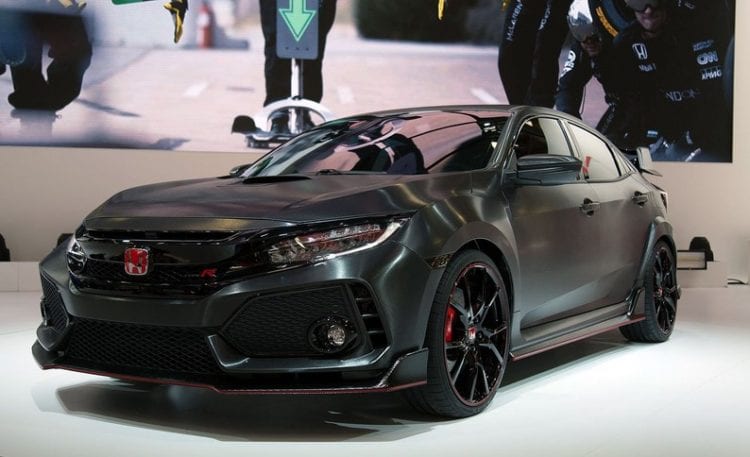 The current record holder is the Clubsport S which is a rally style edition that has lost a lot of weight to achieve the best result. That vehicle had a smaller and lighter battery, but also, in their further efforts to lose more weight company decided to remove some of the sound insulation, armrests, and floor mats. Honda is not a stranger to these weight losing tricks since the late ‘90s Integra Type R featured even modifications as a thinner windshield. However, the Clubsport S was an exclusive vehicle, and only 400 were made, whereas the Civic Type R will be available to many more customers, so radical weight losing changes should not be expected.

Paris Motor Show was a host for another prototype launch, the Honda Civic Type R. Design is more than impressive, and we really like this new look but what we didn’t like is the fact that it will not come with 400 hp as we could hear previously in few reports and rumors.

Head engineer for the development of Type R stated that this model would bring slightly less power and that it could be offered with about 320 hp. Even with “only” 320 hp, if that comes with the production version, we think that it will be a pure fun to drive and a worthy competitor to far more powerful sporty cars. 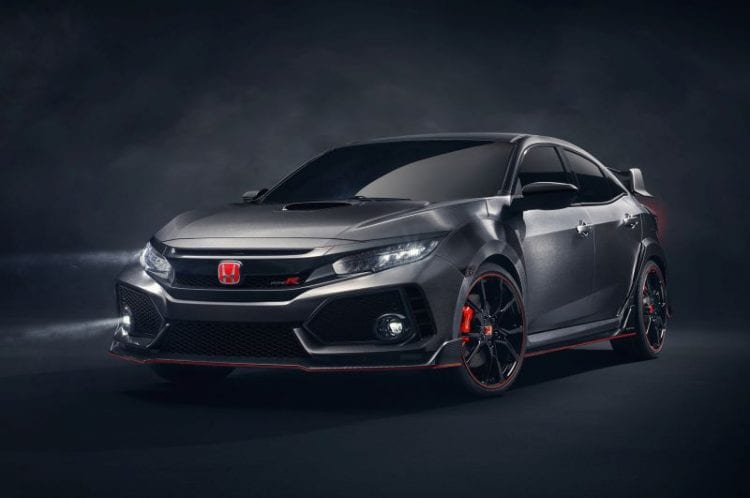 Let’s immediately start our update with the engine that will be implemented here. Same 2.0-liter VTEC turbocharged gasoline powerplant will come but this time with 320 hp as we already mentioned. This four-cylinder unit will allow small hot hatchback to accelerate from 0 to 62 mph in about 5 seconds. We still do not have any details about top speed, quarter mile run, and other performance figures.

From the man in charge of development, Mitsuru Kariya we could hear that they could add all-wheel drive and a larger engine that could offer a lot more power and better straight line performances, but he also added that this would have a price. The price that they are not ready to pay. It would significantly jeopardize the balance of vehicle, and they want to keep it light as currently is. They are more interested in dynamic performances and handling then just simply inserting a lot more powerful unit and connecting it to the four-wheel drive system.

Good news for us and all lovers of Type R models is that Honda decided to make this vehicle and make it available pretty much immediately after the launch of new Civic. Previous versions were only introduced after the second half of the generation life.

As we mentioned, there are few other things we need to wait and see. These include price and final power output as we get around 320 hp figure. European market should see this vehicle during the summer of the next year while the US will have to wait a little bit longer. Late 2017 or early 2018 seems the right time for us to get one.

More details on it

Unlike the current version, a new generation of the Type R is going to be based on Honda’s new modular chassis. This has been released with the latest generation Civic, and it is a massive improvement over the older one. The platform is stiffer, more capable and offers much better NVH levels insulation. These should allow the new Type R to be at least more capable on paper, but we are quite sure that Honda will do some magic with it. The price of the car is still unknown, but early rumors suggest little over $30,000. This is still more than some of its rivals, but it should be well worth it for the performance returned.

Recently, many people suggested that the 2018 Honda Civic Type R would be based on the coupe body vehicle. However, this now seems to be not true. In fact, the car will most likely be offered in hatchback form only, but this remains to be confirmed by Honda in the future. All the test mules spied so far used the body of the hatchback with many modifications. 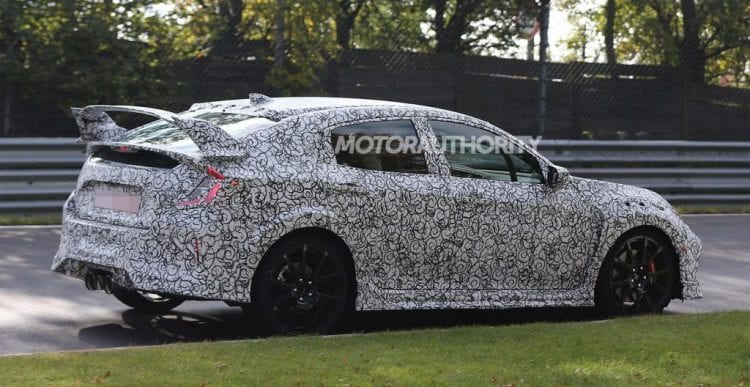 The front end seems a lot more aggressive than before, and it looks that the car might take some of the design found on the current European version. Furthermore, at the back, there is a much larger wing than on previous models, and it also seems to boast a large diffuser. The test mules were riding on 19-inch rims, but these might get changed to smaller ones during development. As standard, 13.7-inch disc brakes up front will be used which are larger than many brakes on high-end muscle cars and supercars. 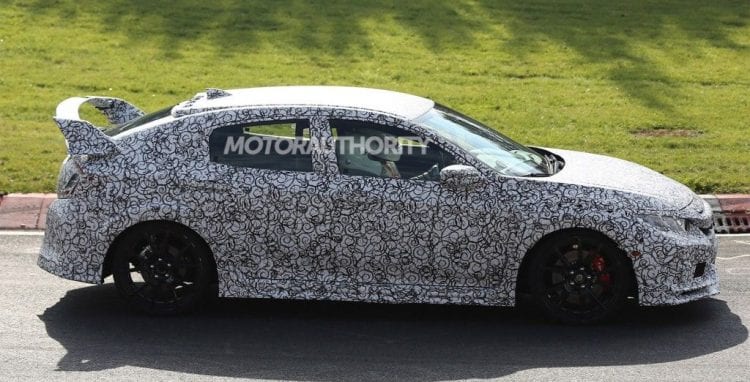 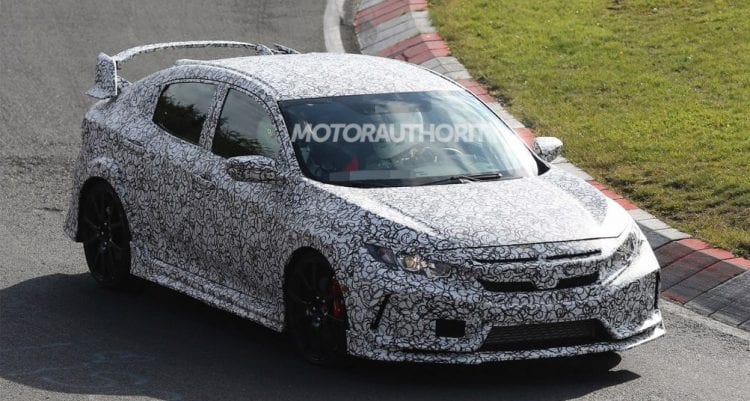 It is a well-known fact that hot hatchbacks don’t exactly excel inside the cabin. Here, the new Type R will likely be very similar to the ongoing Civic with a few upgrades. For starters, the car will get new seats, most likely provided by Recaro, a new steering wheel, better upholstery with contrasting stitching as well as a new instrument cluster. 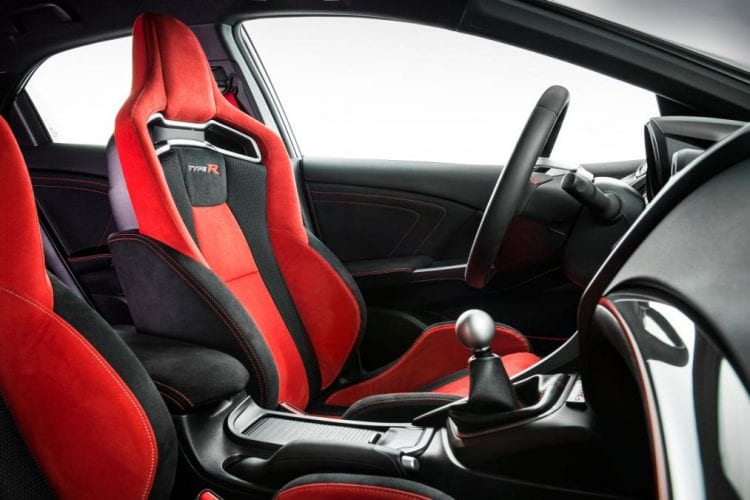 The main selling point of the 2018 Honda Civic Type R is going to be its engine. Even though not official at this stage, the car will most likely use the 2.0-liter turbocharged inline four currently found on the European Type R. This engine will be made in the US in the future, and it will be upgraded from the current 305 horsepower and 295 lb-ft of torque. Rumored figures suggest that it could even reach 250 hp, but that is quite optimistic, and we think that it will be producing 320 to 330 hp. While less than the Focus RS, this vehicle should be more than capable of keeping up during hard cornering. 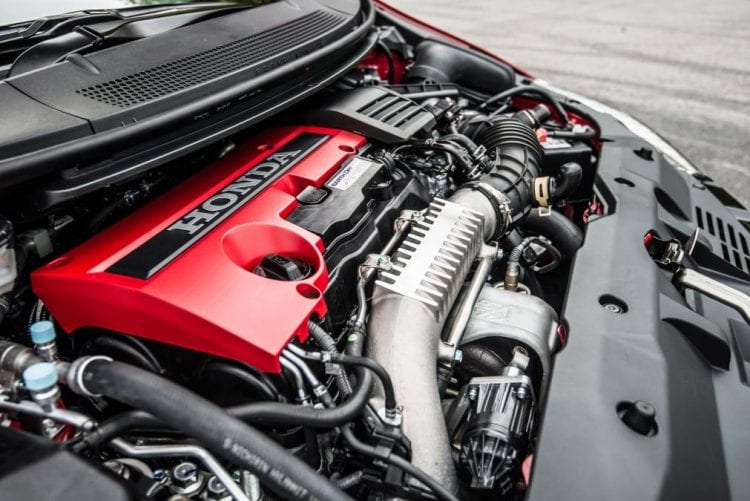 An interesting fact about the car is that it will be front wheel drive and not all wheel drive. This has been made clear by the test mule which was definitely front wheel drive. In order to keep the torque steer under control, a new suspension system will be used at the front which should also maintain the car a lot better connected to the ground. Also, like its main rival, a six-speed manual gearbox will most definitely get used on the production version.