Accord is one of Honda’s top selling models. As such, it found its way to one of the World’s biggest markets – Peoples Republic of China. This vehicle is being sold there under the name Spirior since 2009, but it failed to reach the level of its global popularity in China. At 2014 Beijing Auto Show Honda Accord Spirior Concept was presented, and at that time it was projected that it would enter serial production by the end of 2015. This scenario didn’t happen, but instead, Honda offered facelifted version for 2016 MY. Now, with Japanese car maker preparing redesign of its Accord lineup on a global scale, they will also introduce 2018 Honda Accord Spirior to the Chinese market.

(don’t forget to read about new 2018 Honda Accord) 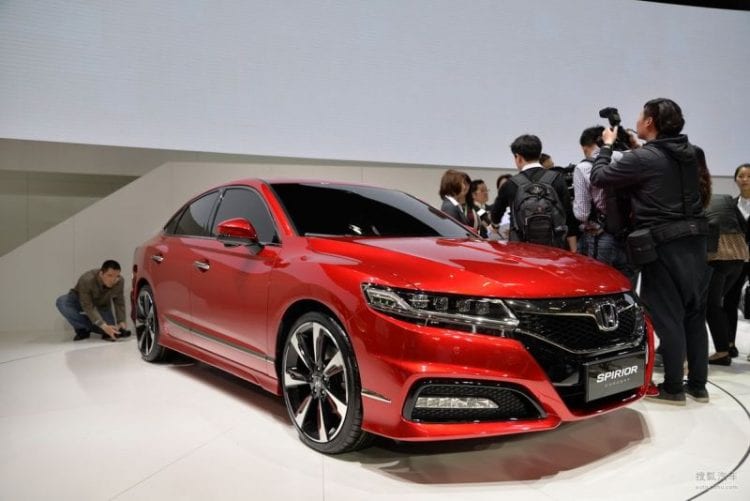 The design of Honda Accord Spirior is long time outdated. After company failed to translate Spirior Concept into the serial model the minor facelift the car underwent last year didn’t do it any favors. Spirior needs to be revamped inside out. With new Accord being still in development phase we can’t say much, but anything close to the original concept which you can see on the photo bellow is good to go.

Interior is even in worst shape than outdoors design. The infotainment system is overrun by the time that passed away since it was last upgraded. The display consists of two separate screens sized around 7.7inch each and we are used to get far more even from cheapest cars. We can’t say where Honda will start with Spirior revamp, but we suggest that they start from the bottom and don’t stop till they reach the top.

Another thing that is outdated is engine options. Considering heavy Chinese taxes on upper scale powertrains, it is surprising why Honda doesn’t put some of its smaller turbocharged units in new Accord for China. Current Honda Accord Spirior has two four-cylinder petrol engines which are 2.0-liter boasting 153 hp and 190 NM of torque and 2.4-litre unit with 184 hp and 243 NM of torque. On the new version, you can expect one of Honda’s new turbo-four units that will fit better with customers and Chinese authorities in terms of taxes as well.

Release date of 2018 Honda Accord Spirior

New 2018 Honda Accord Spirior is supposed to hit the market in late 2017 as 2018 model year. This date of release is the plan for the global market, and we can’t say why it wouldn’t stand for Chinese one also.

The currently available version starts at $24,706 for a base trim and ends at $34,600 for a top model. With complete redesign on the outside which is expected and incorporation of new tech on the inside, the price will certainly go up. Some of the speculations suggest that the 2018 Honda Accord Spirior could start at $26,000.