02/16/2017 UPDATE: The stories about upcoming Ford Bronco and Ranger just won’t stop. And they shouldn’t! We want to know more and more. If we could get everything about upcoming 2019 Ford Ranger or new Bronco it would be an amazing thing. Knowing it all at this point is not realistic, but today we have something new, both for you and for us. The new Ranger has been spied right here in the States entirely covered in camouflage.

Being fully covered test mule of new Ranger hides one of the two things. First thing would be an utterly new design for this mid-size pickup which would be opposite to earlier claims that it will look mostly like the European model. The option which is closer to the truth is that camo hides the completely different body, something that will make new US Ranger more distinguishable from the Worldwide version. American customers are picky so by doing this Ford could make them happy. The solution in between is that 2019 Ranger gets a bit of Euro style and a bit of the US one, with later one being borrowed from current Ford F-150. Anyway, it is too early to claim anything, so we will just wait for it to shed some more camo. 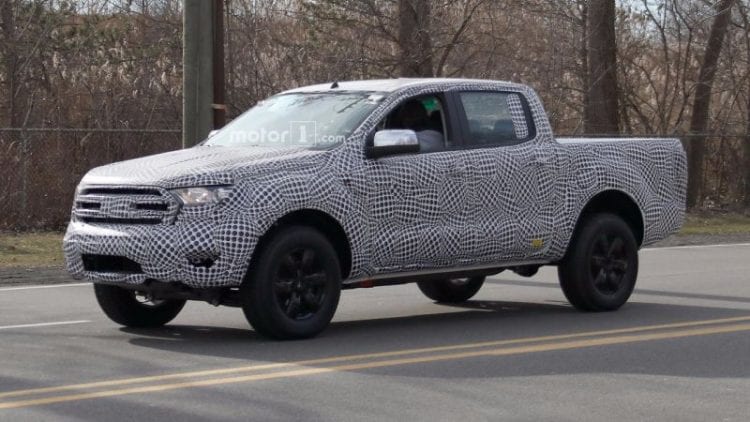 Under the skin, you shouldn’t expect anything stronger than a V-6 mill. Across the Ocean Ranger is available with a variety of diesel powertrains but there are only two options which would fit in the American market. First one is 3.0-liter Lion unit with 254 hp and 440 lb-ft of torque which will be available on 2018 F-150 (making it first diesel F-150 ever). You might notice that it has too much power for a mid-size pickup but output numbers could be decreased to facilitate the new Ranger and also, Ford needs to keep their flagship F-150 model on top in terms of power figures.

Option two would be a 3.2-liter diesel in-line five which is doing well on Ford’s Transit van in America. It produces 185 horsepower and 350 lb-ft of torque. These numbers fit the Ranger well, and we know it because it is already being used by this truck across the world. As far as transmission goes, we can’t tell much at this moment, but GM’s ten-speed automatic could be one of the options.

Ford Ranger 2018/2019: Serious speculations about Ford Ranger returning to the American market started in October of 2016. Now, at the beginning of 2017 at the NAIAS Ford officially confirmed what was rumored for so long. 2019 Ford Ranger is real! It will be modeled on the European version of Ford’s mid-size truck. Not only that Ranger will return to the American shores it will also be built in the United States. The exact location is Ford’s Michigan Assembly. The return of this mid-size truck doesn’t come as a real surprise because it was rumored for several months back.

Another thing is that Ford doesn’t have a mid-size pickup in its lineup and because of that Ranger was in high demand. When asked about possible internal competition between Ford Ranger 2019 and 2018 Ford F-150 Ford (many believe that introduction of a new mid-size truck will lower F-150 sales) Ford officials stated that they feel better when creating competition themselves than to have rival lowering sales for them. Despite the fact that the basis for the US built Ranger will be European truck the models will differ regarding front-end styling, engine options offered and general features. Together with Ranger Ford is planning on bringing back, also long-rumored, Bronco. The news suggests that the later one will use same T6 platform as Ranger does. These two models are the first two of five utility vehicles that Ford claims will release by 2020. 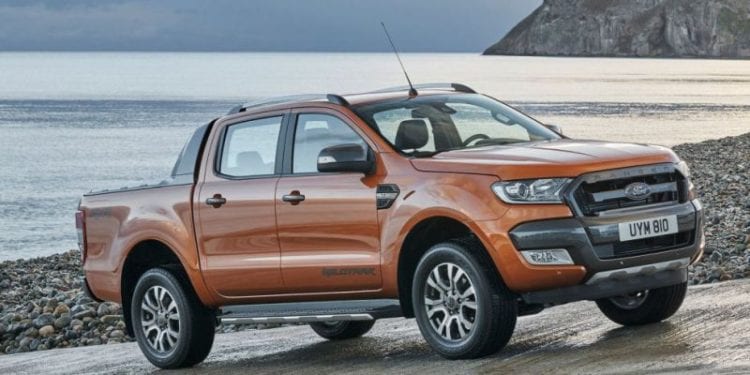 In North America the Ford Ranger (Wiki) has been last made back in 2011 when the truck has been discontinued altogether. The main factors that lead Ford to do this were the problems with the finances and the fear that the truck would steal too many of the F-150 customers. More that five years since it was discontinued and after seeing how well the Colorado and the Canyon sell, Ford finally realized that the Ranger is needed on the US market as well. While they haven’t released anything official, rumors suggest that the truck could be released as the Ford Ranger 2018. This would be right on time to compete with the updated Chevy Colorado. We already talk about 2017 Ford Ranger rumors! 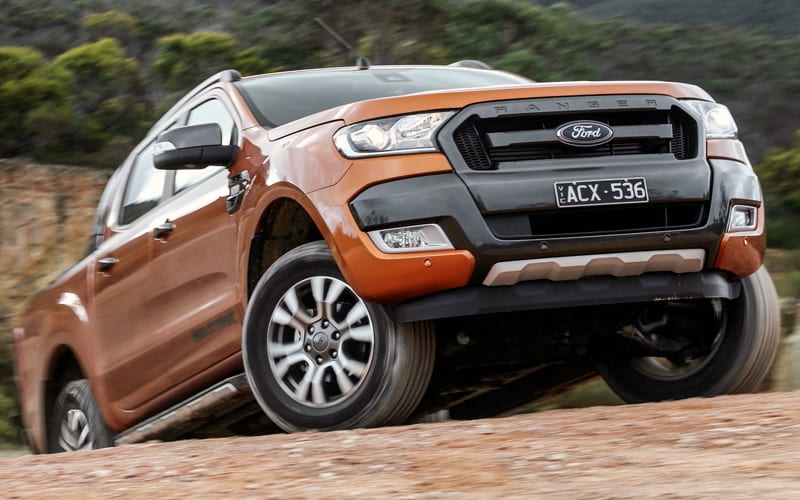 So far we are pretty sure that the US model of the 2018 Ford Ranger is going to be based on the same platform as the current international truck. This means that its chassis will not be fully made out of high strength steel but it will still be quite rigid when compared to the Colorado. On top of that, the chassis would be roughly the same size as that of the base F-150 which was a problem before. However, after seeing that the Colorado didn’t matter on the Silverado sales, Ford is now confident on releasing their mid-size truck.

Don’t forget Ford Atlas ! We still waiting to see new version of this! 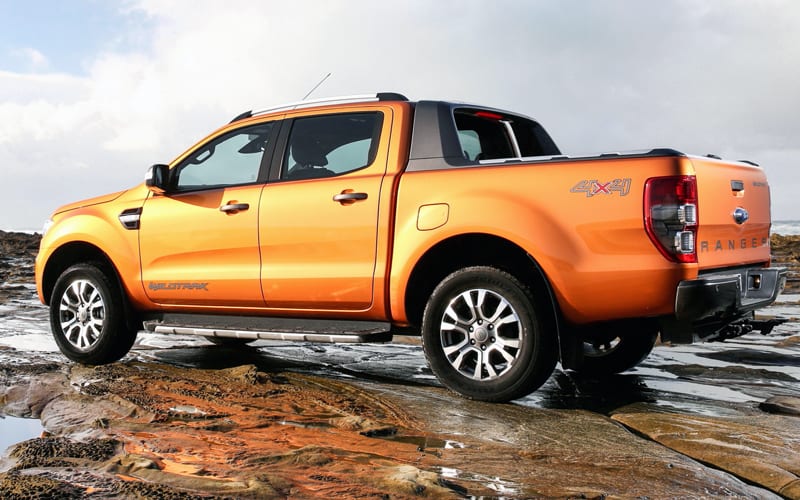 What about design? Anything new @ Ford Ranger 2018?

Even though the rumored 2018 Ford Ranger is expected to share basically the same platform as the international version, the two are going to be nothing alike. The US model is definitely going to receive a different running gear. This should sport a softer suspension system with more travel that will make it more comfortable. On top of that, the design will be all new. In fact rumors say that the US Ranger will look a lot more like the Edge or the Explorer rather than the F-150. The front end is going to be more aggressive and aerodynamic while the cabin will be similar to that of the European model. The bed is expected to be identical as well but some special editions might be released at a later date.

Just like with the Transit which received an overhauled interior when it hit the US shores, the new Ranger should be all new as well. The dashboard, equipment level and even materials are all going to be different. We do hope that Ford will change them for the better and from the looks of it, this might just be true. 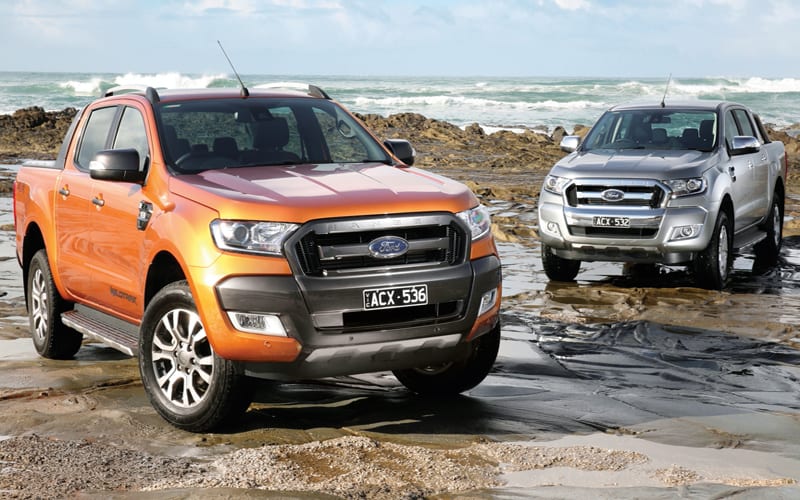 As rumors suggest, the future 2018 Ford Ranger should come equipped with several new engines. The base model is expected to come equipped with a 2.0-liter turbocharged inline-4 petrol engine. This EcoBoost unit should offer around 250 horsepower and 270 lb-ft of torque, better than pretty much any of its direct competitors. For those looking for more it seems that Ford might also install a larger naturally aspirated 3.7L V6. This should easily be capable of delivering more than 330 horsepower and 290 lb-ft of torque, still more than any of its rivals. Even though just a rumor at this point, the most interesting engine will certainly be the 3.2L I-5 turbocharged diesel. This has already proven its reliability and with more than 200 horsepower and 400 lb-ft of torque, it should be more than capable of towing as much as 7,000 pounds or more.

Unlike the European model, this version of the truck is expected to be launched with an automatic transmission. Currently Ford’s 10-speed transmission seems to be the most probable unit to be installed.