02/10/2017 UPDATE: Chevrolet Camaro. It’s not the common thing to start an article about one of Fords’ models by naming a flagship vehicle made by another company and one of its main competitors. The reason for why we did this is, without a doubt, the fact that the 2018 Ford Mustang came out this early with its facelift because of Camaro. The Chevy’s model is already on the market, and it boasts more power, has more tech and improved styling compared to its previous version. Mustang won’t be available for purchase before the fall, but after the set of photos released by the company in January now we have a first real world look at the new Mustang. Photos acquired by courtesy of motor1.com were taken at a press event that preceded 2017 Chicago Auto Show.

We already wrote about changes on 2018 Ford Mustang, but here is the reminder in few short lines. The biggest changes happened up front where thanks to the sharper headlights and lower bumper ‘Stang now has new kind of aggression. At the back, we have new exhaust pipes and new diffuser attached only to a GT version of Mustang. 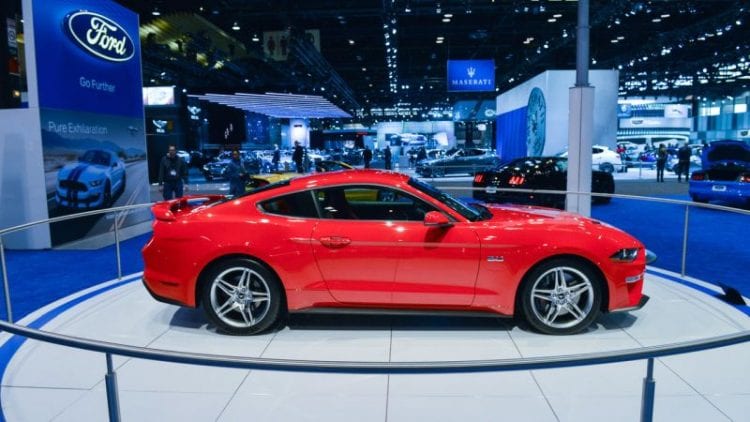 Moving onto the interior and we have some more changes. At first sight, it might look the same, but we have new infotainment system which consists of now larger gauge cluster which covers most of the dashboard. The screen behind the wheel is adjustable and reacts differently depending on the drive mode of your selection.

Putting aside design changes we also have a few differences under the hood. This is a little unusual, but with 2018 Ford Mustang we have fewer options to choose from in engine department. The V6 that most people were accustomed to as an entry point was honorably dismissed from the service. In its place, we now have 2.3-liter turbocharged inline-four in regular Mustang while in 2018 Ford Mustang GT you will find a 5.0-liter V-8. The following powerplant was reworked a bit and now is equipped with the direct injection system.

The power is channeled through an either revamped six-speed manual or through a ten-speed automatic which is a product of joint work of Blue Oval and General Motors. Both gearboxes send the power only to the rear wheels, but you already knew this. So far Michigan car giant didn’t release output numbers for this model (wouldn’t we want to know) so stay tuned because we will fill you in as soon as the information becomes available.

Same as before new 2018 Mustang will be available in coupe and convertible shape.

In the end, we would usually talk about price or fuel economy, but Ford, same as with the output didn’t disclose these. More info is coming your way in coming days, weeks and months so stay tuned.

01/22/2017 UPDATE:2018 Ford Mustang was officially presented by Ford through a set of photos and videos. The car will look unchanged to an untrained eye, but it has quite a few subtle touches that give a meaner look to new Mustang. The part of the car that received the biggest update is the front end. Front fascia received a minor facelift. The hood is lowered by 20mm so new Mustang has a wider stance and somehow more aggressive shark-like look; the grille is octagonal and larger by few inches, so the entire car looks bigger. Headlights also received small updates, and now they are more in synergy with rest of the vehicle. These changes don’t look massive but put them all together, and you have yourself a new Mustang. At the back, improvements are minor but also noticeable. Taillights now look slimmer and more moon-like, and the rear end is spiced by a new diffuser.

With exterior changes being this subtle, fans of Ford Mustang were more curious about changes under the hood. 2018 Mustang Ford didn’t disappoint here. Unfortunately V-6 is gone. In its place, we now have 2.3-liter turbocharged four-cylinder EcoBoost and 5.0-litre V-8. Both of these engines will receive power increase for 2018 MY, but Ford didn’t disclose the numbers so far. The transmission will come in shape of a six-speed manual and Ford’s new ten-speed automatic gearbox. This kind of transmission can be found on Ford F-150 Raptor and Chevrolet Camaro ZL1.

On the inside, Ford Mustang 2018 will mostly remain the same as the previous installment, but there are few differences. Among others, speedometer and tachometer are now presented on a new 12inch digital display, and the rest of dashboard is somehow Audi-like. As far as equipment goes it si worth of mentioning that new Mustang is going to receive MagneRide magnetorheological adaptive dampers both on EcoBoos and GT models.

In the end, le’t say something about the convertible version of 2018 Ford Mustang. The convertible looks absolutely the same as regular models minus roof of course. Interior, exterior and engine department are the same.

Ford’s Mustang is an iconic car. It is a car that has been sold over 600,000 units in 1966, a number that many models don’t achieve in their whole lifespan. Sixth generation was introduced in 2014, and by Ford’s new strategy it went global, offered even with right-hand drive setup. Strategy paid off as new Mustang, among other things, became best-selling sports car in Germany, almost unprecedented, keeping in mind Germanic patriotism in buying their vehicles. While competition never sleeps, new Camaro came as a quicker option in almost all trims and new Challenger could be around the corner, nor Ford does, so available spy photos suggest what could we expect for 2018 Ford Mustang.

Camouflage seen on photos is properly conducted, but we can point that redesigned LED headlamps are to be expected in combination with mildly altered grille and larger air intakes. At the rear, lights were on operating table and possibly we can assume that rear bumper could be revised with diffusor and different exhaust shapes. 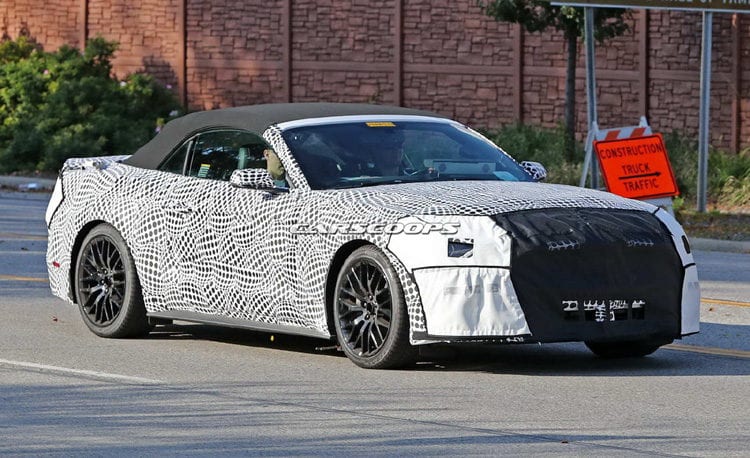 Expect no changes here, apart from a potential increase of power, although in a mild manner. So, entry point would be still 3.7-liter naturally aspirated unit with 300 horsepower and 280 pound-feet of torque, and a possible increase could cause it to have around 320 horses and 300 pound-feet, which would decrease 0 to 60 mph time to 5.9 seconds. The most reasonable option will stay as turbocharged, 2.3-liter, four-cylinder EcoBoost, with 310 horses and 320 pound-feet of torque with a potential of up to 330 horses and 340 pound-feet, which lowers the sprint from 0 to 60 mph to five seconds. 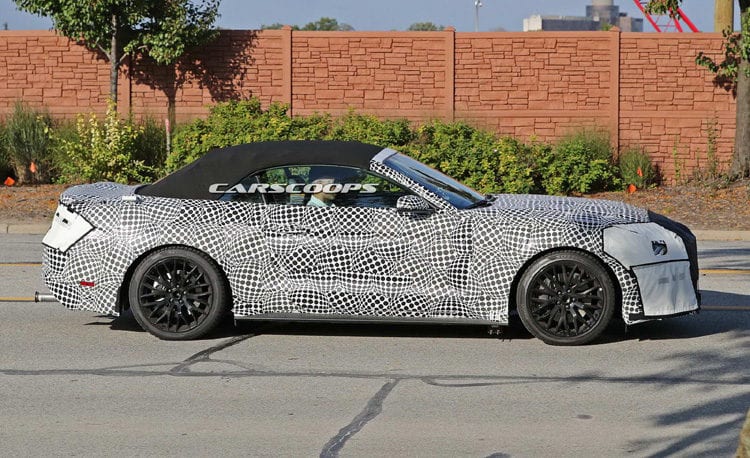 As special choice remain 5.0-liter “Coyote” V-8 with 435 horsepower and 400 pound-feet of torque, but now possibly with at least 450 horses and 420 pound-feet, which would give it more self-esteem while standing next to Camaro SS. Expect the 0-to-60 sprints drop to around 4.3 seconds with the automatic transmission. Expect revised Getrag, six-speed manual gearbox, but for auto, we could get a totally new 10-speed unit that Ford developed together with General Motors. Other possibilities for the improvement could be the larger radiator, stiffer springs, a new limited-slip differential, and larger brakes.

Six generation Mustang brought for the first time an independent rear suspension, replacing antic ideas of the past and introduced four-cylinder Ecoboost engine, making it more desirable for European buyers. Track times outperforming BMW’s 4 series were unimaginable before. Everything proved as good sales recipe and 2018 Ford Mustang seen on pictures doesn’t have to put much effort to keep it at the top.