The U.S. has always been left out of Ford’s hottest offerings (well of hatchbacks at least). Most of the performance hatchbacks have only been delivered in Europe. This was the case until the Focus RS arrived that is. Essentially an upgraded and better version of the Focus ST, a car which is a better version of the standard Focus, the RS aimed to be the flagship Focus. With 350 hp and 350 lb-ft of torque, it achieved its goal too… almost. Without even having time to settle and enjoy its glory as the fastest Focus ever, the RS seems to be getting kicked out of that spot thanks to the brand new Focus RS500. The name should ring a bell to most car enthusiasts. The same RS500 badge was used in 2010 on a vehicle which even back then one-upped the Focus RS of the time.

Well, a brand new Focus has just been caught during testing at the Nurburgring, and it certainly appears to be the new RS500. It’s far too different from the standard RS version to pass as one of those (despite the RS badge at the back), not to mention angrier and mean looking. Without further to do, we give you what is hopeful, the new Ford Focus RS500 that will be introduced as 2018 model. 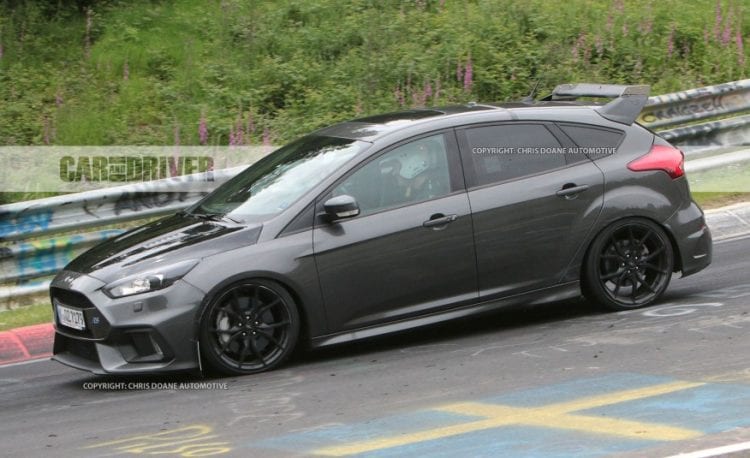 Changes to the RS500 are miniature but visible. It sports a visible amount of extra aggression from the outside, but it isn’t that striking compared to previously offered hot models in Ford’s lineup. The front fascia, front grille, and air dam have been left virtually the same. The very top of the fascia seems to be tilted more to the front now, giving the Ford emblem a much more dominant display. The lines at the front are the same, as is the hood. It does now sport a functioning vent on each side of the center hump, however. You’ll also notice it has inserted at the front surrounding the air inlet closer to the corners of the front fascia. The standard RS has just inserts, with the RS500 sporting a functioning vent (the inner hole), giving better airflow for the front brakes keeping them cool even on track and in heavy usage. 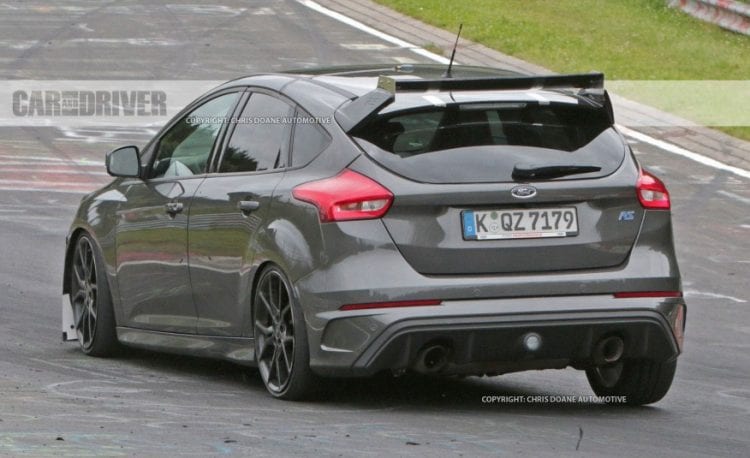 The profile of the car in the photos has the same line and design, but it appears to be more raked. It also looks like it is sitting lower but on closer inspection, we can see that the small wheel gap between the wheels and fenders is gone here most likely due to the different wheels. Speaking of wheels, the car sits on five double-spoke alloys with a black finish, which appears to be an inch bigger than those of the RS. They still manage to clear the fenders when fully turning, so that’s a good sign.

The back segment is the same, perhaps even featuring fewer changes than the side profile. The rear diffuser is the same as is the rear fascia. The only things that are different are the taillights. They now have a different layout, with the amber colored light being positioned on the outside of the lens center. The spoiler at the top of the rear window appears to be modified too. It sits lower and is more optimized for downforce, something that you need to keep full control over this sports car. It may not be that functional since we are talking about a hatchback after all, but it is very cool looking. Combine everything together and you have probably the best hot-hatch at the moment. 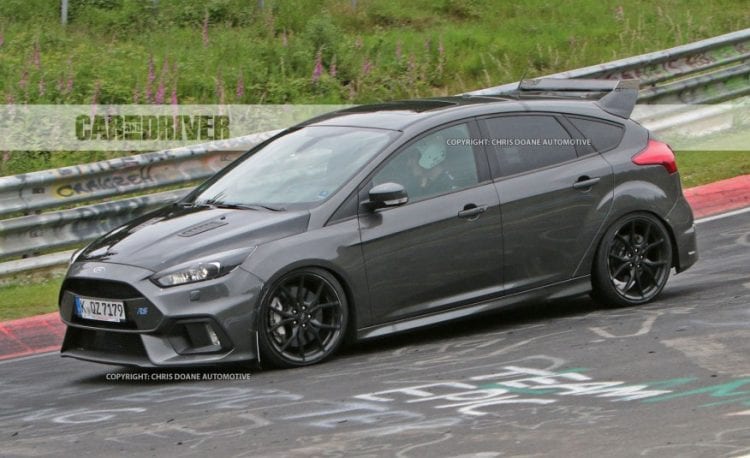 At the time of the writing of this article, there are now spy shots from the interior of the RS500. These are provided from a hot lap of the RS model, and we can agree that it does look like one quite capable vehicle. It’s just how things go. Regarding the interior, knowing Ford, we’re expecting the same interior as for the RS. Cost savings have to be done somewhere in a car such as the RS, and it almost always goes in the way of a slightly more compromised cabin (the way it should be done, rather than compromising performance). With that said, the RS isn’t exactly a barn or a tractor inside.

It’s got one of the best interiors for its segment. The RS500 may have better sports seats at the front compared to its RS cousin, and we wouldn’t be surprised if it also came with five-point harnesses as we know that it will be pushed hard, at least on track. The steering wheel will probably have a flat bottom too and a few extra knobs here and there. Although very unlikely, it is possible that the instrument cluster will go fully digital. Ford, if you’re reading this: please do it. 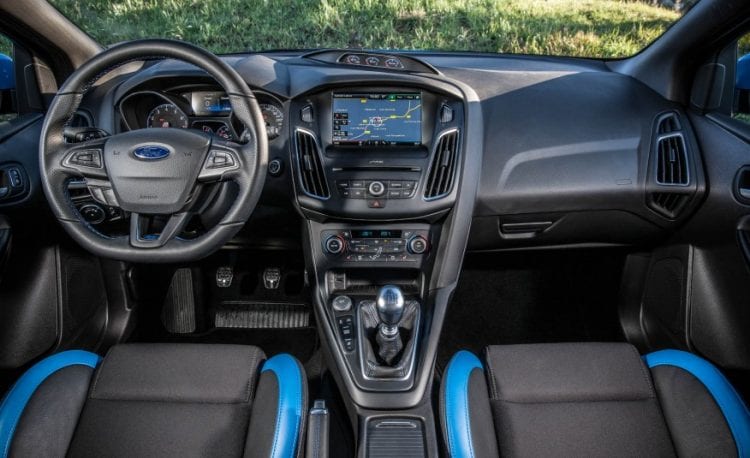 We haven’t even seen the interior in its full glory so we’re afraid to say that we also can’t report back on what kind of an engine it will be carrying. It’s got to have more than 350 hp and 350 lb-ft of torque, that much is a given. The whole point is to top the RS and in order to do that, it has to trump those figures which we’re sure it will easily do. The question here is: how? Well, the 2.3 four-cylinder EcoBoost is nearing its limit with 350 hp but we’ve talked to some experts, and they claim it can be pushed even further still.

We know that a lot of small 2.0-liter blocks can push well over 500 horsepower but remember, we’re talking about a factory vehicle with a warranty that needs to handle everyday drive and even track days where it will be pushed to its limits and not break. They can’t build it, so it lasts a couple of thousand miles only. It needs to run reliably for years and miles to come. Using a larger turbo or a set of smaller ones could push the block to greater hp numbers safely, and fine tuning it will give a little bump too. We could very well see a small V6 under the hood, but the chances of that happening are slim. Ford has the 2.7-liter V6 EcoBoost we saw in Mustang and few other models and this one certainly is an option here also. 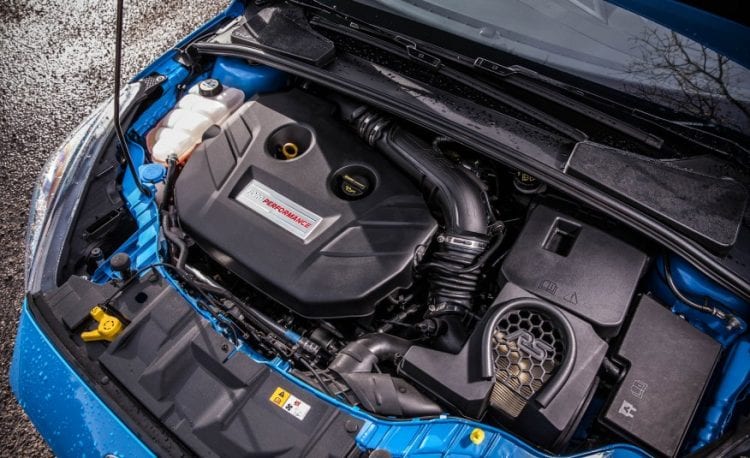 The name RS500 originally stood for the production run: just 500 cars. If that’s the case now as well, you better start saving up. Here’s our alternative, however: the 500 stands for horsepower and they make a lot of RS500’s satisfy demand. Sounds a bit optimistic? It probably is.